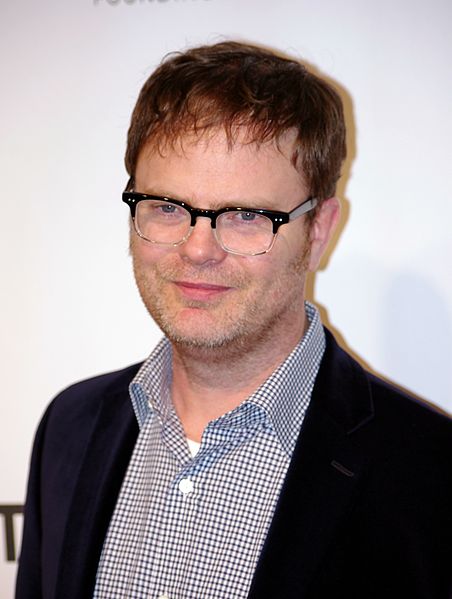 Rainn Dietrich Wilson (born January 20, 1966) is an American actor, writer, director, and producer. He is best known for his role as Dwight Schrute on the American version of the television comedy The Office, for which he earned three consecutive Emmy Award nominations for Outstanding Supporting Actor in a Comedy Series. A native of Seattle, Wilson began acting in college at the University of Washington, and later worked in theatre in New York City after graduating in 1986. Wilson made his film debut in Galaxy Quest (1999), followed by supporting parts in Almost Famous (2000), Steven Soderbergh's Full Frontal (2002), and House of 1000 Corpses (2003). He also had a recurring part as Arthur Martin in the HBO series Six Feet Under from 2003 to 2005.

In addition to acting, Wilson published an autobiography, The Bassoon King, in November 2015, and also co-founded the digital media company SoulPancake in 2008.

Wilson was born at the University of Washington Medical Center in Seattle, Washington,[1] the son of Shay Cooper, a yoga teacher and actress, and Robert G. Wilson, a novelist, artist, and business consultant who wrote the science fiction novel Tentacles of Dawn.[2] Wilson has Norwegian ancestry.[3] From ages three to five, Wilson lived with his father and stepmother, Kristin, in Nicaragua before they returned to Seattle after their divorce.[4] He attended Kellogg Middle School and Shorecrest High School in Shoreline, Washington, where he played the clarinet and bassoon in the school band.[5] He transferred to and graduated from New Trier High School after his family moved to Wilmette, Illinois, to serve at the Bahá'í National Center.[1]

Wilson attended the University of Washington in Seattle, graduating with a bachelor's degree in drama in 1986.[1] He then enrolled in New York University's Graduate Acting Program at the Tisch School of the Arts where he graduated with a MFA in acting[6] and was a member of The Acting Company.[7] While acting in theatrical productions in New York City, he drove a moving van to make ends meet.[8]

Wilson worked extensively in the theater in his early career, performing with the Public Theater, Ensemble Studio Theater, Playwrights Horizons, The Roundabout, and The Guthrie Theater, among others. He was nominated for three Helen Hayes Awards for Best Supporting Actor for his work at the Arena Stage.

Wilson first appeared onscreen in 1997 in an episode of the soap opera One Life to Live, followed by a supporting part in the television film The Expendables (2000).[9]

Wilson made his feature film debut in Galaxy Quest (1999), followed by a minor supporting role in Cameron Crowe's Almost Famous (2000). In 2002, he was cast in a lead role in Rob Zombie's horror film House of 1000 Corpses (2003).[10] Beginning in 2003, Wilson played Arthur Martin, the intern at Fisher & Diaz Funeral Home in HBO's Six Feet Under, earning a Screen Actors Guild award for best drama ensemble for the series. He also had minor roles in America's Sweethearts (2001), and the Melvin van Peebles biopic Baadasssss! (2003).

Wilson at the Heroes for Autism event, Hollywood, California

In 2005, Wilson appeared in the comedy film Sahara,[12] as well as the independent mockumentary film The Life Coach.

The same year, Wilson was cast as Dwight Schrute, a neurotic office worker in the network series The Office.[13] He was nominated for an Emmy for Best Supporting Actor in 2007, 2008, and 2009. He won two SAG awards for best comedy ensemble on the series. In addition to acting on the series, Wilson also directed three episodes: season 6's "The Cover-Up", season 7's "Classy Christmas", and season 8's "Get the Girl".

On February 24, 2007, Wilson hosted Saturday Night Live, becoming the second cast member from The Office to host (after Steve Carell). During the 2007 FIFA Women's World Cup, Wilson appeared in ads for the 2007 United States women's national soccer team as public relations manager "Jim Mike". In August 2010, Wilson appeared in the music video for Ferraby Lionheart's "Harry and Bess" and Andy Grammer's "Keep Your Head Up" as the "creepy elevator guy".

Wilson starred in the Fox Atomic comedy The Rocker, released on August 20, 2008.[14] In 2009 he lent his voice to DreamWorks Animation film Monsters vs. Aliens, as the villainous alien overlord Gallaxhar,[15] and was featured in Transformers: Revenge of the Fallen, in which he played a university professor. In 2010, he played the lead role as the unhinged protagonist in Super. In his review of the film, critic Roger Ebert praised Wilson's performance, writing: " never seems to be trying to be funny, and that's a strength," though he faulted the script's material.[16]

For his role of Paul, the bereft father, in Hesher (2011), Roger Ebert said of Rainn in his review: “He has that rare quality in an actor, an uncanny presence. There are a few like him (Jack Nicholson, Christopher Walken, Bill Murray) who need only to look at something to establish an attitude toward it. Yes, they can get worked up, they can operate on high, but their passive essence is the point: dubious, wise, sadly knowledgable, at an angle to the throughline. Other actors could sit on a sofa and watch TV, but Rainn Wilson makes it a statement. A statement of … nothing, which is the point."[17]

In the Fox crime-drama Backstrom, Wilson played Evert Backstrom, an offensive, self-destructive detective who is part of a team of eccentric criminologists. The series is based on Leif G. W. Persson's Swedish book series of the same name.[19] Wilson also served as the show's producer. It was cancelled by Fox after 13 episodes.[20] In 2016, he appeared in television as a guest star on Roadies.

In 2017, Wilson voiced the character of Gargamel in the 2017 animated reboot of The Smurfs: The Lost Village for Sony Pictures Animation.[21] He also starred in the independent comedy film Permanent as loving and funny father Jim Dickson alongside Patricia Arquette and Kira McLean. The film was directed by Colette Burson and produced by 2929 Entertainment.[22] Wilson starred in Shimmer Lake (2017) for Netflix and The Meg (2018) for Warner Brothers.[23]

Wilson founded the website and YouTube channel SoulPancake. The website was originally coded by the company ThinkBrilliant, led by Aviv Hadar.[25] Wilson and Hadar fell into a dispute which led to two years of litigation, which was resolved in December 2011 with a settlement and a statement by Wilson putting the matter to rest.[26][27] As of November 21, 2017 the channel has over 2.3 million subscribers, and over 225 million video views. SoulPancake has been featured on Oprah Winfrey's Satellite Radio Show and Super Soul Sunday.[28] The tagline of the brand is: "We make stuff that matters." They were named one of Fast Company's 10 Most Innovative Companies in Video for 2015. More recently, SoulPancake was ranked #114 on the 2015 Inc. 500 Fastest-Growing Private Companies in America List.[29] In October 2016, it was purchased by Participant Media.[30]

He co-wrote the New York Times Bestseller SoulPancake: Chew on Life's Big Questions and wrote a humorous memoir about his personal life, career and faith called The Bassoon King that was published in November 2015.[31]

Wilson is married to writer Holiday Reinhorn. The couple met in an acting class at the University of Washington; Reinhorn had relocated to Seattle to attend the university from her native Portland, Oregon.[1] The couple married on the Kalama River in Washington in 1995, and have a son, Walter McKenzie Wilson, born in 2004. They have a home outside of Sisters, Oregon and a house in Los Angeles. They have three pit bulls, Oona, Pilot, and Diamond;[32] two Vietnamese pot-bellied pigs, Snorty and Amy; as well as a zonkey named Derek.[33] He and his family are members of the Baha'i Faith.[34][35][36] He hosts a podcast for the Baha'i blog called the Baha'i Blogcast, where he interviews notable people about the intersection of their faith and their work.[37]

On Bill Maher's Real Time, Wilson described himself as a diverse independent, voting for Republican, Green Party, and Democratic candidates.

Wilson's charitable works include fundraising for the Mona Foundation, a charity operating in developing countries.[38] In 2013, along with Dr Kathryn Adams, he co-founded Lidè Haiti, an educational initiative that uses the arts and literacy to empower adolescent girls in rural Haiti. They currently work in 13 locations with over 500 girls, providing scholarships to many of them.[39]