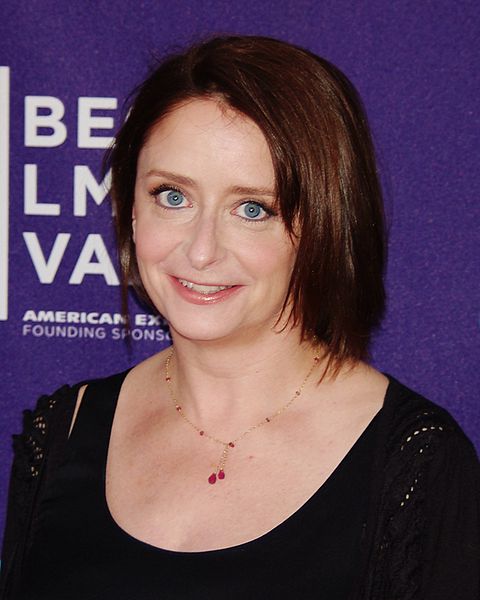 Rachel Susan Dratch (born February 22, 1966) is an American actress, comedian, producer, and writer. Born and raised in Lexington, Massachusetts, she graduated from Dartmouth College in 1988 and moved to Chicago, Illinois, to study improvisational theatre at The Second City and ImprovOlympic.

Her breakthrough came on the NBC television show Saturday Night Live (SNL), where she was a cast member from 1999 to 2006. In addition to her work on SNL, she has appeared as a guest star in television shows such as The King of Queens and 30 Rock, as well as films such as Click and I Now Pronounce You Chuck and Larry. In 2012, she published her autobiographical book Girl Walks Into a Bar: Comedy Calamities, Dating Disasters and a Midlife Miracle. She also portrayed the museum guard in Sesame Street's The Cookie Thief.

Dratch was born in Lexington, Massachusetts,[1] the daughter of Elaine Ruth (née Soloway), a transportation director, and Paul Dratch, a radiologist.[2][3]

Her younger brother, Daniel, is a television producer and writer, with credits including the TV series Anger Management. Dratch grew up the "class clown type",[1] attending William Diamond Middle School and Lexington High School in Massachusetts. She has said that even in her high school's plays she gravitated towards participating in comedies over dramas.[4]

Dratch attended the National Theater Institute at the Eugene O'Neill Theater Center in the fall of 1986,[5] and graduated from Dartmouth College in 1988, where she majored in drama and psychology and was a member of the improvisational comedy group "Said and Done".[1]

Dratch was a member of the mainstage cast of The Second City comedy troupe for four years. She received the Joseph Jefferson award for Best Actress in a Revue for the two revues in which she performed: Paradigm Lost and Promisekeepers, Losers Weepers. At The Second City, she performed alongside future SNL head writers Adam McKay and Tina Fey, as well as future 30 Rock performer Scott Adsit. The first incarnation of her SNL "Wicked" sketch was performed in The Second City's Paradigm Lost. In addition to acting, Dratch also played the cello onstage. The theater also hosted the first incarnation of Dratch & Fey (her critically praised two-woman show with Tina Fey[6]), which was later performed at the Upright Citizens Brigade Theatre in New York, where it was dubbed "the funniest thing to be found on any New York comedy stage" by Time Out New York.[7]

Dratch has appeared in several movies, including Martin & Orloff, The Hebrew Hammer, Down with Love, Dickie Roberts: Former Child Star, Click, I Now Pronounce You Chuck and Larry, Spring Breakdown, and My Life in Ruins. She also has joined fellow SNL cast members on A.S.S.S.S.C.A.T.: Improv, which aired September 7, 2005, on the Bravo channel. Dratch also made television appearances on NBC's Third Watch and in a recurring role on The King of Queens (playing Denise, the on-off girlfriend of Spence, who worked in a bowling alley). Other television appearances include Monk, Frasier, Wizards of Waverly Place, 30 Rock, Aqua Teen Hunger Force, Inside Amy Schumer, Ugly Betty, and more recently, in season five of The Middle. She also appeared online with comedian Billy Eichner in a spoof of Jay-Z and Alicia Keys's "Empire State of Mind", titled "Forest Hills State of Mind."[8]

Dratch was originally cast in the role of Jenna on 30 Rock, and the original pilot episode features her in the role. It did not test well, and the role was recast. She went on to play a variety of small guest roles in several episodes of the first season, including Barbara Walters, Elizabeth Taylor, a cat trainer, a custodian, a blue monster, and a doctor.[9]

On March 19, 2012, Dratch's memoir, Girl Walks Into A Bar: Comedy Calamities, Dating Disasters, and a Midlife Miracle was published. In it, Dratch recounts her experiences after being recast in the 30 Rock pilot, including the birth of her first child.[10]

Her tenure at SNL spanned 1999 to 2006. Dratch's recurring characters included Denise, a Boston teen; Sheldon, the junior-high-school boy from Wake up, Wakefield; one of the Luvahs (with Will Ferrell, as two pretentious professors); Abe Scheinwald, a Hollywood producer with a terrible acquisition record; and, perhaps most memorably, Debbie Downer, a depressed woman who creeped others out with disturbing non sequiturs.[11] In December 2011, she made a guest appearance on Saturday Night Live's Christmas show, hosted by former cast member Jimmy Fallon. On April 15, 2017, she made another guest appearance with host Jimmy Fallon. On February 3, 2018 she made a guest appearance as a "Patriot of New England" in a Revolutionary War-themed sketch parodying the fans of the New England Patriots and Philadelphia Eagles in advance of Super Bowl LII.[12] On September 29, 2018, she appeared as Senator Amy Klobuchar in the cold open sketch surrounding the confirmation hearings of Supreme Court nominee Brett Kavanaugh.[13]

Both of Dratch’s parents were Reform Jews.[14] Dratch attended Hebrew school and had a Bat Mitzvah. She is non-observant as an adult, and instead characterizes the faith she was born into as part of her cultural heritage.[1]

As she discusses in her book, Girl Walks Into a Bar ... , Dratch met John Wahl, a Californian consultant in the natural foods industry, in a bar in 2009. Six months later, Dratch learned she was pregnant, and on August 24, 2010, gave birth to a boy, Eli Benjamin.[15] In an October 2010 interview, Dratch told People that her pregnancy at age 44 shocked her, because she "had bought into all this stuff about, 'Once you're over 40 ...'" and had "gone through the whole process of letting go of " Wahl has since moved to New York City to be closer to Dratch and their son.[16]