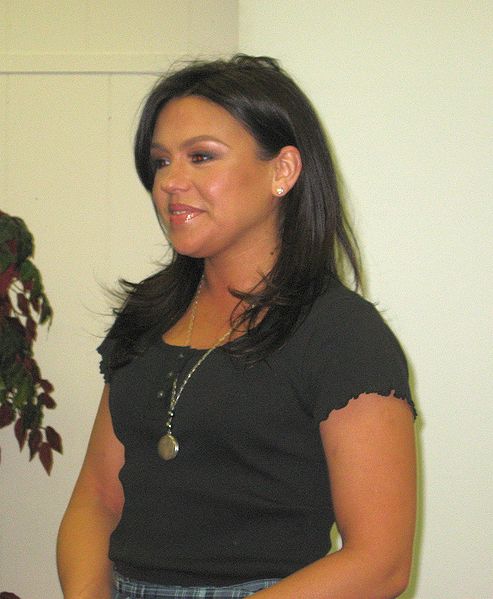 Rachael Domenica Ray was born in Glens Falls, New York, the daughter of Elsa Providenza Scuderi and James Claude Ray.[2] Her mother's ancestry is Italian and her father's is French, Scottish, and Welsh.[3][4][5][6][3]

When Ray was 8, her family moved to Lake George, New York. Her mother managed restaurants in New York's Capital District, including the Lake George Howard Johnson's restaurant, located near the former Gaslight Village amusement park, which attracted many of the entertainers.[5]

In 1995, Ray moved to New York City.[7] She worked first at the Macy's Marketplace candy counter. When Macy's tried to promote her to a buyer in accessories, she moved to Agata & Valentina, a specialty foods store.[8]

Moving back to upstate New York, Ray managed Mister Brown's Pub at The Sagamore, a hotel on Lake George. From there, she became a buyer at Cowan & Lobel, a gourmet market in Albany. Ray credits the concept of 30 Minute Meals to her experience working at the store, where she met people who were reluctant to cook. She taught a course in which she showed how to make meals in less than 30 minutes.[citation needed]

With the success of her "30 Minute Meals" classes, WRGB, the local CBS-TV affiliate, asked her to appear in a weekly segment on their newscasts. This, along with a public radio broadcast and the publication of her first book, led to a Today show spot and her first Food Network contract in 2001.[citation needed]

Ray, who favors a "quick and easy" cooking style, teaches many simple recipes that she says can be completed in 30 minutes or less, although critics claim her concept does not include preparation time.[9]

Ray says her Sicilian maternal grandfather, Emmanuel Scuderi, and her Cajun ancestry both exert strong influences on her cooking. She uses ingredients such as fresh herbs, garlic, and chicken stock to boost flavors, and believes measuring "takes away from the creative, hands-on process of cooking." She, instead, favors approximations such as "half a palmful."

To critics of her shortcut techniques, Ray responds, "I have no formal anything. I'm completely unqualified for any job I've ever had." [7] She has also repeatedly said, "I'm not a chef."[4]

On her television programs, she has used catchphrases such as "E-V-O-O" (extra-virgin olive oil), "yum-o," "G.B." (garbage bowl), "Oh my gravy!", "entréetizer" (entrée-sized appetizer), "stoup" (cross between a soup and stew),[10] and "choup" (thicker than a soup but thinner than a chowder).[11] In 2007, The Oxford American College Dictionary announced the addition of the term EVOO, short for extra-virgin olive oil, which Ray had helped to popularize, and credited her with coining the phrase.[12][13]

One of Ray's specialties is burgers. She has devoted one of her published works, 2012's The Book Of Burger, to the subject.[citation needed]

In 2005, she signed a deal to host a syndicated daytime TV talk show.[14] The show, Rachael Ray, premiered on September 18, 2006. Recurrent appearances on The Oprah Winfrey Show were used to fuel the launch, much as Dr. Phil's show was spun off based on his own frequent visits to Oprah.[15] The show tapes in New York City. In coordination with the syndication announcement, Ray said, "People know me for my love of food, but I have so much more I want to share."[citation needed]

In January 2012, Rachael and Guy Fieri were team captains in the Food Network reality series Rachael vs. Guy: Celebrity Cook-Off.[19]

In 2003, Ray posed for the men's magazine FHM.[7] Though she was not nude in any of the photos, this drew criticism so harsh, not least from Ray's own mother, that in a March 2, 2009 ABC News Nightline interview she gave to Cynthia McFadden, an ABC News correspondent, Ray defended her decision to pose in the magazine.[20] The interview quoted her as saying, "I'd do it again tomorrow."[21]

The Reader's Digest Association launched Ray's magazine Every Day with Rachael Ray on October 25, 2005. The magazine featured seven issues in 2006 and increased to 10 issues in 2007. In October 2011, Meredith Corporation acquired the magazine.[22]

In November 2006, Ray became a spokeswoman for Nabisco crackers. She appears in commercials and on boxes for the many Nabisco products. Many boxes with Ray's picture have her recipes.[citation needed]

In February 2007, WestPoint Home launched sheets, blankets, and coverlets designed by Ray.[23] Within six months, WestPoint expanded Ray's bed and bath line to include the "Moppine," a two-in-one dish towel/oven mitt, as Ray is often seen with a kitchen towel over her shoulder that doubles for her as an ersatz mitt.[24]

In March 2007, the Dunkin' Donuts company announced Ray as its celebrity endorser, mainly of its coffee, since she had denied being able to make coffee herself.[25] As part of a promotional campaign, Ray describes the company's coffee as "fantabulous."[26]

In May 2007, Ray's recipes were made available on AT&T cellular phones via the "Rachael Ray Recipes on the Run" feature.[27]

In July 2008, Rachael Ray's "Nutrish" pet food was introduced. The dog foods are created from recipes Ray developed for her pit bull, "Isaboo". All proceeds from the sale of these products go to Rachael's Rescue, a charity which Ray organized specifically to provide assistance for at-risk animals.[28]

In December 2016, PulteGroup started Rachael Ray Home Collection for their interior design division.[29][better source needed] The furniture it markets is all of Ray's own design.[citation needed]

On September 24, 2005, in Montalcino, Tuscany, Italy, Ray married John Cusimano, an American lawyer and the lead singer of the rock band The Cringe.[citation needed] Cusimano is also a trained mixologist, and wrote a companion volume to his wife's 2012 book My Year in Meals titled, in his case, My Year in Cocktails.

In 2006, Ray launched the Yum-O! nonprofit organization. Its mission is to “empower kids and their families to develop healthy relationships with food and cooking." This is achieved by teaching families to cook, feeding hungry kids, and funding cooking education.”[32][33]