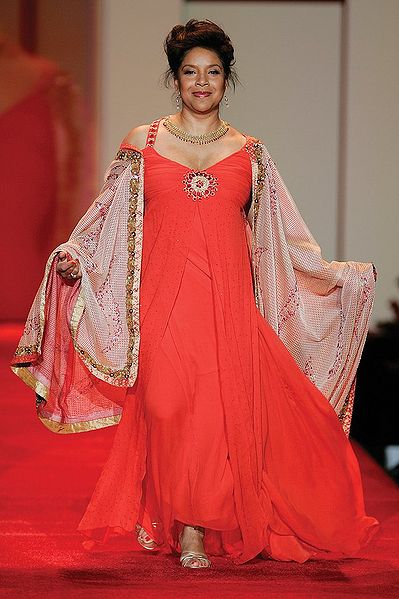 Phylicia Rashād (/fɪˈliːʃə rəˈʃɑːd/ fih-LEE-shə rə-SHAHD) (née Ayers-Allen; June 19, 1948) is an American actress, singer and stage director. She is known for her role as Clair Huxtable on the long-running NBC sitcom The Cosby Show (1984-92), which earned her Emmy Award nominations in 1985 and 1986. She was dubbed "The Mother" of the black community at the 2010 NAACP Image Awards.

Rashad first became known for her stage work with a string of Broadway credits, including Deena Jones in Dreamgirls (she was Sheryl Lee Ralph's understudy until leaving the show in 1982 after being passed over as Ralph's full-time replacement) and playing a Munchkin in The Wiz for three and a half years. In 1978, she released the album Josephine Superstar, a disco concept album telling the life story of Josephine Baker. The album was mainly written and produced by Jacques Morali and Rashad's second husband Victor Willis, original lead singer and lyricist of the Village People. She met Willis while they were both cast in The Wiz.

Other Broadway credits include August: Osage County,[6] Cat on a Hot Tin Roof, Gem of the Ocean, Raisin in the Sun (2004 Tony Award for Best Actress in a Play/Drama Desk Award), Blue, Jelly's Last Jam, Into the Woods, and Ain't Supposed to Die a Natural Death. Off-Broadway credits include Lincoln Center’s productions of Cymbeline and Bernarda Alba; Helen, The Story and Everybody's Ruby at the Public Theater; The Negro Ensemble Company productions of Puppet Play, Zooman and the Sign, Sons and Fathers of Sons, In an Upstate Motel, Weep Not For Me, and The Great Mac Daddy; Lincoln Center's production of Ed Bullins' The Duplex; and The Sirens at the Manhattan Theatre Club. In regional theatre, she performed as Euripides' Medea and in Blues for an Alabama Sky at the Alliance Theatre in Atlanta, Georgia. Other regional theatres at which she has performed are the Arena Stage in Washington, D.C. and the Huntington Theatre in Boston.

Rashad was the first black actress of any nationality to win the Best Actress (Play) Tony Award, which she won for her 2004 performance as Lena Younger in a revival of the play A Raisin in the Sun by playwright Lorraine Hansberry. She was nominated for the same award the following year, for Gem of the Ocean. Several Black women have won in the Best Actress (Musical) category, including the late Virginia Capers, who won in 1973 for her portrayal of Lena in the musical adaptation of Hansberry's play, entitled Raisin. Rashad also won the 2004 Drama Desk award for Best Actress in a Play for A Raisin in the Sun by tying (split award) with Viola Davis for the play Intimate Apparel.

In 2007, Rashad made her directorial debut with the Seattle Repertory Theatre's production of August Wilson’s Gem of the Ocean.[7] More recently, in early 2014 Rashad directed a revival of Fences, also by Wilson, at the McCarter Theatre in Princeton, New Jersey, which ran to generally positive reviews, and continued an ongoing focus on Wilson's work, including a well-received production of Ma Rainey's Black Bottom that she directed at the Mark Taper Forum in Los Angeles in late 2016.[8]

In 2008, Rashad starred on Broadway as Big Mama in an all African-American production of Tennessee Williams's Pulitzer Prize-winning drama Cat on a Hot Tin Roof directed by her sister Debbie Allen. She appeared alongside stage veterans James Earl Jones (Big Daddy) and Anika Noni Rose (Maggie), as well as film actor Terence Howard, who made his Broadway debut as Brick. In 2009, she appeared as Violet Weston, the drug-addicted matriarch of Tracy Lett's award-winning play August: Osage County at the Music Box Theatre.

From March 17 to May 1, 2016, Rashad played the lead role of Shelah in Tarell Alvin McCraney's play Head of Passes at The Public Theater. Her performance was positively reviewed.[9]

Rashad received a career boost when she joined the cast of the ABC soap opera One Life to Live to play publicist Courtney Wright in 1983. She is best known for the role of attorney Clair Huxtable on the NBC sitcom The Cosby Show. The show, which ran from 1984 to 1992, starred Bill Cosby as obstetrician Heathcliff "Cliff" Huxtable, and focused on their life with their five children. In 1985, Rashad co-hosted the NBC telecast of the Macy's Thanksgiving Day Parade with Pat Sajak and Bert Convy.

When Cosby returned to TV comedy in 1996 with CBS's Cosby, he called Rashad to play Ruth Lucas, his character's wife. The pilot episode had been shot with Telma Hopkins, but Cosby then fired the executive producer and replaced Hopkins with Rashad.[10] The sitcom ran from 1996 to 2000.[11] That year, Cosby asked Rashad to work on his animated television series Little Bill, in which the actress voiced Bill's mother, Brenda, until the show's end in 2004. She also played a role in the pre-show of the Dinosaur ride at Walt Disney World's Animal Kingdom theme park as Dr. Helen Marsh, the head of the Dino Institute.[12]

Rashad played "Kill Moves" wealthy mother on Everybody Hates Chris on December 9, 2007. In 2007 she appeared as Winnie Guster in the Psych episode Gus's Dad May Have Killed an Old Guy. She returned to the role in 2008, in the episode Christmas Joy.[13]

In February 2008, Rashad portrayed Lena Younger in the television film adaptation of A Raisin in the Sun, directed by Kenny Leon. Starring core members of the cast of the 2004 Broadway revival at the Royale Theatre of Lorraine Hansberry's 1959 play, including Audra McDonald as Ruth Younger, and Sean Combs as Walter Lee Younger. The television film adaption debuted at the 2008 Sundance Film Festival and was broadcast by ABC on February 25, 2008.[14] According to Nielsen Media Research, the program was watched by 12.7 million viewers and ranked #9 in the ratings for the week ending March 2, 2008.[15]

In November 2010, Rashad featured as Gilda in the ensemble cast in the Tyler Perry film For Colored Girls, based on the play For Colored Girls Who Have Considered Suicide When the Rainbow Is Enuf by Ntozake Shange. Rashad explained in an interview with Vibe Movies & TV in 2010, that "I saw the original Broadway play. I thought it was amazing how such a story that wasn’t pretty was poetry. Usually poetry is about lofty things and this was the poetry of speech and the movement of everyday people. I found a little bit of it off-putting to tell you the truth, because it was so angry when I saw it. And I think Tyler Perry has added an element here that wasn't in the original stage production, and that is the necessity for taking responsibility for one's own self otherwise you are just living to die. That is where he wrote the line, "You gotta take some responsibility in this. Otherwise you are just living to die".[16]

In 2012, she starred in another Tyler Perry movie Good Deeds.[17] Also in 2012, Rashad played Clairee Belcher in the remake of Steel Magnolias (the role originated by Olympia Dukakis). This version has an all African American A-list cast, including Queen Latifah as M'Lynn, Jill Scott as Truvy, Condola Rashād as Shelby, Adepero Oduye as Annelle, and Alfre Woodard as Ouiser.[18]

In 2016, Rashad was cast as a recurring guest star in the role of Diana DuBois in the third season of the Lee Daniels-produced Empire television series on Fox.[19]

In 2017, Rashad portrayed Bishop Yvette A. Flunder, pastor of The City of Refuge Church in San Francisco, CA, as past of the Dustin Lance Black mini-series When We Rise. Her appearance in show highlighted the compassion of the church, the commitment of its leadership and the loving home the church provides to minister in the tough, primarily African-American community in San Francisco.[20]

Rashad's first marriage, in 1972, was to dentist William Lancelot Bowles, Jr. They had one son, William Lancelot Bowles III, who was born the following year. The marriage ended in 1975. Rashad then married Victor Willis (original lead singer of the Village People, whom she met during the run of The Wiz) in 1978. Their divorce was finalized in 1982.

She married former NFL wide receiver and sportscaster Ahmad Rashād on December 14, 1985. It was a third marriage for both of them and she took his last name. They were married after he proposed to her during a pregame show for a nationally televised Thanksgiving Day football game between the New York Jets and the Detroit Lions on November 28, 1985.[21][22] Their daughter, Condola Phyleia Rashād,[23] was born on December 11, 1986 in New York. The couple divorced in early 2001.[24]

Report a problem
Write to Phylicia Rashad at FanPal • 2021