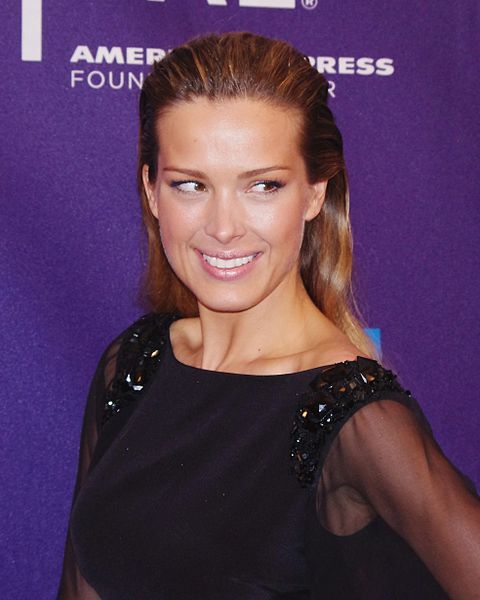 Němcová was born in Karviná,[2] then Czechoslovakia, now the Czech Republic, and grew up in Karviná in the Moravian-Silesian Region with her sister Olga.
Read more...

Scouted on the streets of Prague by NEXT Model Management, upon signing she moved to Milan, Italy. After winning the 1995 Czech Elite Model Look, she returned to Milan where her career flourished.

Němcová gained attention outside the fashion industry after featuring on the cover of the 2003 Sports Illustrated Swimsuit Issue, from a shoot in Barbados by Walter Iooss. She also appeared in the 2002, 2003, 2004, 2005 and 2006 editions.[2] She was the object/subject of Joanne Gair's body painting work.[3] In January 2015 Němcová replaced Abbey Clancy as the face of Ultimo underwear.[4] She also serves as the global face of Chopard.

In 2001, Němcová appeared on British television series Absolutely Fabulous.[5] On 3 June 2004, she was one of the telecast judges during the 53rd annual Miss Universe competition in Quito, Ecuador. In 2007, she was the host of TLC's A Model Life. On 7 July 2007, she was a presenter at the American leg of Live Earth.[2] Němcová was a contestant on season 12 of Dancing with the Stars with dance partner Dmitry Chaplin, reaching the 4th week before being eliminated.[6][7]

Němcová is multilingual and speaks Czech, Slovak, Polish, English, French, and Italian. She was briefly engaged to English actor Jamie Belman.[8][9] In May 2014, Němcová told People that she is dating the former Prime Minister of Haiti, Laurent Lamothe.[10] but as of 2015 they are no longer together.[11]

On 26 December 2004, Němcová was in Khao Lak, Thailand, with her main photographer and fiancé Simon Atlee when the 2004 Indian Ocean earthquake and subsequent tsunami struck.[12] Atlee drowned and Němcová suffered a broken pelvis and serious internal injuries, but she managed to hold on to a palm tree for eight hours until she was rescued by Thai civilians and airlifted to an inland hospital nearby.[13]

Němcová currently serves on the advisory board of the acclaimed Glamour’s Women of the Year Fund.

Her autobiography Love Always, Petra, was released in 2005 from which 100% of the proceeds were donated towards helping children affected both by the 2004 tsunami in Thailand and ongoing natural disasters worldwide.[16]

In 2005, Němcová founded the Happy Hearts Fund (HHF), a charitable organization and campaign formed after the tsunami of 2004.[17] The main mission of Happy Hearts Fund has been to rebuild and renew schools affected by natural disasters. As a result of programmes run by the Happy Hearts Fund, 176 schools have been rebuilt world-wide in 10 countries including Thailand, Indonesia, Haiti, Nepal, Peru, Mexico and The Philippines. Němcová has been heavily involved on an every day basis since establishing the Happy Hearts Fund, helping to establish long term strategies, as well as outlining the vision which has led to the organisations long term success. Her personal experience during the 2004 Boxing Day Tsunami gave her a deep understanding of the power of Mother Nature, allowing her to connect with those in need, bolstering the success of her work through the organisation. In late 2017, the Happy Hearts Fund merged with fellow non-profit organisation All Hands Volunteers to create All Hands And Hearts - Smart Response. As a result, Němcová now acts as co-founder and vice chair of All Hands And Hearts alongside All Hands Volunteers founder David Campbell.[18]

All Hands And Hearts - Smart Response

Němcová currently acts as co-founder and vice chair of All Hands And Hearts - Smart Response (AHAH).

All Hands And Hearts - Smart Response is a non-profit organisation dedicated to providing fast and effective support to communities hit by natural disasters worldwide. Amongst the first to respond and often to last to leave, All Hands And Hearts have helped to rebuild schools and homes across the globe, positively impacting over 105,000 children in disaster hit areas. [19] The mission which Němcová outlined through the Happy Hearts Fund continues to be fulfilled by an international team of dedicated volunteers, to date numbering over 50,000, working in over 18 separate countries. Němcová herself has spoken about the importance of connecting with and understanding the needs of those in need of hope, empowerment and immediate aid, stating that, "We cannot control nature, but we can control that actions that we take."[20]

As of June 2018, All Hands And Hearts has positively impacted over 1 million individuals affected by natural disasters, helping to rebuild 208 schools and hundreds of homes in over 95 different locations, spread across 18 individual countries. [21] To date, 97 programmes have been launched in countries including Nepal, Peru, Mexico, Japan, Indonesia and the United States.

In June 2012, she was designated by president of Haiti Michel Martelly and Prime Minister Laurent Lamothe as Ambassador-at-Large for Haiti for her work with Happy Hearts Fund.[22]

In 2017, Petra was appointed by the UNISDR as a Disaster Risk Reduction Champion and Tsunami Awareness Advocate.[23]