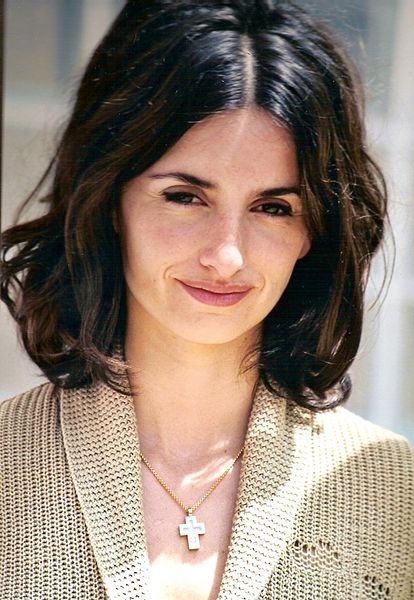 She has since appeared in films in a range of genres, including the comedy Waking Up in Reno (2002), the thriller Gothika (2003), the Christmas film Noel (2004), the action-adventure films Sahara (2005) and Pirates of the Caribbean: On Stranger Tides (2011), the romantic comedy To Rome with Love (2012), the crime drama The Counselor (2013) and the mystery film Murder on the Orient Express (2017). She was praised for her roles in Volver (2006) and Nine (2009), receiving Golden Globe and Academy Award nominations for each. She won the Academy Award for Best Supporting Actress in 2008 for playing volatile painter María Elena in Woody Allen's Vicky Cristina Barcelona. She was the first Spanish actress in history to receive an Academy Award and the first Spanish actress to receive a star on the Hollywood Walk of Fame.[2][3] In 2018, Cruz made her American television debut as Italian fashion designer Donatella Versace in the FX series The Assassination of Gianni Versace: American Crime Story and received a Primetime Emmy Award nomination for her role.

Cruz has modelled for Mango, Ralph Lauren and L'Oréal, and along with her younger sister Mónica Cruz has designed clothing for Mango. Cruz has volunteered in Uganda and India, where she spent one week working with Mother Teresa; she donated her salary from The Hi-Lo Country to help fund the late nun's mission.

Cruz was born in the working-class town of Alcobendas, Madrid, Spain, to Encarna Sánchez, a hairdresser and personal manager, and Eduardo Cruz, a retailer and car mechanic. She has two siblings, Mónica, also an actress, and Eduardo, a singer. She also has a paternal sister, Salma.[4][5][6][7] She was raised as a Roman Catholic.[8] Cruz grew up in Alcobendas, and spent long hours at her grandmother's apartment.[7][9] She says she had a happy childhood.[7] Cruz remembers "playing with some friends and being aware that I was acting as I was playing with them. I would think of a character and pretend to be someone else."[10]

Initially, Cruz focused on dance,[7] having studied classical ballet for nine years[9] at Spain's National Conservatory.[11] She took three years of Spanish ballet training and four years of theatre at Cristina Rota's school.[12][13] She says that ballet instilled in her discipline that would be important in her future acting career.[14] When she became a cinephile at 10 or 11, her father bought a Betamax machine, which was then a very rare thing to own in her neighborhood.[10]

As a teenager, Cruz became interested in acting after seeing the film Tie Me Up! Tie Me Down! (1990) by Spanish director Pedro Almodóvar.[7][15] She did casting calls for an agent but was rejected multiple times because the agent felt that she was too young.[7][16] Cruz commented on the experience, "I was very extroverted as a kid.... I was studying when I was in high school at night, I was in ballet and I was doing castings. I looked for an agent and she sent me away three times because I was a little girl but I kept coming back. I'm still with her after all these years."[16] In 1989, at the age of 15, Cruz won an audition at a talent agency over more than 300 other girls.[11] In 1999, Katrina Bayonas, Cruz's agent, commented, "She was absolutely magic . It was obvious there was something very impressive about this kid.... She was very green, but there was a presence. There was just something coming from within."[11]

In 1989, 15-year-old Cruz made her acting debut in a music video for the Spanish pop group Mecano's song "La Fuerza del Destino". Between 1990 and 1991, she hosted the Spanish TV channel Telecinco's talk show La Quinta Marcha, a programme that was hosted by teenagers, aimed at a teenage audience.[11] She also played in the "Elle et lui" episode of an erotic French TV series called Série rose in 1991, where she appeared nude.[18] In 1992, Cruz made her feature film debut at 18 as the lead female role in the comedy drama art house film, Jamón, jamón.[11] In the film, she portrayed Silvia, a young woman who is expecting her first child with a man whose mother does not approve of the relationship and attempts to sabotage it by paying Javier Bardem's character to seduce her. People magazine noted that after Cruz appeared topless in the film, she became "a major sex symbol".[11] In an interview with the Los Angeles Daily News in 1999, Cruz commented that "it was a great part, but...I wasn't really ready for the nudity. But I have no regrets because I wanted to start working and it changed my life."[11] Charlie Rose of 60 Minutes noted that Cruz "became an overnight sensation as much for her nude scenes as for her talent".[14] When Rose asked Cruz if she was concerned about how she would be perceived after her role in the film, Cruz replied, "I just knew I had to do the complete opposite."[14]

Jamón, jamón received favorable reviews,[19] with Chris Hicks of the Deseret News describing Cruz's portrayal of Silvia as "enchanting".[20] Writing for the Chicago Sun-Times, film critic Roger Ebert wrote "it stars actors of considerable physical appeal, most particularly Penélope Cruz as Silvia".[21] For her performance, Cruz was nominated for a Spanish Actors Union Newcomer Award and a Goya Award for Best Actress. The same year she appeared in the Academy-Award-winning Belle Epoque as the virginal Luz.[11] People magazine noted that Cruz's role as Luz showed that she was versatile.[11] From 1993 to 1996, Cruz appeared in ten Spanish and Italian films.[22] At 20, she went to live in New York for two years at Christopher and Greenwich to study ballet and English between films. She recalls learning English "kind of late", previously knowing only the dialogue she had learned for the casting and the phrases "How are you?" and "Thank you".[10]

Cruz's agent is Hylda Queally, shared with Cate Blanchett and Kate Winslet.[23] In 1997, Cruz appeared in the Spanish comedy film Love Can Seriously Damage Your Health. She portrays Diana, a fan of the Beatles band member John Lennon; she tries unsuccessfully to meet him. Years later, after multiple failed relationships, Diana re-unites with an acquaintance under unusual circumstances.[24] Also in 1997, she appeared in the opening scene of Pedro Almodóvar's Live Flesh as a prostitute who gives birth on a bus[11] and in Et hjørne af paradis (A Corner of Paradise) as Doña Helena. Cruz's final appearance in 1997 was the Amenabar-directed Spanish sci-fi drama, "Abre Los Ojos"/ Open Your Eyes. She plays Sofia, the love interest of Eduardo Noriega's lead character. Open Your Eyes received positive reviews,[25] and was later remade by U.S. director Cameron Crowe as "Vanilla Sky" (who cast Cruz in the same role and Tom Cruise in Noriega's role), but "Open Your Eyes" was not commercially successful.[26] Kevin N. Laforest of the Montreal Film Journal commented in his September 2002 review that Cruz "has been getting some really bad reviews for her recent American work, but I personally think that she's a more than decent actress, especially here, where she's charming, moving and always believable. There's one shot in particular, where Cruz enters a room in a greenish glow, which is right out of Hitchcock's picture ."[27]

In 2006, Cruz became spokesmodel for French cosmetics company L'Oréal to promote products such as the L'Oréal Paris hair dye Natural Match[138] and L'Oreal mascara products.[139] She receives $2 million a year for her work for the company.[11] Cruz has appeared in print ads for Mango[140] and had a contract with Ralph Lauren in 2001.[11][141] Cruz and her sister designed their second collection for Mango in 2007.[16] It was inspired by Brigitte Bardot and summers in St Tropez.[16]

In 2010, Cruz was a guest editor for the French Vogue magazine, focusing on larger-size models in a provocative photo shoot.[146] Almodóvar described her as his muse.[147] On the cover of Spanish Vogue's December 2010 issue, she agreed to be photographed by fashion photographer Peter Lindbergh only if her pregnancy was not shown.[148] In 2011, The Telegraph reported the most sought after body parts of the rich and famous revealed by two Hollywood plastic surgeons who carried out a survey among their patients to build up the picture of the perfect woman. Under the category of the most sought after body shape, Penélope Cruz, known for her voluptuous figure, was voted as having the top body.[149] Men's Health ranked her at No. 32. on their "100 Hottest Women of All-Time" list.[150] Esquire named her the Sexiest Woman Alive in 2014.[151]

During the 2014 Israel-Gaza conflict, Cruz along with her husband signed an open letter, denouncing Israel's actions as a "genocide",[152].

Cruz has donated money and time to charity. In addition to work in Nepal, she has volunteered in Uganda and India, where she spent a week working with Mother Teresa that included assisting in a leprosy clinic.[153] That trip inspired Cruz to help start a foundation to support homeless girls in India, where she sponsors two young women.[153] She donated her salary from her first Hollywood film, The Hi-Lo Country, to Mother Teresa's mission.[141][153] In the early 2000s, she spent time in Nepal photographing Tibetan children for an exhibition attended by the Dalai Lama. She also photographed residents at the Pacific Lodge Boys' Home, most of whom are former gang members and recovering substance abusers.[153] She said: "These kids break my heart. I have to control myself not to cry. Not out of pity, but seeing how tricky life is and how hard it is to make the right choices."[153] A pregnant Cruz showed her support for the battle against AIDS by lighting up the Empire State Building with red lights in New York City on 1 December 2010 on International AIDS Day, as part of (RED)'s new awareness campaign, 'An AIDS Free Generation is Due in 2015,' which aims to eradicate the HIV virus from pregnant mothers to their babies.[148] In 2012, she posed for an ad supporting PETA's anti-fur campaign.[154]

Cruz is married to Spanish actor Javier Bardem. Bardem was her co-star in her first breakthrough role as Silvia in Jamón, Jamón, as well as starring alongside her in Vicky Cristina Barcelona.[155] They were also both in the 2013 film The Counselor. Cruz began dating Bardem in 2007 and they married in early July 2010 in a private ceremony at a friend's home in the Bahamas.[156][157] They have a son born in 2011 in Los Angeles,[156] and a daughter born in 2013.[158] She has become a public advocate of breastfeeding since the birth of her children.[159] Both Cruz and Bardem are the only Spanish actors to win an Academy Award, obtaining Best Supporting Actress and Best Supporting Actor respectively.

Cruz had a three-year relationship with Tom Cruise after they appeared together in Vanilla Sky. It ended in January 2004.[153][160] In April 2003, she filed a lawsuit against the Australian magazine New Idea for defamation over an article about her relationship with Cruise.[161]

Cruz is a friend of Spanish director Pedro Almodóvar, whom she has known for more than two decades and with whom she has worked on films.[147] She is known to friends as Pe.[13][16] Cruz owns a clothing store in Madrid and designed jewelry and handbags with her younger sister for a company in Japan.[9]