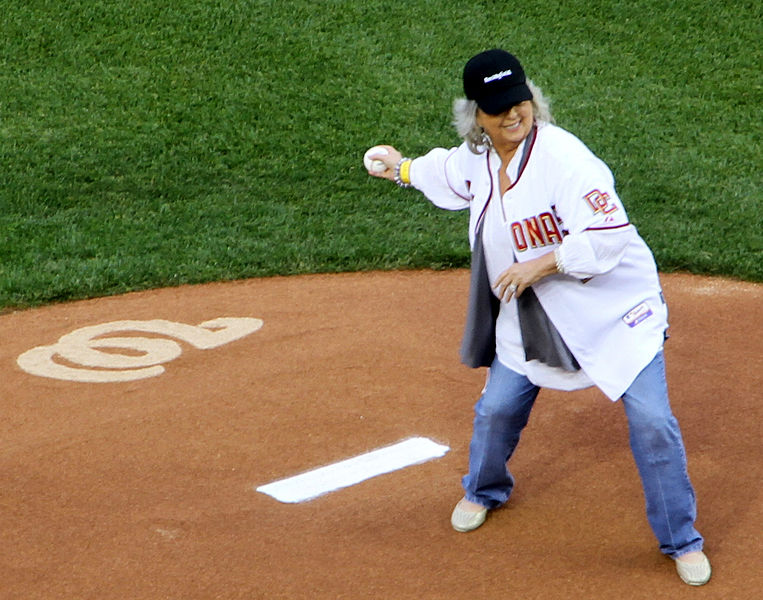 Paula Ann Hiers Deen (born January 19, 1947)[2] is an American celebrity chef and cooking show television host. Deen resides in Savannah, Georgia, where she owns and operates The Lady & Sons restaurant and Paula Deen's Creek House with her sons, Jamie and Bobby Deen. She has published fifteen cookbooks. Though married since 2004 to Michael Groover, she uses the last name Deen, from her first marriage.[3]

Deen was born Paula Ann Hiers in Albany, Georgia,[2] the daughter of Corrie A. Hiers (née Paul) and Earl Wayne Hiers, Sr.[4][5] She grew up Baptist, and is still deeply devoted to her faith.[6] Her parents died before she was 23, and an early marriage ended in divorce. In her 20s, Deen suffered from panic attacks and agoraphobia. She then focused on cooking for her family as something she could do without leaving her house.[7] Her grandmother Irene Paul had taught her the hand-me-down art of Southern cooking;[8] one of the only places she felt safe was at her own stove, making thousands of pots of chicken and dumplings.[9] She later moved to Savannah, Georgia, with her sons. In 1989, she divorced her husband, Jimmy Deen, to whom she had been married since 1965.[10] She was left with only $200[2] and money was tight raising both her kids and her younger brother, Earl ("Bubba"). She tried hanging wallpaper, working as a bank teller, and selling real estate and insurance.[9] She then started a catering service,[11] making sandwiches and meals, which her sons Jamie and Bobby delivered.
Read more...

Deen's home business, The Bag Lady, soon outgrew her kitchen. She first moved into the Best Western on Savannah's southside on Abercorn Street in 1991 with a restaurant called The Lady. In January 1996,[12] Deen opened her restaurant, The Lady & Sons, in downtown Savannah, on West Congress Street. Within a few years, the restaurant moved to the old White Hardware building on Whitaker. USA Today named The Lady & Sons the "International Meal of the Year" in 1999. The specialty is a buffet of Southern "comfort foods".[13] Every buffet meal includes a salad bar and one dessert. Her sons are also involved in managing the restaurant, which is popular with tourists visiting Savannah.[14] Deen owned four casino buffets; they were at Harrah's Casino Tunica in Mississippi, Harrah's Cherokee casino in North Carolina, Horseshoe Southern Indiana, and Harrah's Joliet in Illinois. They were rebranded in 2013 shortly after Deen was removed from the Food Network.[15]

In September 2009, Deen announced a new dessert line to be sold at Walmart including signature pies Apple Crunch Top, Dark Rum Pecan, Old Fashioned Fudge and St. Louis style Gooey Butter Cake bars.[16] In addition to these, Deen co-owned Uncle Bubba's Oyster House in Savannah Georgia. It underwent an "abrupt closure" on April 4, 2014[17] with a spokesperson saying that there were discussions about development of the waterfront property.[18] The property will reopen in June 2017 as Paula Deen’s Creek House and will be a joint venture of Deen and her two sons.[19] On April 27, 2015, Deen opened Paula Deen's Family Kitchen, her new restaurant and retail concept, in Pigeon Forge, Tennessee.[20] On January 25, 2016, the city of Myrtle Beach, South Carolina received an application for a building permit for a two-story Paula Deen's Family Kitchen, to replace the 20-year-old Carlos 'n Charlie's at Broadway at the Beach.[21] In June 2017, Paula Deen opened her Myrtle Beach location. In November 2017, Deen announced that two new Paula Deen restaurants would open in Texas. One location in Dallas is set to open in Spring 2018 and the San Antonio location will open 6-8 weeks later.

In 1997, Deen self-published The Lady & Sons Savannah Country Cookbook and The Lady & Sons, Too! A Whole New Batch of Recipes from Savannah . Both cookbooks featured traditional Southern recipes.[22] She has since published two more, written with Martha Nesbit. Deen has appeared on QVC and on The Oprah Winfrey Show (first in 2002, twice in 2007 and once in 2010). Her life story is featured in Extraordinary Comebacks: 201 Inspiring Stories of Courage, Triumph, and Success (2007, Sourcebooks). In April 2007, Simon & Schuster published Deen's memoir, It Ain't All About the Cookin'. She launched a lifestyle magazine called Cooking with Paula Deen in November 2005,[23] which claimed a circulation of 7.5 million in March 2009.[24] In 2015, Paula Deen Ventures signed a distribution agreement with Hachette Client Services for future cookbooks.[25][26]

Food Network and other television

Deen's relationship with Food Network began in 1999, when her friend Erin Lewis introduced her to Gordon Elliott, who then introduced her to her then agent, Artist's Agency owner Barry Weiner.[27] Elliott took her through the city for a series of Doorknock Dinners episodes. She also appeared on Ready, Set, Cook!. Deen was invited to shoot a pilot named Afternoon Tea in early 2001. The network liked it, and eventually gave Deen her own show, Paula's Home Cooking, which premiered in November 2002. Paula's Home Cooking was originally taped in Millbrook, New York at the home of Gordon Elliott, the show's executive producer.[28][29] Deen mentioned on the March 13, 2006, edition of The Daily Buzz that the next batch of episodes of her show would be taped at her home in Savannah, Georgia. According to the first of those episodes, actual production at her new Savannah home began in November 2005.

Deen throwing out the first pitch before the game between the New York Mets and the Washington Nationals on May 19, 2010, in Washington[30]

On June 21, 2013, due to a controversy regarding Deen's admission, during a deposition for a lawsuit, that she had used racial slurs in a social media post, The Food Network announced they will not renew her contract.[32] It was announced that on September 24, 2014 Paula will unveil her very own network. The network is said to be a full digital experience that lets users access Paula's southern cooking on computer, smartphones and tablets.[33] On March 11, 2015, it was announced that Deen had kicked off her "comeback" with the launch of the all-new Paula Deen Channel on Roku.[34] On September 2, 2015, Deen was announced as one of the celebrities to compete on the 21st season of Dancing with the Stars. She was paired with professional dancer Louis van Amstel.[35] The couple was eliminated in the sixth week of competition, finishing in 9th place overall. In October 2016, Deen launched a syndicated television show, Positively Paula. The Celebrity Chef also appears regularly on the home shopping network, Evine. Deen sells a wide variety of merchandise on Evine including, kitchen appliances, food products, clothing and more.

In 2004, Deen married Michael Groover (born 1956), a tugboat captain in the Port of Savannah, Georgia.[36] Deen has two children from a previous marriage. The wedding was featured in a Food Network show in 2004 and took place at Bethesda Academy in Savannah.[37] On 21 July 2018 Michael Groover won the Hemingway Look-Alike Contest on his ninth try.[38][39]

Paula is a supporter of Bethesda Academy, and asked Old Savannah Tours to donate $1 to the organization for each ticket purchased for the Paula Deen Store ticket sale.[37]

Deen made her film debut in Elizabethtown (2005), starring Orlando Bloom and Kirsten Dunst. She played the aunt of Bloom's character, and her cooking was featured. A Food Network special, Paula Goes Hollywood, aired in conjunction with the film's premiere.[40] In 2015, Deen joined the cast of ABC's Dancing with the Stars. She was eliminated during the sixth week.[41][42]

In June 2007, Deen won a Daytime Emmy Award (Outstanding Lifestyle Host) for Paula's Home Cooking.[43] In October 2010, she was selected as the Grand Marshal of the Tournament of Roses Parade, and presided over the 2011 Rose Parade before the Rose Bowl Game on January 1, 2011.[44]

Deen has faced extensive criticism for the high amounts of fat, salt, and sugar in her recipes.[45] She faced particularly strong objections with the release of Cookbook for the Lunch-Box Set, a cookbook aimed at children, with Barbara Walters saying of the book, "You tell kids to have cheesecake for breakfast. You tell them to have chocolate cake and meatloaf for lunch. And french fries. Doesn't it bother you that you're adding to this?"[46] Celebrity chef Anthony Bourdain commented in 2011 that he "would think twice before telling an already obese nation that it's OK to eat food that is killing us".[47] On January 17, 2012, Deen announced that she had been diagnosed with Type 2 diabetes three years before. It was also disclosed that Deen is a paid spokesperson for the Danish pharmaceutical company Novo Nordisk.[48] She was called a hypocrite for continuing to promote her high-fat and sugar diet while disclosing her medical condition only when it benefited her in representing the drug company to market their diabetes management program.[49]

In June 2013, Deen was the target of a lawsuit alleging racial and sexual discrimination filed by Lisa Jackson.[50] It alleged that Deen made derogatory remarks regarding African Americans in the presence of Jackson, whose nieces are half black.[51] Jackson also alleged that Deen mused about wedding plans for her brother with a "true Southern plantation-style theme" with black male servers but rejected the plans "because the media would be on me about that" (Deen denied having used the "N-word" when discussing the wedding waitstaff).[52] The case was heard in August 2013, with the judge dismissing the suit with prejudice, meaning it cannot be re-filed.[53][54][55] Both sides agreed to dismiss the lawsuit "without any award of costs or fees to any party".[56][57] Deen stated in her deposition that she had used the "N-word" at times.[58][59][60][61][62][63] Specifically, she recalled telling her husband about an incident "when a black man burst into the bank that I was working at and put a gun to my head. ... I didn't feel real favorable towards him."[64] Asked if she had used the word since then, she said: "I'm sure I have, but it's been a very long time maybe in repeating something that was said to me ... probably a conversation between blacks. I don't - I don't know. But that's just not a word that we use as time has gone on. Things have changed since the '60s in the south."[64]

In the time between the filing of the suit and the suit being dismissed, Deen had cookery programs, publishing deals and endorsement contracts cancelled by Food Network,[65] Smithfield Foods,[66] Walmart,[67] Target, QVC,[68] Caesars Entertainment,[15] Novo Nordisk,[69] J.C. Penney,[70] Sears, Kmart[71] and her then-publisher Ballantine Books;[72] however, several companies have expressed their intent to continue their endorsement deals with Deen.[73] During the same time, sales of Deen's cookbooks soared.[74] Former US President Jimmy Carter urged that Deen be forgiven, stating, "I think she has been punished, perhaps overly severely, for her honesty in admitting it and for the use of the word in the distant past. She's apologized profusely."[75]

In July 2015, Deen spewed controversy over a Halloween picture from 2011 where Paula was dressed as Lucy Ricardo played by Lucille Ball while her son Bobby is dressed as Lucy's husband Ricky Ricardo in dark brownface makeup along with Gordon Elliott who was not in his costume as her social media manager who was responsible was fired for it.[76][77] The photo was taken from a holiday-themed episode of her former Food Network show Paula's Best Dishes with a tweet mimicking Arnaz's accented English on the show with[78] "Lucyyyyyyy!, You got a lot of esplanin' to do!", was quickly removed Tuesday from her Twitter account after it drew a flurry of negative comments about Bobby Deen's dark-skinned depiction of the character played by Desi Arnaz Lucille's TV and real-life husband, Arnaz himself was a Cuban-born Hispanic. In a statement, a spokesman for Ms. Deen, Jaret Keller, blames a social media manager for posting the image to Twitter. It was stated that "Paula immediately had this picture taken down as soon as she saw this post and apologizes to all who were offended". Mr. Keller said in this statement "As such, Paula's ventures has terminated their relationship with this social media manager". On Wednesday, Keller declined to identify the fired social media manager.

Report a problem
Write to Paula Deen at FanPal • 2020