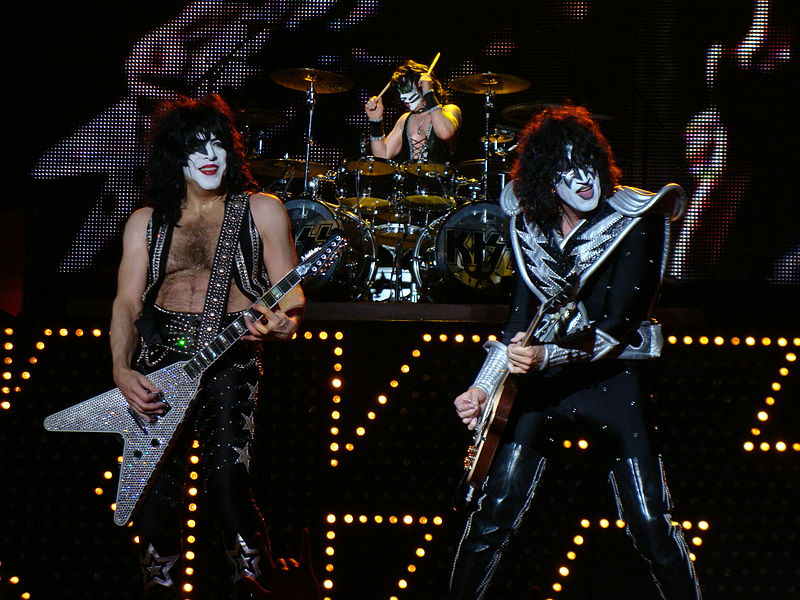 Stanley Bert Eisen (born January 20, 1952), known professionally by his stage name Paul Stanley, is an American musician, singer, songwriter and painter best known for being the rhythm guitarist and singer of the rock band Kiss. He is the writer or co-writer of many of the band's highest-charting hits. Stanley established The Starchild character for his Kiss persona.

Stanley Bert Eisen was born January 20, 1952, in upper Manhattan, near 211th Street and Broadway; the Inwood neighborhood near Inwood Hill Park. Both of his parents are Jewish, he was the second of two children and born two years after his sister Julia. His mother came from a family that fled Nazi Germany to Amsterdam, Netherlands, and then to New York City. His father's parents were from Poland. Stanley was raised Jewish, although he did not consider his family very observant and did not celebrate his bar mitzvah.[1] His parents listened to classical music and light opera; Stanley was greatly moved by Beethoven's works. His right ear was misshaped from a birth defect called microtia; he was unable to hear on that side, thus he found it difficult to determine the direction of a sound, and he could not understand speech in a noisy environment.[2] Attending PS 98, he was taunted by other children for his deformed ear.

Despite his hearing problem, Stanley enjoyed listening to music, and he watched American Bandstand on television. His favorite musical artists included Eddie Cochran, Dion and the Belmonts, Jerry Lee Lewis and Little Richard. Stanley learned to sing harmony with his family, and he was given a child's guitar at age seven.[3][4]

Stanley's family relocated to the Kew Gardens neighborhood in Queens in 1960.[5] He listened to a lot of doo-wop music, but when the Beatles and the Rolling Stones played on U.S. television he was inspired by the performance aspect, which he thought was not out of his reach. Stanley received his first real guitar at age 13, an acoustic one that he would have preferred to be electric. He played tunes by Bob Dylan, the Byrds, the Lovin' Spoonful and more.[3]

All through his childhood Stanley had been recognized for his talent at graphic arts, so he attended the High School of Music & Art in New York City, graduating in 1970.[6] Despite his skill as a graphic artist, he abandoned that as a career, and instead played in bands.

Before Kiss, Stanley was in a local band, Rainbow (not to be confused with Ritchie Blackmore's Rainbow) and was a member of Uncle Joe and Post War Baby Boom. Through a mutual friend of Gene Simmons, Stanley joined Simmons' band Wicked Lester in the early 1970s. The band recorded an album in 1972, but it has not been officially released (although songs from the album appeared on Kiss's 2001 box set). Wicked Lester fell apart and Stanley and Simmons answered Peter Criss's advertisement in Rolling Stone (August 31, 1972): "Expd. Rock & Roll drummer looking for orig. grp. doing soft & hard music." Soon after recruiting Criss, they held auditions for a lead guitarist, with Stanley placing an ad in the Village Voice (December 14, 1972). Despite what Stanley, Criss, and Simmons admit was a shaky first impression, Ace Frehley won the group over with his playing, which all admit was nearly a perfect fit to the group's sound, and with his style, showing up to the audition wearing Converse shoes in two different colors (one red, one orange). Kiss released their self-titled debut album in February 1974.

At this point, Stanley had the idea of changing his name not only for marketing purposes but also the fact he had always hated his birth name. Inspired by Paul McCartney and Paul Rodgers, he legally changed his name to Paul Stanley.[7]

Stanley's persona in Kiss is "The Starchild" displaying one star over his right eye. For a brief time, Stanley changed his character to "The Bandit", with a "Lone Ranger" style mask design make-up pattern. This make-up design was only used during a few mid-1973 shows. "I even tried painting my face all red," he admitted. "I looked like a longhaired tomato! Before settling on the star, I'd just paint a black ring around my eye… Each of us wears something that reflects who we are. I always loved stars and always identified with them - so, when it came time to put something on my face, I knew it would be a star."[8]

In his book Sex Money Kiss, Gene Simmons says Stanley was the driving force for KISS during the period in the 1980s when the band performed without makeup. Those years, Stanley noted, "were fine for me. I found them very satisfying because I got a chance to be out there without makeup, which I craved at that point. I think it was easier for me because my persona was one that wasn't really defined by the makeup… The makeup was just reinforcing what you were seeing and who I was."[9]

In 2006, Stanley resumed[further explanation needed] his association with Washburn Guitars, using the Washburn PS2000. Previously, he has had four signature guitars made by Silvertone, and tweaked the Ibanez Iceman to his specifications, calling it the PS10.

In 2007 (prior to the final show of the Hit 'N Run Tour on July 27), Stanley was hospitalized with tachycardia. In his absence, Kiss performed live as a trio for the first time in decades. The concert was the first Kiss performance Stanley missed.[10]

In September 2007, Stanley took part in Rock 'n Roll Fantasy Camp as a guest star for his second time in New York City.

In 2009 he recorded three voice ads for the charity Kars4Kids. Stanley continues to tour with Kiss; the KISS 2010 The Hottest Show on Earth Tour (a continuation of the Sonic Boom Over Europe Tour, itself a continuation of the Kiss Alive/35 World Tour) which started March 2010 and ended at Guadalajara, Mexico in October.

Stanley has very rarely recorded or performed outside of Kiss. He wrote and recorded material for a solo album in 1987-88, which was shelved in favor of the Kiss compilation, Smashes, Thrashes & Hits. While never officially released, songs such as "Don't Let Go" and "When Two Hearts Collide" have circulated as bootleg recordings. One song from the project, "Time Traveler", was released as part of Kiss' 2001 box set.

Twenty-eight years after releasing his first solo album (as part of the four simultaneously released Kiss solo albums), Stanley released a second album, Live to Win, on October 24, 2006. The title song of his solo album, "Live to Win", appeared on the South Park episode "Make Love, Not Warcraft". In October and November 2006, Stanley embarked on a theater tour in support of Live to Win. His touring band was the house band from the CBS TV show Rock Star, composed of Paul Mirkovich (keyboards), Jim McGorman (guitar), Rafael Moreira (lead guitar), Nate Morton (drums), and Sasha Krivtsov (bass). In April 2007, Stanley extended the tour to include Australia, playing in Coolangatta, Wollongong, Newcastle, Sydney, Melbourne, Perth and Adelaide. Portions of the tour were filmed for a documentary titled Paul Stanley: Live to Dream by the Chicago-based Film Foetus.[11] The band's performance at the House of Blues in Chicago was captured on film and released in 2008 on DVD and digital audio download formats as One Live Kiss.

In 2008, Stanley sang a duet with Sarah Brightman, "I Will Be with You", on her Symphony album. In 2016, he guested in Ace Frehley's covers album Origins, Vol. 1, singing "Fire and Water" by Free.

Stanley tends to sing in the high register of his vocal range. On Music From "The Elder" he experimented with falsetto ("Just a Boy", "The Oath").

Stanley in concert with Kiss at the Chumash Casino Resort in Santa Ynez, California

In 1999, Stanley starred in a Toronto production of The Phantom of the Opera, in which he played the role of the Phantom. He appeared in the musical from May 25 to August 1, and again that year from September 30 to October 31, 1999. Stanley made his debut as a painter in 2006, exhibiting and selling original works of art. Stanley collaborated with Boston-based power pop group Click Five on their hit single, "Angel To You (Devil To Me)". In the past, Stanley has been asked to produce albums for Poison but he was never able to commit due to his work on Kiss projects. However, Stanley did produce a debut album for an up-and-coming band called New England. The first single from that album in 1978 was called "Don't Ever Wanna Lose Ya" and went on to become a Top-40 hit in 1979.[12]

On August 15, 2013, Stanley, Gene Simmons and manager Doc McGhee became a part of the ownership group that created the L.A. Kiss Arena Football League team, which plays their home games at the Honda Center in Anaheim, California.

In 2012, Stanley partnered with Gene Simmons and three other investors to form the restaurant franchise Rock & Brews.

In 2001, Stanley's first wife, actress Pamela Bowen, filed for divorce after nine years of marriage. They have one son, Evan Shane Stanley, born on June 6, 1994. On November 19, 2005, Stanley married longtime girlfriend Erin Sutton at the Ritz-Carlton, Huntington in Pasadena, California. They had their first child, Colin Michael Stanley, on September 6, 2006. The couple had their second child, Sarah Brianna, on January 28, 2009, in Los Angeles.[19] On August 9, 2011, they had their third child, Emily Grace.[20][21]

Stanley has had two hip-replacement surgeries: one after the "Rock the Nation" tour in October 2004, and a second in December 2004 after complications arose from the first surgery. He has announced[when?] that he will require a third hip surgery in the future. He regards the degeneration of his left hip as partly the product of thousands of shows performed in platform boots since the early 1970s.[citation needed]

In October 2011, Stanley had surgery on his vocal cords. He said, "I hold myself to a higher standard than others do. With that in mind, I wanted to remedy a few minor issues that come with 40 years of preaching rock 'n' roll."[22]

Because of his birth defect microtia, Stanley is an ambassador for the charitable organization AboutFace, an organization that provides support and information to people with facial differences. He has appeared at fundraising events and in videos to raise awareness.[23]