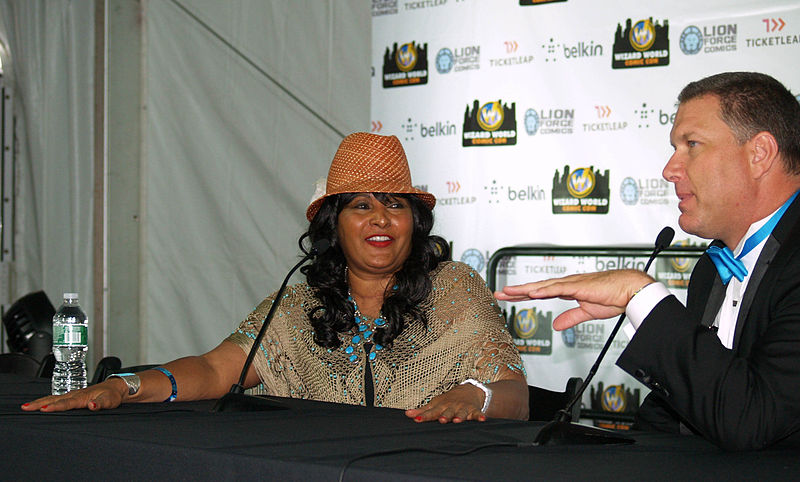 Pamela Suzette Grier (born May 26, 1949) is an American actress. Grier became known in the early 1970s for starring in a string of 1970s women in prison and blaxploitation films such as The Big Bird Cage, Coffy, Foxy Brown, and Sheba, Baby. She starred in Quentin Tarantino's 1997 film Jackie Brown, for which she received a Satellite Award and a Golden Globe nomination for Best Actress. She has also been nominated for a SAG Award.

For six seasons, Grier portrayed Kate "Kit" Porter on the television series The L Word, which ran from 2004. She received an Emmy nomination for her work in the animated program Happily Ever After: Fairy Tales for Every Child. Tarantino said that she may have been cinema's first female action star.[3]

Grier was born on May 26, 1949, in Winston-Salem, North Carolina, the daughter of Gwendolyn Sylvia (née Samuels), a homemaker and nurse, and Clarence Ransom Grier, Jr., who worked as a mechanic and technical sergeant in the United States Air Force. She has one sister and one brother.[4] Grier has stated that she is of mixed ancestry consisting of African-American, Hispanic, Chinese, Filipino, and Cheyenne Indian heritage.[5]

At age 6, Grier was raped by two boys when she was left unattended at her aunt's house. "It took so long to deal with the pain of that," she says, "You try to deal with it, but you never really get over it," she adds. "And not just me; my family endured so much guilt and anger that something like that happened to me."[5] Because of her father's military career, her family moved frequently during her childhood, to various places such as England, and eventually settled in Denver, where she attended East High School. While in Denver, she appeared in a number of stage productions, and participated in beauty contests to raise money for college tuition at Metropolitan State College.

Grier moved to Los Angeles, California, in 1967, where she was initially hired as a receptionist at American International Pictures (AIP).[citation needed] She is believed to have been discovered by director Jack Hill,[citation needed] who cast her in his women-in-prison films The Big Doll House (1971) and The Big Bird Cage (1972). While under contract at AIP, she became a staple of early 1970s blaxploitation movies, playing big, bold, assertive women, beginning with Jack Hill's Coffy (1973), in which she plays a nurse who seeks revenge on drug dealers. Her character was advertised in the trailer as the "baddest one-chick hit-squad that ever hit town!" The film, which was filled with sexual and violent elements typical of the genre, was a box-office hit. Grier is considered to be the first African-American female to headline an action film, as protagonists of previous blaxploitation films were males. In his review of Coffy, critic Roger Ebert praised the film for its believable female lead. He noted that Grier was an actress of "beautiful face and astonishing form" and that she possessed a kind of "physical life" missing from many other attractive actresses.[6] Grier subsequently played similar characters in the AIP films Foxy Brown (1974), Sheba, Baby, and Friday Foster, (both 1975).

With the demise of blaxploitation later in the 1970s, Grier appeared in smaller roles for many years. She acquired progressively larger character roles in the 1980s, including a druggie prostitute in Fort Apache, The Bronx (1981), a witch in Something Wicked this Way Comes (1983), and Steven Seagal's detective partner in Above the Law (1988). She had a recurring role on Miami Vice from 1985 to 1989 and made guest appearances on Martin, Night Court, and The Fresh Prince of Bel Air. She had a recurring role in the TV series Crime Story between 1986 and 1988. Her role in Rocket Gibraltar (1988) was cut due to fears by the film's director, Daniel Petrie, of "repercussions from interracial love scenes".[7] She appeared on Sinbad, Preston Chronicles, The Cosby Show, The Wayans Brothers Show, and Mad TV. In 1994, Grier appeared in Snoop Dogg's video for "Doggy Dogg World".

In the late 1990s, Grier was a cast member of the Showtime series Linc's. She appeared in 1996 in John Carpenter's Escape from L.A. and 1997 with the title role in Quentin Tarantino's Jackie Brown, films that partly paid homage to her 1970s blaxploitation movies. She was nominated for numerous awards for her work in the Tarantino film. Grier appeared on Showtime's The L Word, in which she played Kit Porter. The series ran for six seasons and ended in March 2009. Grier occasionally guest-stars in such television series as Law & Order: Special Victims Unit (where she is a recurring character).

In 2010, Grier began appearing in a recurring role on the hit science-fiction series Smallville as the villain Amanda Waller, also known as White Queen, head agent of Checkmate, a covert operations agency. She appeared as a friend and colleague to Julia Roberts' college professor in 2011's Larry Crowne.

She started the Pam Grier Community Garden and Education Center with the National Multicultural Western Heritage Museum. The purpose is to teach people about organic gardening, health and nutrition among other things.[11]

Grier has never been married and has no children but she has had a few high profile relationships.

Grier met basketball player Kareem Abdul-Jabbar before he became a Muslim. Soon after they began dating, he converted to Islam. Abdul-Jabbar proposed to Grier, but gave her an ultimatum to convert to Islam. He said, "If you don’t commit to me today, I'm getting married at 2 this afternoon. She's a converted Muslim, and she's been prepared for me," adding, "once you become Muslim, you might appreciate another wife." Grier declined, and he got married that day.[12]

Grier met comedian Freddie Prinze while promoting her film Coffy in 1973. They fell in love and considered marriage.[12] Prinze wanted her to have his baby[13] but she did not want to bring a child into the world while he was unstable.[14] Prinze suffered from depression and drug addiction. They remained in touch after she broke up with him. She was one of the last people Prinze spoke to before he fatally shot himself in 1977.[9]

Grier met comedian Richard Pryor through her relationship with Prinze. They did not begin dating until they were both cast in Greased Lightning.[12] She helped Pryor learn to read[9] and wanted to help him with his drug addiction.[13] After six months sober, he relapsed.[12] In her memoir she revealed her sexual relationship with Pryor caused cocaine to enter her system. Her doctor informed her that she had a "buildup of cocaine residue" around her cervix and vagina which he called an "epidemic" in Beverly Hills. He asked if perhaps Pryor put cocaine on his penis to sustain his erection but she was unsure.[15] The doctor then asked her if her mouth went numb while performing oral sex on Pryor, she said it did and he linked it the Novocaine-like effects of cocaine. Grier confronted Pryor about protecting her health, but he refused to use a condom.[14] Pryor later got engaged to another woman while he was dating Grier in 1977.

Grier was diagnosed with stage-four cervical cancer in 1988, and was told she had 18 months to live. Through vigorous treatment she made a recovery and has been in remission.[16]

In 1998, Grier was engaged to music executive Kevin Evans, but the engagement ended in 1999. From 2000 to 2008, she dated marketing executive Peter Hempel.[citation needed]