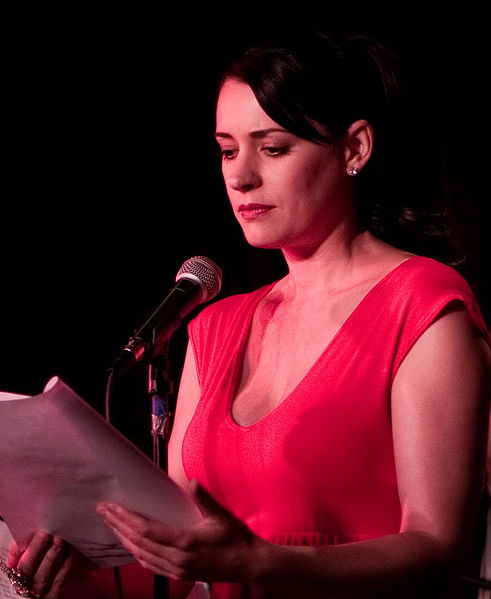 Paget Valerie Brewster (/ˈpædʒɪt ˈbruːstər/;[2] born March 10, 1969) is an American actress, voice actress, and singer. She was first recognized for her recurring role as Kathy on the fourth season of the NBC sitcom Friends. Her breakthrough role came as Special Agent Emily Prentiss on the CBS crime drama Criminal Minds, on which she appeared regularly from 2006 to 2012 and has since returned to for guest appearances before returning regularly in 2016. Her other roles include Elise and Mr. Mumbles on The Hub's Dan Vs., Frankie Dart on Community, Sadie Doyle on the Thrilling Adventure Hour segment "Beyond Belief" and Sara Kingsley on the Fox sitcom Grandfathered. She has also made numerous guest appearances on Two and a Half Men, Law & Order: Special Victims Unit and Modern Family. She stars as Dodo Bellacourt on the Comedy Central series Another Period.

Brewster was born on March 10, 1969, in Concord, Massachusetts.[3] Her mother, Hathaway Brewster (née Tew), worked as a government official, and her father, Galen Brewster, worked as a school administrator.[3][4][5]

Brewster grew up in Massachusetts and moved to New York City to attend Parsons School of Design.[citation needed] During her first year, she made her acting debut and eventually dropped out of design school[citation needed] to pursue her acting career. In the mid 1990s, Brewster moved to San Francisco and enrolled in acting classes. As of 2014[update] she resides in Los Angeles.

Between 1994-1995, Brewster hosted a late-night talk show in the San Francisco Bay Area called Paget for 65 episodes.[6] She first came to prominent attention in her recurring role as "Kathy" in the fourth season of NBC's Friends. She appeared in Andy Richter Controls the Universe and Huff. On film she played Ms. Indestructible, the female lead in James Gunn's low-budget superhero comedy The Specials (2000). She played Amy Pierson, a calculus teacher afraid of the water, in the independent film The Big Bad Swim, which premiered at the 2006 Tribeca Film Festival.

In 2005, she began voice work as Judy Sebben/Birdgirl, a recurring character on the animated series Harvey Birdman, Attorney at Law (and later played a similar guest character on American Dad!).

Brewster had a long run with the show Criminal Minds, playing multilingual Supervisory Special Agent Emily Prentiss until the show's sixth season, when she and A. J. Cook were released from their contracts by CBS in a cost-cutting move. Owing to complaints from fans, both she and Cook were rehired and kept for the following season. In February 2012, Brewster announced via Deadline that she was leaving Criminal Minds at the end of the season to pursue a possible career in comedy television.[7] Brewster reprised her role as Emily Prentiss in season nine for the 200th episode as a special guest star.[8]

Brewster is a regular on The Thrilling Adventure Hour, a staged production in the style of old-time radio that is recorded monthly at Largo in Los Angeles. She plays the recurring character of Sadie Doyle, the alcoholic socialite who can communicate with the supernatural alongside her husband, Frank (Paul F. Tompkins), in the "Beyond Belief" segments. In early April 2013, Brewster appeared in Modern Family as Trish in episode 20, "Flip Flop," playing an art expert who is dating Gloria's ex-husband, Javier. In August 2013, Brewster appeared in episode 106 of the Drunk History television series on Comedy Central. In January 2015 Brewster appeared on Community. In February 2014 it was announced that she had been cast in a new ABC comedy called St. Francis. In August 2016, it was announced that she would be reprising her role as Emily Prentiss on Criminal Minds and would once again be a series regular. Brewster also regularly appears on "Will You Accept This Rose", a Nerdist podcast hosted by Arden Myrin about The Bachelor franchise.

On the March 30, 2006 episode of Late Night with Conan O'Brien, Brewster revealed that she had received a handwritten note indicating Hugh Hefner would like her to pose for Playboy. She seriously considered the offer, but even though she said that she admired Playboy more than magazines such as Maxim and FHM and her parents gave her their blessing, she eventually turned it down.[12] She has volunteered as an actress with the Los Angeles Young Storytellers Program.[13]

On March 17, 2013, Brewster became engaged to Steve Damstra. She made the announcement via Twitter by posting a photograph of the jade engagement ring on her finger.[14][15] Damstra is in the band Folded Light and Whirlwind Heat. Brewster and Damstra were married on November 29, 2014, in Los Angeles, California, in a ceremony officiated by Criminal Minds co-star Matthew Gray Gubler, their best friend.[16][17] They reside in Los Angeles.[1]