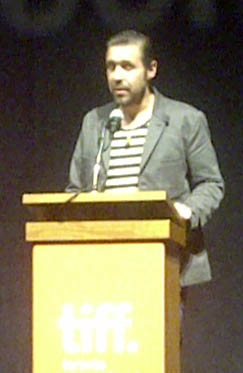 Considine came to prominence in the early 2000s with a string of performances in independent film that prompted The Observer to describe him as "the best-kept secret in British movies".[1] In addition to leading and supporting roles in Hollywood films, he has acted in independent British films and television shows such as The Suspicions of Mr Whicher (2014). He wrote and directed Tyrannosaur (2011), a film based on his directorial debut, the 2007 short film Dog Altogether. He has also acted in and directed several music videos, most notably Coldplay's video for "God Put a Smile upon Your Face" and the Arctic Monkeys video for "Leave Before the Lights Come On".

Considine was born in Burton upon Trent, Staffordshire, where he still resides.[1][3] He grew up with his brother and sisters in a council estate in Winshill, a suburb of Burton.[3][4] Considine attended, among other schools, Abbot Beyne Senior School and Burton College. In 1990, Considine enrolled to do a National Diploma in Performing Arts at Burton College, where he first met Shane Meadows.[1][4] Neither of them completed the course.

In 1994, Considine moved away to study photography at the University of Brighton. While there he studied under the social documentarian Paul Reas, who described one project, portraits of Considine's parents in their house in Winshill, as "fucking brilliant".[3] At one point, Considine was threatened with expulsion, but graduated with a first-class B.A.[1][3]

After graduating from university, Meadows cast Considine in several short films, as well as his second film, A Room for Romeo Brass (1999). Considine, in his screen debut, played the disturbed character Morell.[5] Considine's performance in the film led to Pawel Pawlikowski casting him in his first starring role in Last Resort (2000). Considine played the love-struck misfit Alfie, for which he won the Best Actor award at the Thessaloniki Film Festival.[6] After coming to prominence for his roles as Alfie and Morell, Considine increased his profile during the early to mid-2000s with supporting and starring roles in cult films such as 24 Hour Party People and In America.

In 2004, Considine starred in what was then the most significant role of his career, as Richard in Meadows' revenge film Dead Man's Shoes (2004), a film he co-wrote[2][5] and for which he won the Best British Actor award at the 2005 Empire Awards.[5] In the same year, he starred in My Summer of Love, his second film with director Pawel Pawlikowski. Both films were recognised on the award circuit, where Considine earned five nominations and two wins. The following year, Considine played Frank Thorogood (the suspected murderer of Rolling Stones co-founder Brian Jones) in Stoned (2005). It was around this time that Considine earned his reputation as a popular portrayer of cinema villains, antiheroes, and darker characters. 2005 also saw the release of Considine's second Hollywood film, Cinderella Man.[7]

Considine appeared in the Spanish thriller Bosque de Sombras (2006). It was during the filming of this that Considine penned what later became his debut short, Dog Altogether. Considine claims that it was his co-star Gary Oldman who gave him confidence to make the film, which led to him thanking Oldman during his BAFTA acceptance speech. In 2006, he starred in Pu-239 as Timofey Berezin, a worker at a Russian nuclear facility who gets exposed to a lethal dose of radiation. In 2007, Considine landed roles in two popular big budget films; the third film in the Bourne Trilogy film series, The Bourne Ultimatum, in which he played newspaper reporter Simon Ross,[2] and Hot Fuzz, in which he had his first comedic role as DS Andy Wainwright. In 2008, Considine starred in My Zinc Bed a TV film for BBC / HBO. In 2009, he starred as Peter Hunter in the Channel 4 miniseries Red Riding: 1980, based on the novels by David Peace, and another collaboration with Meadows, Le Donk & Scor-zay-zee, a film which was unscripted, adlibbed, and filmed in five days at a cost of £48,000, and which premiered at the Edinburgh International Film Festival.[4]

In 2011, Considine starred in a film adaptation of Joe Dunthorne's book Submarine, which Richard Ayoade wrote and directed.[8] Also in 2011, Considine appeared as Porter Nash in the adaptation of the Ken Bruen novel Blitz, as well as starring as Jack Whicher in The Suspicions of Mr Whicher, written by Helen Edmundson and Neil McKay. In the same year, Considine was briefly reunited with one of his A Room for Romeo Brass co-stars, BAFTA-winning actress Vicky McClure. The two shared the screen in a television advert to promote "Films for Life Season". The ad was shot over two days in Spain.[9]

Considine has consistently displayed a flair for regional and world accents; along with the Gypsy Midlander Morell in his first role in 1999's A Room for Romeo Brass, Considine played a Londoner in Stoned and The Suspicions of Mr Whicher, a Russian nuclear plant worker in Pu-239, a Welshman in Submarine, Happy Now and Pride, an Irish immigrant in In America, a Mancunian in Red Riding, a Yorkshireman in My Summer of Love, an American in Cry of the Owl and Cinderella Man, and a West Countryman in Hot Fuzz. He has appeared in several music videos, most notably "God Put A Smile Upon Your Face" (2002) by Coldplay and Moloko's "Familiar Feeling" (2003),[6] as well as the Arctic Monkeys track "Leave Before the Lights Come On" (2006), for which he wrote the video.[4]

Considine starred in The World's End, as one of the "Five Musketeers" reattempting an "epic" pub crawl. Considine previously worked with the cast and crew on Hot Fuzz (2007). The film was released in the United Kingdom on 19 July 2013, and the United States on 23 August 2013.[10] In August 2015, Considine confirmed that he was writing the screenplay for the film Journeyman, in which he will also star. It is an adaptation of non-fiction novel The Years of the Locust by Jon Hotten, the true story of a sociopathic boxing promoter, Fat Rick Parker, and his doomed relationship with his naive fighter, Tim Anderson.[11] Considine is also writing a film from a ghost story called The Leaning,[12] with plans to direct both films. He will continue to work with Shane Meadows on King of the Gypsies, a biopic of bare-knuckle fighter Bartley Gorman, whom Considine met and became friends with whilst working as a photographer.[2] In 2015, Considine was announced as having been cast along Glenn Close, Gemma Arterton in the UK zombie film in The Girl with All the Gifts, based on the 2014 novel The Girl with All the Gifts by M. R. Carey.[13]

On 4 October 2015, it was via Considine's official Twitter page that he was about to join the cast of Birmingham-set gangster series Peaky Blinders,[14] seeing him reunited with She Who Brings Gifts director Colm McCarthy.

In April 2017, Considine made his professional stage debut in The Ferryman at the Royal Court Theatre, ahead of a transfer to the Gielgud Theatre in the West End.[15][16][17] It is the fastest selling play in Royal Court Theatre history.

After a short stint in a virtual comedy thrash group called Grunt during college, Considine and Shane Meadows formed the band She Talks To Angels (inspired by the Black Crowes song of the same name) with friends Richard Eaton, Simon Hudson, and Nick Hemming, with Meadows as vocalist and Considine as drummer.[4] Considine left the band, the remaining members re-formed, calling themselves Oslo. Appearing on Jools Holland's show, whilst Considine had moved on to study photography at the University of Brighton, where he formed a new group, a Britpop band called Pedestrians.[11] He is now in a rock band called Riding the Low,[3] who have released an EP 'They Will Rob You of Your Gifts' (2009),[4][18] and an album 'What Happened to the Get To Know Ya?' (2013).

Considine and Riding the Low got their big music break in 2014 after Tim Burgess of the Charlatans invited them to perform at his curated Tim Peaks Diner event at Festival No 6 in Portmeirion, Wales. Considine had contacted Burgess after reading his book Telling Stories, to discuss meditation. "The conversation developed and Tim generously offered to let us play at Portmeirion, It led to the band supporting the Charlatans at the O2 Academy in Leicester this year. I didn't get stage fright. We were ready. We did our history off-camera. We have evolved. We have got better. At first it was raw - all we had was arrogance. We had a long way to go and we learnt our craft at all these pub gigs. We didn't expect a leg-up just because an actor is in the band." said Considine[11]

2016 saw the band release their second full-length album Are Here to Help the Neighbourhood, recorded in Rockfield Studios and produced by Chris Slusarenko. Considine penned the words while the band wrote the music.

In early 2018, Considine confirmed that the long anticipated collaboration with Wigan saxophonist Andrew Teddy Brown would finally be released in February 2019 as a concept album entitled Limping Through Life - an epic tale of the struggle faced by a man with a terminal form of Gout. In November 2018, Considine and Brown confirmed that the debut single from Limping Through Life would be called Days Of Delirium - a song about the extreme highs felt by the album’s central character after taking suppositories to combat Gout.

Considine remains private in his personal life and once stated that if he ever became a celebrity, he'd "disappear and go and make shoes like Daniel Day-Lewis" (a reference to Day-Lewis' sabbatical working as a cobbler in Italy).[19] Considine lives in his home town of Burton upon Trent with his family.[2] Considine's late father was Irish.[20] He has been with his wife Shelley since he was 18 years old.[21]

In April 2011, Considine revealed that he had been diagnosed with Asperger syndrome.[22][23] Although initially reassured by the diagnosis, he continued to struggle in social situations until he was diagnosed in 2013 with Irlen syndrome, a condition in which the brain cannot adequately process visual stimuli. His condition has improved significantly since he began wearing purple Irlen filters.[24]