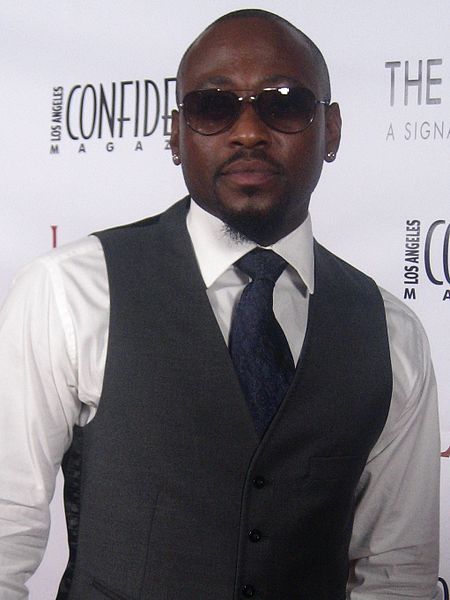 Omar Hashim Epps[1] (born July 20, 1973)[1] is an American actor, rapper, songwriter and record producer. His film roles include Juice, Higher Learning, The Wood, In Too Deep and Love and Basketball. His television work includes the role of Dr. Dennis Gant on the medical drama series ER, J. Martin Bellamy in Resurrection and Dr. Eric Foreman on the Fox medical drama series House from 2004 to 2012.

Epps was born in Brooklyn, New York.[1] His parents divorced during his childhood and he was raised by his mother, Bonnie Maria Epps, an elementary school principal. He lived in several neighborhoods while growing up (Bedford-Stuyvesant, East New York and East Flatbush).[2] Before he started acting, he belonged to a rap group called Wolfpack which he formed with his cousin in 1991. He began writing poetry, short stories and songs at the age of ten and attended the Fiorello H. LaGuardia High School of Music & Art and Performing Arts.[1]
Read more...

Epps at the Paley Center for Media, Beverly Hills, California, on June 17, 2009

Early in Epps's career, he was most often cast in the roles of troubled teens and/or athletes. He made his feature film debut with rapper Tupac Shakur as the star of cinematographer Ernest Dickerson's directorial film debut Juice.

Epps followed up his performance in Juice as a running back in the college football drama The Program alongside James Caan.

Epps starred in the film Deadly Voyage, and won the best actor award at the Monte Carlo Television Festival for portraying Kingsley Ofusu in this true story about African stowaways.

The following year, he switched to baseball as co-star of Major League II, taking over the role of Willie Mays Hayes from originator Wesley Snipes. His next athletic endeavor was playing a track and field star in John Singleton's Higher Learning, a look at the politics and racial tensions of college life.

Epps landed a role on the hit television drama ER for several episodes portraying Dr. Dennis Gant, a troubled surgical intern. After his television work on ER, Epps returned to the big screen in 1997 with a brief turn as a giddy moviegoer on a date with a woman played by Jada Pinkett, who ends up an early victim of a psycho slasher in the blockbuster sequel Scream 2. Also in 1997 Epps was the star of the fact-based HBO movie First Time Felon. He played a small-time criminal who goes through Chicago's boot camp reform system and undertakes a heroic flood rescue, only to then be faced with the adjustment of re-entering society with the mark of ex-con. In 1999 Epps was cast as Linc in The Mod Squad.[3]

While The Mod Squad proved a critical and box-office bust, Epps's later 1999 effort The Wood offered him a serious and multi-dimensional role. Following a group of middle-class African Americans from youth to adulthood, The Wood, the debut effort from director-screenwriter Rick Famuyiwa, co-starred Richard T. Jones and Taye Diggs.[3] Also in 1999, Epps was featured alongside Stanley Tucci and LL Cool J, playing an undercover detective who finds himself caught up in the illegal goings-on he is investigating in In Too Deep. 1999 also saw him lens the 1950s set murder mystery When Willows Touch, with James Earl Jones and Jada Pinkett Smith.[3]

In 2000, Epps starred in Love & Basketball, featuring Alfre Woodard and Sanaa Lathan. He portrayed Quincy, the NBA hopeful who has a stormy relationship with an equally adept female basketball star Monica (Sanaa Lathan). Epps also held supporting roles in a series of films, including Dracula 2000, Big Trouble, and the telepic Conviction. In this year he also had a leading role as a gangster in Brother, a movie by acclaimed Japanese actor/director Takeshi Kitano.

In 2004, Epps landed the role of drug-dealer-turned-prizefighter Luther Shaw, who falls under the tutelage of boxing promoter Jackie Kallen (Meg Ryan) in the biopic Against the Ropes.

Epps was a character in the video game Def Jam Fight for NY in 2004.

Also in 2004, Epps returned to television medical drama with his role as Dr. Eric Foreman on the Fox television series House. The role earned him a NAACP Image Award in 2007, 2008 and 2013 for Outstanding Supporting Actor in a Drama Series. In 2014, Epps took on the role of agent J. Martin Bellamy in the ABC television series, Resurrection. The series focuses on a number of individuals who return from the dead, and change the lives of their families and friends in Arcadia, Missouri.[3]

In 1999 Epps began dating Keisha Spivey Epps from the hip-hop group Total. The couple married in 2005. They have two children, daughter K'mari Mae and son Amir. He also has a daughter, Aiyanna, from a previous relationship.[4] He is fluent in Spanish and French.

Epps and actor/comedian Marlon Wayans were high school classmates at LaGuardia High, both graduating in 1990.[5] Epps co-produced, along with Marlon and Shawn Wayans, the 1997−99 theme song used for the sitcom The Wayans Brothers.[6]