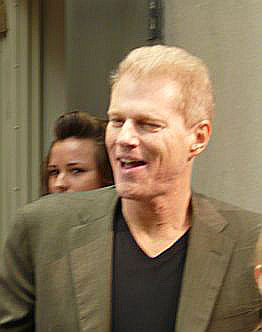 Emmerich was born youngest of three boys on February 27, 1965, in New York City, New York, to a Jewish family.[1][2] His mother, Constance, is a concert pianist; and his father, André Emmerich (1924-2007), was a gallery owner and art dealer who was born in Frankfurt, Germany and left Nazi Germany with his family, relocating first to Amsterdam, Netherlands, and then New York in 1940.[1][3][4] Noah has two brothers: Toby Emmerich, President and Chief Operating Officer at New Line Cinema, as well as a screenwriter; and Adam Emmerich, a partner at the firm of Wachtell, Lipton, Rosen & Katz in New York, specializing in mergers and acquisitions.[5]

Noah Emmerich attended the Dalton School and learned to play the trumpet as a youth.[1] He studied the Meisner technique of acting privately under Ron Stetston, an actor/director who is currently senior member of the acting staff at the Neighborhood Playhouse in New York City. He is a graduate of Yale University, where he majored in History. He sang in the "Yale Spizzwinks(?)" an a cappella singing group;[6] another member performing with him in the group was actor Josh Malina.

Emmerich starred in the film Beautiful Girls,[7] which was his first starring role and earned him positive reviews from audiences and critics. He then went on to have supporting roles in such movies as The Truman Show,[8] Life and Frequency.

In the 2000s, Emmerich began to star in more dramatic films, such as Julie Johnson, Beyond Borders, Little Children,[9] Pride and Glory[10] and many more. He played the main antagonist, Colonel Nelec, in J. J. Abrams's film Super 8,[11] which earned positive reviews from critics and was a box office success.

Most notably, he played as assistant coach Craig Patrick in the 2004 film Miracle.

In 2016 Emmerich portrayed Bill Hammond in the western Jane Got a Gun.[12]

Beginning in the 2000s Emmerich began to portray more prominent guest roles on television series such as Monk, White Collar[13][better source needed] and The Walking Dead,[14] which earned him a Saturn Award nomination.[15]

His most notable role in a television series is as FBI Agent Stan Beeman on the FX series The Americans.[16] The series has earned positive reviews from critics and Emmerich earned a Critic's Choice Award nomination for his performance.[17] The series has been renewed for a sixth and final season.[18] Emmerich made his directorial debut on the season 3 episode of the series, entitled "Walter Taffet".[19] He again directed episode 5 of season four.

Emmerich was married to actress Melissa Fitzgerald from 1998 to 2003. On April 26, 2014, Emmerich married actress and producer Mary Regency Boies at the Gramercy Park Hotel in New York.[20] He lives in Greenwich Village in New York City.

Noah Emmerich is not related to the director Roland Emmerich.