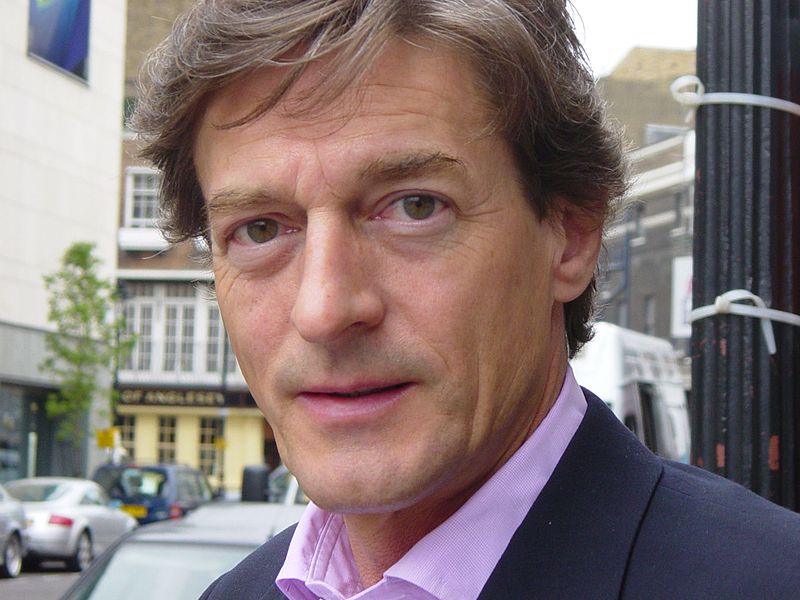 Nigel Allan Havers (born 6 November 1951)[1] is an English actor. He played Lord Andrew Lindsay in the 1981 British film Chariots of Fire, earning a BAFTA nomination for the role and Tom Latimer in the British TV comedy series Don't Wait Up. He portrayed the role of Lewis Archer in Coronation Street from 2009-10. He returned to the role in 2012 and left again in February 2013. He returned again on 1 June 2018.

Havers was born in Edmonton, Middlesex (now part of north London), and is the second son of Sir Michael Havers (later Baron Havers), who was a barrister who became a controversial Attorney General for England and Wales and, briefly, Lord Chancellor in the Conservative Government in the 1980s. His paternal aunt Baroness Butler-Sloss,[2] his grandfather Sir Cecil Havers and elder brother Philip Havers QC also had prominent legal careers. His paternal uncle, David Havers was a Manchester-based businessman.

Havers took part in the BBC TV series Who Do You Think You Are?, broadcast in the UK in July 2013. As part of the show he explored his ancestry from an Essex businessman, on his father's side, and a Cornish miller on his mother's side.[3][4]

Havers was educated at Nowton Court Prep School and the Arts Educational School, an independent school in London, opting against the Eton education traditional to his family (except his father, who was educated at Westminster School), because he thought that fagging "sounded frightful".[5]

Havers is most known for "playing the quintessential, old school Englishman with his dashing good looks, cut-glass accent and thoroughly charming manner".[6] Havers's first acting job was in the radio series Mrs Dale's Diary and he subsequently went on to working for the Prospect Theatre Company initially "carrying a spear and making cups of tea" as he puts it in his autobiography. After this he had a stint working for a Jamie Symonds. Mr Symonds, who was interviewed on Richard and Judy, stated "Nige used to babysit for us back then as well as iron and generally fix things. I loved him greatly as I still do. I miss his fluffy hair and his strong hands". From an early age Havers had an eye for the ladies; Kenneth More, a friend of his father, advised a young Havers that "if you are charming, you don't have to ask them to go to bed, they ask you".[5] He describes his experiences with an early leading lady, Maxine Audley thus: "I was in her dressing room doing whatever she asked me to, and I mean anything and everything. One afternoon I sauntered into her dressing room, still in my officer's kit, only to find a similarly clad new member of the cast rehearsing what I had perfected over the past few months. My time was up. She blew me a kiss and I slid away. Actually, I was rather relieved, I needed a rest."

After his theatre work, Havers slid into a period of acting unemployment, during which time he worked for a wine merchant. He ended this part of his career when his girlfriend, who later became his first wife, Carolyn Cox, suggested they move in together in 1974.

In 1975 Havers's career began to pick up with an appearance in Upstairs, Downstairs, appearing in one of the series' last episodes, "Joke Over" as Peter Dinmont, one of Georgina's (Lesley-Anne Down) Roaring Twenties "party" friends. Dinmont is in the Rolls Royce when Georgina accidentally kills a farmer on a bicycle. Dinmont refuses to testify on Georgina's behalf at a preliminary trial, as he was passed out drunk in the back seat and did not witness the accident.

His first film appearance was a small part in Pope Joan (1972) and he was a character in The Glittering Prizes (1976), but his first major success came with the leading role in a BBC dramatisation of Nicholas Nickleby (1977), closely followed by another BBC drama serial, A Horseman Riding By (1978). By the time he appeared in the film Chariots of Fire (1981), he had become a familiar face on British television. Despite his work in such films as A Passage to India (1984), Empire of the Sun (1987) and Farewell to the King (1989), he never became a film star, but has continued in a succession of starring roles on television. He co-starred for several years in the 1980s BBC sitcom Don't Wait Up (1983-90) alongside Tony Britton. He also starred in The Little Princess (1986) with Maureen Lipman, which won him a dedicated audience. He is also widely recognised in the Lloyds Bank television commercials.

Havers co-starred with Warren Clarke in the 1991 comedic mini-series Sleepers on the BBC. In it, he and Clarke played former KGB spies who had assimilated into English life in the 1960s and were "lost" for 25 years. Successfully and happily living as Englishmen, their worlds are turned upside-down when they discover that the KGB is looking for them. As they resist going back to Russia, the ex-spies lead the KGB, CIA, and MI5 on a madcap chase through England. The following year, Havers was the subject of This Is Your Life, having been surprised by Michael Aspel.

Havers then wrote his autobiography, Playing with Fire, which was published in October 2006. In 2009 he appeared in the U.S. television drama Brothers & Sisters, and the Doctor Who spin-off The Sarah Jane Adventures. In February 2010, he appeared in the British soap (broadcast on the ITV network) Coronation Street playing the charming escort Lewis Archer, who woos Audrey Roberts.

In November 2010 Havers became a contestant on the tenth series of I'm A Celebrity... Get Me Out of Here!, which started on 14 November 2010. A week after the first episode of the series was aired, it emerged on ITV morning show DayBreak, that Nigel Havers had walked from the jungle.[7]

As a guest star in the 2011 Christmas Special episode of the worldwide hit television show Downton Abbey, Havers portrayed Lord Hepworth, a charming and hopeful suitor of wealthy Lady Rosamund Painswick, the widowed sister of the Earl of Grantham played by Samantha Bond. In the episode, Hepworth is discovered having an affair with Lady Rosamund's maid and outed as a "fortune hunter."

In July 2012, Havers presented a programme on ITV called "The Real Chariots of Fire". This was about the runners who inspired the film Chariots of Fire. In 2014, he played Tony Pebble in The Life of Rock with Brian Pern, a BBC Four comedy which parodied the life and career of former Genesis singer Peter Gabriel.[8] On 25 January 2015, Havers took part in celebrity talent show Get Your Act Together.

It was announced in mid-2016 that Havers would play an as-yet untitled character for the ninth series of the sitcom Benidorm. He Played The Character In Series 10 As Well. The Characters Was Named Stanley Keen

In the mid-1980s, Havers began an affair with Polly Williams, the daughter of actor Hugh Williams and the sister of his friend, the actor Simon Williams. He has stated that he had several affairs during his first marriage, which he now regrets.[9] News broke as he was appearing in TV series The Charmer and caused him to be identified with the role in his public persona[citation needed]. Havers has written of the depression he experienced trying to choose between his marriage to Carolyn Cox and their young daughter Kate, born in 1977, and his mistress. During this time, he consulted a psychiatrist at the Devonshire Hospital in London. Things were resolved in his mind when he took on a role in the TV film Naked Under Capricorn, which was filmed in Alice Springs, Australia. He describes in his autobiography wrangling a herd of cattle and catching sight in the distance of a figure who turned out to be Williams. The couple got married in 1989, and the marriage lasted until her death on 24 June 2004. A blessing was held in Saint Tropez the following month.

On 8 June 2007, Havers married Essex native Georgiana "George" Bronfman[10] (née Rita Webb), in New York City. Bronfman is the former spouse of the late Edgar Bronfman, the mother of Sarah and Clare Bronfman, and is known for her charitable work with noted paleontologist Richard Leakey.[11] In 1990, "a brief but tempestuous affair with Lorenzo Ricciardi, an Italian filmmaker in his 60s" had led to him being "arrested in 1990 for trying to kill her."[12]

Havers appeared in BBC One's genealogical show Who Do You Think You Are? in 2013.

He is the godfather of comedian Jack Whitehall.[13]

Havers is a supporter of the British Red Cross.

Report a problem
Write to Nigel Havers at FanPal • 2020