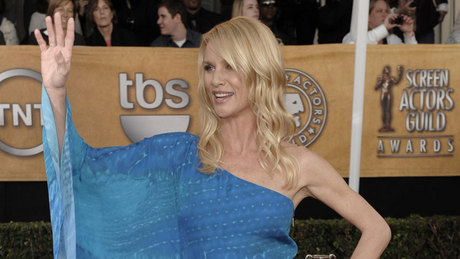 Nicollette Sheridan (born 21 November 1963)[1] is a British-American actress, writer and producer. She began her career as fashion model, before landing a role in the short-lived ABC prime time soap opera Paper Dolls in 1984. The following year, she starred in the romantic comedy film The Sure Thing.

Sheridan is best known for her roles on television. From 1986 to 1993, she played Paige Matheson on the CBS prime time soap opera Knots Landing, for which she won two Soap Opera Digest Awards. She later had leading roles in numerous made-for-television movies and miniseries, including Lucky Chances (1990), Virus (1995), and The People Next Door (1996). She has also made a number of feature film appearances, including roles in Noises Off (1992), Spy Hard (1996), Beverly Hills Ninja (1997), and Code Name: The Cleaner (2007).

In 2004, Sheridan began starring as Edie Britt in the ABC comedy-drama series Desperate Housewives, a role she played until 2009, for which she received a nomination for a Golden Globe Award. In 2018, she began playing Alexis Carrington in The CW prime time soap opera reboot Dynasty.

Sheridan was born in Worthing, Sussex, England, the daughter of actress Sally Adams,[1] who gave birth to her at age 16. When Sheridan was less than a year old her father left the family, and she has never seen him since.[2]

In 1969, her mother Sally (billed as Dani Sheridan) featured in the James Bond film On Her Majesty's Secret Service as one of Blofeld's "Angels of Death". There Sally met Blofeld actor Telly Savalas, who eventually became her de facto husband and Sheridan's stepfather.[2] Sally became known as Sally Savalas.

Nicollette emigrated to the United States from England in 1973, when she was ten years old.[3]

Sheridan began her career as a fashion model, appearing in the pages of Vogue and on the cover of Cosmopolitan, shot by Francesco Scavullo. In 1984, she made her acting debut in the short-lived ABC primetime soap opera Paper Dolls. The series was cancelled after half a season, and the following year, Sheridan starred in the romantic comedy film The Sure Thing. Later that year, she was cast in the pilot for another ABC prime time soap, Dark Mansions, intended to be a cross between Dynasty and Dark Shadows. The project did not go to series, but the pilot episode was aired as a television movie in 1986.[4]

In 1986, Sheridan joined the cast of the CBS prime time soap opera Knots Landing as vixen Paige Matheson.[5] She started in a recurring role, but had become a series regular by the 1988-89 season. Sheridan remained with the series for seven seasons until its end in 1993. For her performance in the role, she won the 1990 Soap Opera Digest Award for Outstanding Lead Actress: Prime Time, and the 1991 Soap Opera Digest Award for Outstanding Heroine: Prime Time. The same year, she was named one of People's "50 Most Beautiful People".[6]

In the 1990s, Sheridan went to star in a number of television movies. In 1990 she starred in Deceptions and played Lucky Santangelo in the television adaptation of Jackie Collins' Lucky Chances. The following years she had star-billed roles in Somebody's Daughter (1992), Time to Heal (1994), Shadows of Desire (1994), Virus (1995), Silver Strand (1995), The People Next Door (1996), Murder in My Mind (1997), Dead Husbands (1998), The Spiral Staircase (2000), Haven't We Met Before? (2002), Deadly Betrayal (2003) and Deadly Visions (2004). Despite her television lead roles, her film career was limited. In 1992, she co-starred opposite Carol Burnett and Michael Caine in the comedy Noises Off, and later had only two studio movies: Spy Hard (1996) opposite Leslie Nielsen, and Beverly Hills Ninja (1997) starring Chris Farley. In 1998, she auditioned for the role of Grace Adler on Will & Grace, though the role ultimately went to Debra Messing.[7] However, Sheridan did make a guest appearance on the show in 2003.

In 2004, Sheridan was cast as Edie Britt in the ABC comedy-drama series Desperate Housewives. The character was originally written as a recurring role in the series. Sheridan had originally auditioned for Bree Van de Kamp, one of the series' more prominent roles.[8] On 15 November 2004, Sheridan (in character as Britt) appeared with NFL wide receiver Terrell Owens in an introductory skit to that evening's Monday Night Football episode.[9] Some observers condemned the skit as sexually suggestive, and ABC later apologized for airing it. On 14 March 2005, the Federal Communications Commission ruled that the skit did not violate decency standards, because it contained no outright nudity or foul language. Sheridan was nominated for a 2005 Golden Globe Award for Best Supporting Actress - Series, Miniseries or Television Film[6] and was ranked #48 on Maxim's 2006 Hot 100 List.[10] In February 2009, during the show's fifth season, Sheridan announced her departure from Desperate Housewives. Her exit episode aired in April 2009 when Edie Britt was killed off.[11][12] Unlike the other main characters who had been killed off over the years on Desperate Housewives, Sheridan did not make an appearance in the show's final episode which aired in May 2012.

In April 2010, Sheridan filed a $20 million lawsuit against Desperate Housewives creator and producer Marc Cherry and ABC Television, alleging that she was assaulted by Cherry on the set of the show and was then fired when she reported the alleged abuse to the network. In her lawsuit, Sheridan claimed wrongful termination, assault and battery, gender violence, discrimination based on sex, sexual orientation and age, and intentional infliction of emotional distress. She also alleged that Cherry was abusive to other cast members and writers. ABC responded by stating that while they were unaware of this particular complaint, they had investigated similar claims made by Sheridan and reportedly found them to be without merit.[13] The show's stars, Teri Hatcher, Felicity Huffman, Marcia Cross and Eva Longoria, pledged their support to help Cherry in his battle against Sheridan's allegations.[14]

In May 2011, a judge granted permission for the case to continue to trial, but threw out Sheridan's claims of harassment.[15][16][17] The case went to trial on 27 February 2012.[18] Cherry asserted that the alleged assault was in fact a tap to the head with his fingers, done in rehearsals when he was demonstrating to Sheridan how she should play a physical gag in a scene. He also stated that the decision to kill off her character was already approved in May 2008 (several months before the alleged hitting incident in September 2008) due, in part, to the need to reduce the show's budget. He also cited Sheridan's unprofessional on-set behavior (such as habitual lateness, not learning her lines, and feuding with her co-stars), and the fact that her character had simply "run its course" as other reasons for the decision.[19] On 13 March 2012, the judge dismissed the battery charge against Cherry due to lack of evidence, and the lawsuit then focused solely on Sheridan's alleged wrongful termination by ABC.[20] Closing arguments were heard on 14 March 2012 and the jury began their deliberations. By 19 March 2012, the jury had failed to reach a verdict and a mistrial was declared. A retrial was scheduled for September 2012, but this was dismissed in August when the Los Angeles Court of Appeal determined that Sheridan had not been wrongfully fired. The court rejected Sheridan's argument that ABC's decision not to renew her option for another season was analogous to a violation of at-will employment. The court reasoned that unlike an at-will employee whose contract could remain in force indefinitely, Sheridan's contract was for a set term that had expired and therefore ABC had not terminated her but simply chosen not to rehire her for another fixed-term contract.[21] However, the court declared that Sheridan was free to file an amended lawsuit alleging that ABC retaliated against her for complaining about unsafe working conditions.[22] A further appeal made by Sheridan to the California Supreme Court was rejected in November 2012,[23] A new trial based solely on the retaliation claim was set for December 2013,[24] but this too was dismissed in October 2013 by a judge who stated that Sheridan should have exhausted her claims through a labor commissioner before pursuing a trial.[25] A further attempt by Sheridan to secure a new trial was refused on 16 January 2014,[26] however the same judge reversed his decision on 29 January 2014 and granted Sheridan a new trial.[27] This decision was later reversed in August 2014 by the Los Angeles Court of Appeal who found the judge's decision to grant Sheridan a new trial was in error.[28]

In 2010, Sheridan was cast in an untitled CBS comedy pilot as a mother who battles with her British ex-husband (played by Paul Kaye) to get her teenaged daughter to stardom,[29][30] but the show was not picked up. In September 2010, Sheridan starred in the Hallmark Channel film, Honeymoon for One, which was set in Ireland. The film premiered on the Hallmark Channel on 13 August 2011.[31] In 2013, she starred and co-produced another Hallmark movie, called The Christmas Spirit. In an interview in November 2013, Sheridan announced that she was hoping to find a network for a half-hour comedy series that she is currently writing herself.[32] She also co-starred in two independent comedy movies, Jewtopia (2012) and Let's Kill Ward's Wife (2014). In 2016, she filmed one more Hallmark movie, called All Yours.[33]

On 28 November 2017, it was announced that Sheridan was cast in The CW revival of Dynasty as Alexis Carrington, a role played by Joan Collins in the original series.[34][35] Mark Pedowitz, the president of The CW, who had been president of ABC Studios during Sheridan's run on Desperate Housewives, called her about the role himself. He said, "I was big fan of Nicollette from way back when. She wanted it, and she will be great in it."[36] She received positive reviews for her debut as Alexis,[37][38] and was promoted to series regular status for the second season.[39]

From 1979 to 1985, Sheridan dated singer and actor Leif Garrett.[40] While still in their teens, she moved into his family home with permission from his father and her mother. After her career took off shortly afterwards, she left him and began dating other teen idols such as Scott Baio, Jimmy Van Patten, and Roger Wilson. Two decades later, Garrett credited Sheridan for helping him at the start of his career, and said of her, "She's a special person in my life."[41]

Sheridan married actor Harry Hamlin on 7 September 1991. The pair had starred together in the 1990 TV movie Deceptions. Hamlin filed for divorce on 21 August 1992.[42]

She began seeing Swedish personal trainer Nicklas Söderblom in 2004 and became engaged to him on New Year's Eve 2004; the pair called off the engagement in October 2005.[43][44]