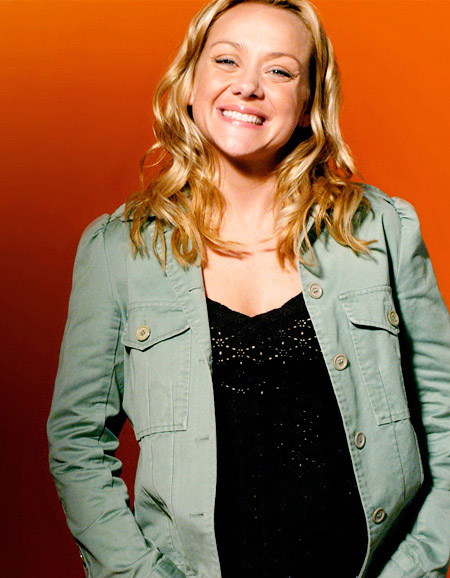 Nicole Julianne Sullivan (born April 21, 1970) is an American actress, voice artist and comedian. Sullivan is best known for her six seasons (1995-2001) on the sketch comedy series MADtv. She also played the role of Holly Shumpert for five seasons (2001-2005, 2007) on the CBS sitcom The King of Queens.

She has played a recurring character, Jill Tracy, on Scrubs and voiced the villainous Shego in Disney's Kim Possible. She had recurring voice roles on Family Guy and voiced "Franny Robinson" in Disney's Meet the Robinsons. From 2008 to 2009, Sullivan starred in and was the lead of her own Lifetime television series Rita Rocks. From 2008 to 2013, she voiced Marlene in The Penguins of Madagascar. Sullivan played Jules' (Courteney Cox) therapist, Lynn Mettler, on the comedy Cougar Town. She portrayed Lyla in the Disney Channel original movie Let It Shine in 2012. In 2013, she starred in the short-lived Nickelodeon sitcom Wendell and Vinnie as Wilma Basset.

Sullivan was born in Manhattan. She is the daughter of Edward C. Sullivan, a New York State assemblyman.[1] She took dance classes at age 7 and performed in Off Broadway and Broadway productions with the First All-Children's Theatre. Sullivan's mother, a business woman, and her father, who represented Manhattan's 69th Assembly District in the New York State Assembly from 1977 to 2002, moved the family upstate to Middleburgh, New York, in 1982. During high school, Nicole was class treasurer throughout her junior year. She played soccer in high school, recorded statistics for the boys’ basketball team and was a member of student council.

After graduating from Middleburgh in 1987,[2] she attended Northwestern University as a theatre major. She studied William Shakespeare, Harold Pinter, Anton Chekhov, Henrik Ibsen and Greek tragedies while working two jobs to pay her way through college and writing plays and sketches for the student theatre. Sullivan spent her junior year in London, studying at the British American Drama Academy and became a member of the Greenwich Shakespeare Company. Sullivan graduated from Northwestern with honors and then moved to Los Angeles to start a television career. After appearing in commercials and sporadic guest roles on shows including Herman's Head, she was recruited to join the cast of MADtv.

Sullivan was among the original cast members on MADtv when it premiered in 1995. She created numerous characters; her most popular was the mean-spirited Vancome Lady. Sullivan's other characters included X-News reporter Amy, dimwitted Antonia, Eracists leader Debbie, News at 6's Diane Lawyer-Trabajo (pronounced "trebalyo"), racist country singer Darlene McBride, and Latina bimbo Lida. Sullivan appeared with Michael McDonald in a MADtv sketch about making an audition tape to appear on Law & Order that mocked their acting prowess; she later guest-starred in the Law & Order: Special Victims Unit season one episode "Contact". Sullivan was featured in the Nov/Dec 2009 issue of Making Music Magazine.[3]

Sullivan was originally cast as Turanga Leela, one of the main characters in the animated series Futurama but the role was recast with Katey Sagal before the show went to air.[4][5]

Sullivan has voiced Marlene the Otter on The Penguins of Madagascar - a spin-off series from the successful hit movies Madagascar, Madagascar: Escape 2 Africa, and Madagascar 3: Europe's Most Wanted - which aired on Nickelodeon, Shego on Kim Possible; Joan of Arc on Clone High; Mira Nova on Buzz Lightyear of Star Command; and Joan on the Family Guy episode, "I Take Thee Quagmire", along with several other one time voices on the show. Sullivan has also starred in a pilot called Me and My Needs that was rejected by ABC. She played Franny Robinson in Meet the Robinsons. Also, Sullivan was a voice actor in the Monsters, Inc. video game. She played Luna in the 2007 video game Ratchet & Clank: Size Matters. In 2012, she also provided the voice of Supergirl in Super Best Friends Forever, a series of animated shorts airing on Cartoon Network's DC Nation block.[6]

Sullivan won the first edition of Celebrity Poker Showdown. Her charity was Alley Cat Allies, a nonprofit advocacy organization dedicated to transforming communities to protect and improve the lives of cats, which received $100,000 as a result of her victory.