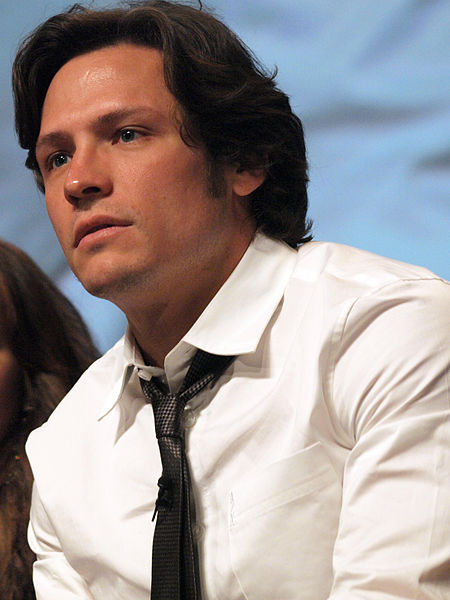 Samuel Nicholas Wechsler[1] (born September 3, 1978[2]), known as Nick Wechsler, is an American actor. He is known for his roles as Kyle Valenti on The WB teen drama series Roswell, and as Jack Porter on the ABC primetime soap opera Revenge.

Wechsler was born in Albuquerque, New Mexico.[1][2] When he was 14, his elder brother, aged 24, died of cancer.[3] He moved to Hollywood immediately after graduating from high school.[4] He soon landed a small role as a purse-stealing punk in the television movie Full Circle. Shortly after, he was cast as Kevin "Trek" Sanders, a child prodigy conceived at a Star Trek convention, in the syndicated series Team Knight Rider.[4] He also appeared in Silk Stalkings,[citation needed] The Lazarus Man,[citation needed] and the direct-to-video film The Perfect Game.

From 1999 to 2002, Wechsler starred as Kyle Valenti on the television series Roswell. After Roswell, he guest starred in number of television series, including Malcolm in the Middle, North Shore, Cold Case, Crossing Jordan, Terminator: The Sarah Connor Chronicles, Lie to Me, It's Always Sunny in Philadelphia and Chase. In 2008, he appeared in the independent film Lie to Me, about a couple navigating the hazards of an open relationship. From 2007 to 2008, he appeared in three episodes of Without a Trace.[5]

In 2011, Wechsler won the main role of Jack Porter on the ABC series Revenge, playing the love interest of lead character Emily Thorne.[6][7] After Revenge ended in 2015 Wechsler took a role on the NBC action series The Player.[8] In 2016, he was cast in a recurring role in the fourth season of the NBC cop drama Chicago P.D.[9][10] He took on a recurring role as Brandon Cole on NBC's Shades of Blue for the show's third season.[11]

Wechsler at the PaleyFest in March 2012