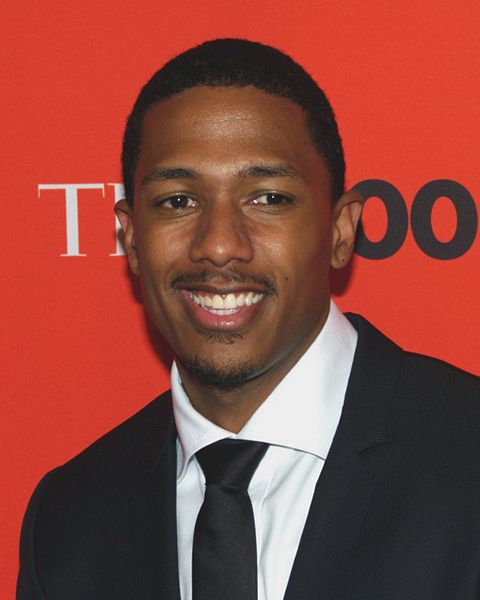 Nicholas Scott Cannon (born October 8, 1980)[1] is an American rapper, actor, comedian, director, screenwriter, film producer, entrepreneur, record producer, and radio and television personality. On television, Cannon began as a teenager on All That before going on to host The Nick Cannon Show, Wild 'N Out, America's Got Talent, and Lip Sync Battle Shorties. He acted in the films Drumline, Love Don't Cost a Thing, and Roll Bounce. As a rapper he released his debut self-titled album in 2003 with the hit single "Gigolo", a collaboration with singer R. Kelly. In 2007 he played the role of the fictional footballer TJ Harper in the film Goal II: Living the Dream. In 2006, Cannon recorded the singles "Dime Piece" and "My Wife" for the planned album Stages, which was never released. Cannon married American R&B/pop singer Mariah Carey in 2008. Carey filed for divorce in December 2014, after six years of marriage. The divorce was finalized in 2016.

Cannon was born on October 8, 1980, in San Diego, California. Cannon was largely raised by his paternal grandfather, whom both he and his biological father called 'dad'. As a kid Cannon grew up in Lincoln Park's Bay Vista Housing Projects, which is a gang-ridden section in Southeast San Diego. While in his teenage years he was affiliated with the "Lincoln Park Bloods" street gang, but stated that he left behind his affiliations after losing a close friend.[2][3] In 1998, he graduated from Monte Vista High School in Spring Valley, where he was president of the African Student Coalition and participated in track and field.[4] Cannon received his first break doing stand-up comedy on his father's local cable access program.[5]
Read more...

As a teenager, Cannon formed the rap group "Da G4 Dope Bomb Squad" with his friend Steve Groves; they opened for the likes of Will Smith, LFO, 98 Degrees, and Montell Jordan.

After signing with Jive Records in 2001, he was featured alongside Romeo Miller and 3LW on the Jimmy Neutron: Boy Genius soundtrack with a cover of the 1988 hit song "Parents Just Don't Understand".[6] His debut self titled album was released in 2003 and included the single "Your Pops Don't Like Me (I Really Don't Like This Dude)".[7]

In 2005, Cannon formed his own record label, Can-I-Ball Records, with plans to release his second studio album, entitled Stages, later that year.[8] The album's first single, "Can I Live?", a pro-life song, was released in July 2005[9] followed by the second single "Dime Piece" in March 2006.[9] It was never released because of Nick Cannon's acting career.

2009-12: N'Credible Entertainment, Slick Nick and Child of the Corn

In 2009 Nick Cannon formed a new label after cancelling his old label Can-I-Ball Records entitled N'Credible Entertainment. In 2010, Cannon created a parody of hip hop pioneer Slick Rick entitled "Slick Nick". He released two songs by the character such as "I'm a Slick Rick", a freestyle of Cali Swag District's "Teach Me How to Dougie" in which he attempted to diss hip hop mega-star Eminem, and "Nick's Story", a freestyle rap version of Slick Rick's "Children's Story". On December 6, 2011, Nick Cannon released his debut mixtape entitled Child of the Corn.[10]

On July 26, 2013 Nick Cannon premiered his new single "Me Sexy" and announced over seven years after the shelving of his album Stages that he was working on a new second studio album entitled White People Party Music featuring collaborations with Afrojack, Pitbull, Future and Polow da Don.[11][12]

On November 16, 2016, Nick Cannon released his second mixtape The Gospel of Ike Turn Up: My Side of the Story.[14] Prior to the release of the mixtape, a music video for the single "If I Was Your Man" was released on November 7, 2016. The song features Jeremih and the music video features a cameo appearance by Chili of TLC.[15]

In 2005, Cannon created, produced, and hosted the MTV improv comedy series Wild 'N Out.[17] That same year he hosted the so-called slime stunt on Nickelodeon's 2005 Kids' Choice Awards in which a human cannonball was shot into slime. He also hosted the first and only season of Nickelodeon's Friday Night Slimetime. In addition, he was the DJ on Ellen DeGeneres's Bigger, Longer, And Wider show. On December 11, 2009, Cannon hosted the Nickelodeon HALO Awards along with Justin Timberlake, Hayden Panettiere, LeBron James, Kelly Rowland and Alicia Keys.

On November 12, 2012, MTV2 announced that the revival of Wild 'N Out. The revived show was produced by Cannon's Ncredible Entertainment, the series premiered in 2013 with a few returning faces joined by a roster of fresh talents. When asked about the show coming back, Cannon said, "With our show's original cast, everyone from Kevin Hart to Katt Williams, Affion Crockett and Taran Killam becoming household names, I am looking forward to working with MTV2 as we work to introduce the biggest comedic stars of tomorrow with the return of Wild 'N Out."[18] Rapper Big Boi of Outkast has confirmed in a tweet on Twitter he is shooting an episode on January 29, 2013 in NYC and for people to join in the audience.[19]

On November 4, 2013, Cannon was the master of ceremonies as well as an honoree at the annual Ebony Magazine Power 100 Awards.[21] In 2014, he began hosting Caught on Camera with Nick Cannon on NBC.

Departure from America's Got Talent

From 2009 to 2016, Cannon served as the host of America's Got Talent. He announced he would not be back for 2017, citing creative differences between him and executives at NBC. The resignation came in the wake of news that the network considered firing Cannon after he made disparaging remarks about NBC in his Showtime comedy special, Stand Up, Don't Shoot. "I love art and entertainment too much to watch it be ruined by controlling corporations and big business," Cannon said in a statement, referencing cable giant Comcast's ownership of NBC.[23] Cannon, however, was technically under contract to host America's Got Talent and could have been potentially sued by NBC for breach of contract, though this was considered unlikely. NBC executives did not accept his resignation and had been stated to be keeping their fingers crossed that he would instead choose to return.[24] On February 16, 2017, Cannon stated that he planned to stand his ground when it came to resigning from America's Got Talent.[25] Cannon's resignation was ultimately accepted as final without further incident. He was replaced in his position as host of America's Got Talent by Tyra Banks, known for also having hosted America's Next Top Model.[26]

Cannon is now the chairman of TeenNick for Nickelodeon and the development and creative consultant of the network since 2009. In 2012, Nick Cannon created a sketch-comedy series, Incredible Crew, starring six teenagers as Cannon wrote and produced the theme song. The show was produced by Cartoon Network Studios, in association with Ncredible Entertainment.

On November 30, 2012, a picture of Nick was posted on the Ncredible Entertainment website, which reported that Nick signed a deal with NBCUniversal to produce scripted and unscripted material for the network.[27]

In 2015, Cannon was named as "Chief Creative Officer" for the now-defunct RadioShack.[28] According to the company this role involved "creating RadioShack-exclusive products and curating the in-store experience."[28] RadioShack chose him in hopes of catering to a younger crowd.[28]

Cannon has a weekly chart program called Cannon's Countdown that is syndicated by CBS Radio.[29]

In early 2011, Cannon recorded his first stand-up comedy special titled Mr. Showbiz at the Palms Casino Resort in Las Vegas. The special premiered on Showtime on May 14, 2011. A digital release of Mr. Showbiz became available on iTunes beginning May 16, 2011, with a physical release of the album on May 31, 2011.[31]

Cannon married singer Mariah Carey on April 30, 2008, at her private estate on Windermere Island in The Bahamas.[32] On April 30, 2011, their third wedding anniversary, Carey gave birth to fraternal twins:[33] daughter Monroe (after Marilyn Monroe) and son Moroccan Scott, because Cannon proposed to Carey in her Moroccan-style room; Scott is Cannon's middle name and his grandmother's maiden name. Monroe, like her mother, has no middle name.[34] After six years of marriage, the pair separated, and Carey filed for divorce in 2014,[35][36][37] which was finalized in 2016.[38] Following a brief relationship, Cannon had another child, son Golden "Sagon" Cannon, with Brittany Bell on February 21, 2017.[39][40]

Cannon was hospitalized on January 4, 2012, for treatment of "mild kidney failure", and again on February 17 after a pulmonary embolism.[41] On March 5 he announced that his kidney problems were due to lupus nephritis.[42] Cannon enrolled at Howard University in 2016.[43]

In 2011, Cannon filmed a public service announcement for Do Something encouraging teens to find a cause about which they are passionate and take action in their communities.[44] Since 2011, Cannon has served as the celebrity spokesperson for the National Association of Letter Carriers' annual national food drive, which is held throughout the United States on the second Saturday in May.[45]

In November 2016, Cannon was widely reported as commenting on his opposition to abortion, saying that abortion is modern-day eugenics and population control.[46]

Eminem responded with a mixtape-style track called "The Warning" in which he addressed both Cannon and Mariah, and later commented that he was finished talking about the subject.

The feud was thought to have been over until in September 2010 when Cannon responded with the song "I'm a Slick Rick", in which he takes shots at Eminem in Slick Rick's flow over the instrumental for Cali Swag District's "Teach Me How to Dougie".[47] This was followed by a campaign via Facebook, Twitter, and his radio show proposing a boxing ring fight between Eminem and Cannon for charity.

In late September 2011, over a year after "I'm a Slick Rick" was released, Cannon took another lyrical jab at Eminem by releasing a song called "I Remember".[48][49]

On October 3, 2011, Cannon released another song called "Warning (Remix)" featuring Uncle Murda, aimed at Eminem, radio host Charlamagne Tha God, and the feud between R&B singer Ray J and rapper Fabolous. The song features Cannon firing lyrical shots at Eminem and an audio clip of Eminem with Tim Westwood back in 2009 where Eminem saying: "I had no idea Nick Cannon was going to start 'wiling out' on me," referring to Cannon's then canceled Wild 'n Out television show. Cannon retorted to the clip by saying: "You said it Marshall, that's all you had to do!" and that Slim Shady is "forgiven."[50][51][52][53]

On June 2, 2016, Cannon had an interview with Tim Westwood. Westwood said, "Last time I saw you, you were getting ready to battle Eminem." Cannon responded, "I'm still ready! I'm trying to find him. Where is he? ... We gonna be out in the States for the BET Awards. I'm holding a $100,000 battle — whoever wants it — but it has to be someone who can put up 100 grand ... I done reached out to Tyga, he didn't want it. I went to all Slaughterhouse. I did it like Mortal Kombat, I said I'll take all of them out to get to the boss." Throughout the interview, Westwood goads Cannon along, saying, "Nick, you're the best fam. I don't think you'd win against Eminem, but you are the best in many other ways." Cannon plays along with everything and says, "At least tell him to show up to the match. I can't win by default."[54][55]

On June 16, 2016, Cannon pours out his heart in a track titled "Divorce Papers." He recently refused to sign divorce papers with his ex-wife Mariah Carey. He also mentioned his father passing away. Cannon used some lines in the track as a response for the hate comments he had from Eminem's fans, who are known as "Stans". He mentions Eminem in a few lines. He said that he can relate to the drug life Eminem had. "Em, right now I could really relate to him. Drug habits, all the pain that he was in." The last thing he mentioned in the track, he talks about himself finally signing the divorce papers. "It's been over two years and I'm the one that's been waitin'. It's fucked up that the time that you spend with your own kids is called 'visitation'? Man, fuck it, let's sign these papers."[56]