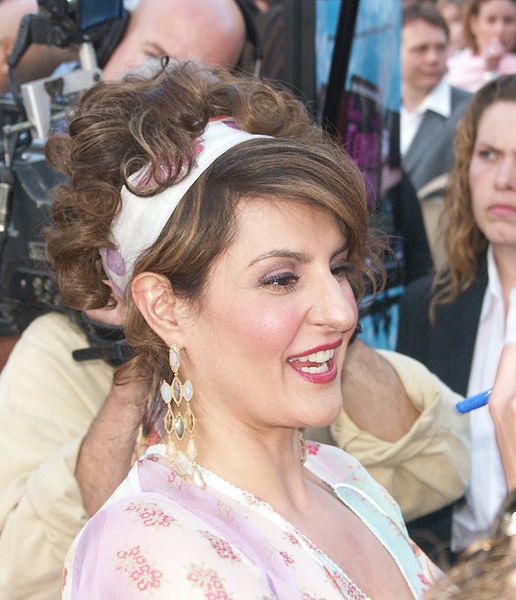 Antonia Eugenia "Nia" Vardalos (born September 24, 1962; Greek: Νία Βαρντάλος) is a Canadian-American actress, screenwriter, and producer of Greek descent. Her most notable work is the 2002 film My Big Fat Greek Wedding, which was based on a one-woman stage play she dramatized and in which she starred.

Vardalos was born in Winnipeg, Manitoba on September 24, 1962. She is the daughter of Greek Canadian parents Doreen Christakis, a bookkeeper and homemaker, and Constantine "Gus" Vardalos, a land developer.[1][2][3] She attended St. George School and Shaftesbury High School in Winnipeg and Ryerson University[4] in Toronto. She married American actor Ian Gomez on September 5, 1993. Gomez converted to Greek Orthodoxy prior to marrying her. She became a U.S. citizen in 1999. In 2008, they adopted a daughter whom they named Ilaria. She posted an advice column about the adoption process at The Huffington Post.[5] But it was announced on July 3, 2018 that Vardalos had filed for divorce from Gomez, after 23 years of marriage, due to irreconcilable differences.[6]
Read more...

Vardalos at the Connie and Carla premiere on the Universal City Walk, Los Angeles, April 2004

An alumna of the Chicago-based Second City comedy repertory company, Vardalos had many small roles in television shows such as The Drew Carey Show and Two Guys and a Girl; in addition, she provided voices for the 1996 radio adaptation of Star Wars: Return of the Jedi which Brian Daley had written for National Public Radio.

She gained fame with her movie about a woman's struggle to find love in My Big Fat Greek Wedding, which was based on a one-woman show which Vardalos had previously written for the theater, basing it on her own personal experiences, and starred in onstage. The film was a huge critical and commercial success. The film earned Vardalos an Academy Award Nomination for Best Writing, a Golden Globe Nomination for Best Actress in a Motion Picture Musical or Comedy and a Screen Actors Guild Award Nomination.[citation needed]

The sleeper hit, which quickly became one of the highest-grossing independent films of all time, led to the unsuccessful CBS spin-off series, My Big Fat Greek Life. The show was cancelled after seven episodes and featured the entire cast from the film, aside from John Corbett.[7]
Her next film, released in 2004, was Connie and Carla, a musical about two women pretending to be drag queens.[7]

Vardalos made her directorial debut in 2009 with the independent feature I Hate Valentine's Day. The film, about a florist finding romance, received only a limited release and grossed $1,985,260 at the international box-office. This was followed by My Life in Ruins, about a misguided tour-guide travelling around Greece and featuring Academy Award winner Richard Dreyfuss. The film was the first American production given permission to film at the Acropolis; Vardalos sought the approval from the Greek government. The film was a moderate success at both the international box-office and DVD sales.[7]

In 2011, Vardalos collaborated with Tom Hanks to write the romantic comedy film Larry Crowne for the screen. The film received moderate reviews and was a commercial success, grossing $59.8 million; Vardalos also voiced the character Map Genie in the film. As of 2013, Vardalos was slated to star in the upcoming films Talk of the Town (2012) and A Wilderness of Monkeys (2013).[7]

Vardalos with husband Ian Gomez in 2012

Vardalos joined many celebrities helping to produce The 1 Second Film art project; she herself was featured in The Dialogue, an interview series. In this 90 minute interview with producer Mike DeLuca, Vardalos talked about how her experiences in The Second City comedy troupe helped her as an actress and a screenwriter, and how the unofficial "tell-the-Greek" word-of-mouth program had a hand in catapulting her movie to such great heights. She performed The Beatles song "Golden Slumbers" on the 2006 charity album Unexpected Dreams - Songs from the Stars. Vardalos's struggle to become a mother, which ultimately led her and then husband Ian Gomez to adopt after thirteen distinct in vitro fertilization attempts had failed, made its way into a book she wrote, Instant Mom, which was published in 2014.

Vardalos likewise starred in and co-wrote the sleeper hit My Big Fat Greek Wedding 2, which was released in March 2016.[8] It was less successful than the original had been; however, it earned over $60 million from an $18 million budget.

Beginning in 2015, Vardalos and Gomez co-presented The Great American Baking Show, formerly known as The Great Holiday Baking Show, for ABC-TV.[9] But with the failure of the Gomez-Vardalos marriage, it was not known, as of the first week of October of 2018, whether they would continue to do so.