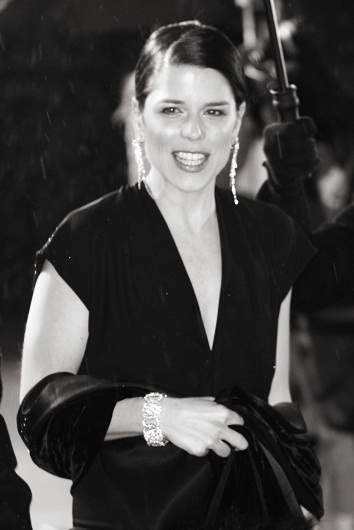 Neve Adrianne Campbell (/ˈnɛv ˈkæmbəl/; born October 3, 1973) is a Canadian actress. She is best known for her starring role as Julia Salinger on the Fox television drama series Party of Five (1994-2000), and as Sidney Prescott in the horror film franchise Scream (1996-2011).

Campbell was born as Neve Adrianne Campbell on October 3, 1973 in Guelph, Ontario. Her Dutch mother, Marnie (née Neve), is a yoga instructor and psychologist from Amsterdam.[1] Her Scottish father, Gerry Campbell, immigrated to Canada from his native Glasgow, Scotland,[2] and taught high school drama classes in Mississauga, Ontario. Campbell's maternal grandparents ran a theater company in the Netherlands, and her paternal grandparents were also performers. On her mother's side, Campbell is descended from Sephardi Jews who immigrated to the Netherlands and converted to Catholicism. She has stated, "I am a practicing Catholic, but my lineage is Jewish, so if someone asks me if I'm Jewish, I say yes."[3][4]

Campbell has three brothers: Christian, Alex, and Damian. Her parents divorced when she was two years old. At age six, she saw a performance of The Nutcracker and decided she wanted to take ballet, enrolling at the Erinvale School of Dance. She later moved into residence at the National Ballet School of Canada, training there and appearing in performances of The Nutcracker and Sleeping Beauty.[2] After accumulating numerous dance-related injuries, Campbell moved into acting at the age of 15, performing in The Phantom of the Opera at the Canon Theatre in Toronto while attending John F. Ross Collegiate Vocational Institute in Guelph.[5]

Campbell at the Emmy Awards in 1997

Campbell appeared in a 1991 Coca-Cola commercial and promoted its sponsorship on Bryan Adams' Waking Up the Nation Tour (1991-1992). Her first starring role was as Daisy in the Canadian-youth series Catwalk (1992-1994). She made several guest appearances on shows, such as The Kids In The Hall, Are You Afraid of the Dark? and Kung Fu: The Legend Continues. In early 1994 Campbell went to Los Angeles to find a talent manager to represent her, and ended up going on several auditions while she was looking.[6] One of these auditions was for Party of Five, which cast her in the role of orphaned teenager Julia Salinger, whereupon Campbell packed up her belongings in Canada and moved to the United States. Described as "television's most believable teenager", Campbell rose to fame in the United States through Party of Five, which ran for six seasons from 1994 to 2000.[7] The show garnered critical acclaim and won the Golden Globe Award for Best Drama in 1996. The show was cancelled after Campbell decided not to renew her contract for a seventh season, in order to have the freedom to pursue film work.[8]

Campbell's first widely released film was The Craft (1996). She starred as Sidney Prescott in Scream (1996), which was a huge success, earning over $173 million at the worldwide box office and winning critical acclaim. Her role has received significant critical praise throughout the Scream series, earning her the Saturn Award for Best Actress for her role in Scream. The film was followed by three sequels, all of which were also successful, with Scream 2 (1997) earning over $170 million, Scream 3 (2000) over $160 million, and Scream 4 (2011) over $97 million. Campbell won the MTV Movie Award for Best Female Performance for Scream 2. In his review of Scream 3, Roger Ebert wrote: "The camera loves her. She could become a really big star and then giggle at clips from this film at her AFI tribute."[9] Campbell appeared in the 1998 films, Wild Things and 54, both of which were moderately successful. That same year, she voiced Kiara in the Disney animated direct-to-video musical film sequel, The Lion King II: Simba's Pride.

Campbell at the 2006 BAFTA Awards

Following the third film in the Scream series, Campbell appeared in several films that received a limited theatrical release but were well reviewed by critics, including the 2000 film Panic, in which she starred with William H. Macy and Donald Sutherland. In 2002, she starred in Last Call with Sissy Spacek and Jeremy Irons, for which she won a Prism Award for Performance in TV Movie or Miniseries. Campbell co-wrote, produced and starred in the 2003 film The Company, about Chicago's Joffrey Ballet, and the independent film When Will I Be Loved (2004), which was praised by critic Roger Ebert,[10] but received only a brief and limited theatrical release. In Leonard Maltin's Movie Guide (2009 edition), the film critic describes it as an "Unlikable film ... crammed with coldhearted characters who are obsessed with big bucks, sleazy sex, and endless hustling."

In March 2006, Campbell made her West End theatre debut, in a version of Arthur Miller's Resurrection Blues at the Old Vic theatre. Matthew Modine and Maximilian Schell also appeared in the play, which received mixed reviews. Resurrection Blues was directed by Robert Altman, with whom Campbell had previously worked in The Company.[11] Later in 2006, Campbell performed again in the West End in Love Song, alongside Cillian Murphy, Michael McKean and Kristen Johnston, to mixed reviews.[12] On June 24, 2009, Campbell returned to television in a starring role on NBC's short-lived drama series The Philanthropist.

It would have to be something really special and really different. They'd have to be really convincing about who they decided to bring on as director, and I'd still have to do a bit of soul-searching on that one.

— Campbell on the possibility of returning to the Scream series[13]

In 2011, Campbell reprised her role as Sidney Prescott in the horror film Scream 4 and starred in The Glass Man, which received a limited release, and the film Singularity, which premiered at Cannes Film Festival in May 2012. She also appeared in the 2012 miniseries Titanic: Blood and Steel, and starred in the 2013 Lifetime film An Amish Murder. Campbell guest-starred in several television series, including Medium, The Simpsons, Grey's Anatomy, Mad Men and Welcome to Sweden.

In 2015, she guest starred in the WGN series Manhattan. On June 30, 2015, it was announced that Campbell would star in the Netflix television drama House of Cards, beginning in the fourth season. She portrayed Texas based political consultant LeAnn Harvey.[14] On June 22, 2017, it was reported that Campbell would star in Rawson Marshall Thurber's action film Skyscraper. She played Sarah Sawyer, the wife of Will (Dwayne Johnson). The film was released on July 13, 2018.[15] Campbell also co-starred as Valerie Gannon in the 2018 independent drama film Hot Air.[16]

Campbell married Jeff Colt on April 3, 1995. The couple met when he was a bartender at Toronto's Pantages Theatre, where she was performing. They divorced in May 1998.

In 2005, Campbell began dating John Light, whom she met while filming Investigating Sex. They became engaged in December 2005 and married in Malibu, California, on May 5, 2007.[17] The couple lived together in Islington, London for five years,[18] until Campbell filed for divorce on June 30, 2010, in Los Angeles.[19]

In March 2012, Campbell and her boyfriend, JJ Feild, confirmed that they were expecting their first child together.[20] Their son, Caspian, was born in August 2012.[21] On June 29, 2018, Campbell announced the adoption of their second son, Raynor, on Instagram.[22]