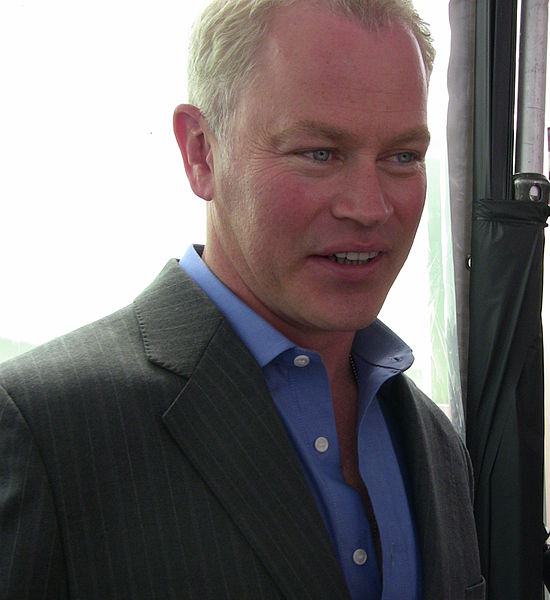 Neal P. McDonough[1] (born February 13, 1966) is an American actor and voice actor, known for his portrayal of Lieutenant Lynn "Buck" Compton in the HBO miniseries Band of Brothers (2001), Deputy District Attorney David McNorris on Boomtown (2002-2003), Sean Cahill on Suits, Robert Quarles on Justified, William Parker in Mob City, and Dave Williams on ABC's Desperate Housewives (2008-2009). He also appeared in films such as Star Trek: First Contact, Minority Report, Walking Tall, The Guardian, Flags of Our Fathers, Red 2, The Marine 3: Homefront, Traitor, The Hitcher, Paul Blart: Mall Cop 2, Proud Mary, and as Dum Dum Dugan in various Marvel Cinematic Universe films and TV series. He appeared as Damien Darhk on Arrow, and in Legends of Tomorrow, as well as voicing a variety of comic superheroes and villains in a number of animated films and video games.

McDonough was born in Dorchester, Massachusetts, the son of Catherine (née Bushe) and Frank McDonough, motel owners who emigrated from Ireland, with his mother coming from County Tipperary and his father from County Galway.[2][3] McDonough grew up in Barnstable, Massachusetts and was raised Roman Catholic.[4] His childhood nickname was "Headster", which McDonough says originated in his brothers' teasing him about the size of his head.[5] He graduated from Barnstable High School, and attended Syracuse University, where he was initiated and became a member of the Sigma Chi Fraternity and graduated with a Bachelor of Fine Arts degree in 1988. He had obtained several college scholarships to play baseball, but he decided to go to Syracuse as he thought it had the best theater department.[6]
Read more...

In 1991, McDonough won the Best Actor Dramalogue for "Away Alone". McDonough has made many television and film appearances since then, including Band of Brothers, Boomtown, Star Trek: First Contact, Minority Report and The Hitcher. McDonough played Dave Williams on the fifth season of Desperate Housewives.[7] He also starred in the lead role on 2004 medical drama Medical Investigation for its one full season.

McDonough was set to star in the ABC dramedy Scoundrels,[8] but was fired for refusing to act in sex scenes, citing his family and Catholic faith as basis for his decision.[9][10]

In 2011, McDonough appeared as Marvel comic book character Dum Dum Dugan in Captain America: The First Avenger. McDonough also voiced the character in the 2011 movie tie-in video game, Captain America: Super Soldier. He reprised his role in the 2013 short film, Agent Carter possibly reprising the role in future projects.[citation needed] He made a cameo appearance in the first episode of the second season of Agents of S.H.I.E.L.D.. He also appeared in an episode of Agent Carter.

In 2012, McDonough had a recurring role in the third season of FX's Justified as Robert Quarles, a sadistic, carpetbagging mobster from Detroit.[12] He was later cast as Police Chief Parker in Frank Darabont's TNT pilot Mob City.[13]

During the 2014 Winter Olympics opening ceremony on NBC, McDonough was featured in a high-profile and frequently aired Poolside commercial for the Cadillac ELR hybrid electric car.[14]

In 2015, McDonough was cast as DC Comics villain Damien Darhk on the fourth season of Arrow.[15]