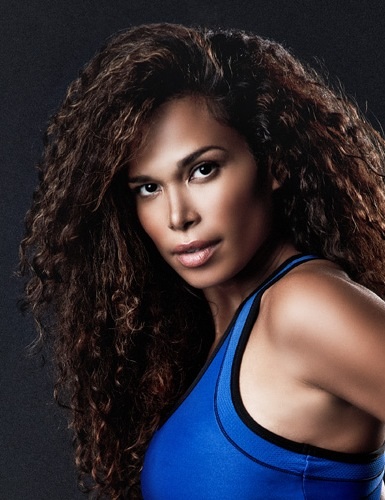 Natashia Williams-Blach (born August 2, 1978) is an American actress, singer, and former Wonderbra campaign model, who is perhaps best known for her role as Shane Phillips in the NBC/syndicated series She Spies.

She also co-starred in So Little Time, opposite Mary-Kate and Ashley Olsen and the Nickelodeon series Romeo! from 2004 to 2006.

She appeared on the seventh season of American Idol as Natashia Blach, having married photographer Brevin Blach. She made it through the Hollywood round to the top 50 but got cut just before the Top 24 were selected.

She has written and published a book, The Clever Little Book on Modeling, most widely available on Amazon.com (2013)

Natashia Williams began her film and television career at the age of 16, appearing first on Saved by the Bell: The New Class. Shortly after accepting a scholarship to attend the University of California Los Angeles (UCLA), she landed her first movie role in 'Def Jam's How to Be a Player". Originally signed to play a smaller supporting role, she made such an impression as the 'Girl in Pink' that her character was extended throughout much of the film and was pictured prominently on the movie poster and billboards. She then began modeling with the Ford Agency and managed to maintain her studies while modeling in various photo shoots and filming television guest star roles in between. She appeared in the ad campaigns of Wondebra, Old Navy, Hanes and Sketchers in addition to being featured in many other numerous publications and runway shows.

Her time was divided heavily between the East and West Coast, modeling and filming more features and television appearances such as Howard Stern's cult comedy Son of the Beach as well as "Smart Guy", 'Malcolm and Eddie', 'The Parkers' 'Girlfriends and the film Two Can Play That Game, appearing alongside Morris Chestnut and Vivica A. Fox. Her first starring role on a series came in 2001, playing 'Tedi' on the show So Little Time alongside the Olsen Twins. She then took a temporary leave from UCLA to film full time. Soon after wrapping production on the then Fox Family series, Williams soon stepped into the role of 'Shane Phillips', one of three women known as She Spies, also starring Kristen Miller and Natasha Henstridge. The show featured three beautiful ex-cons working for the government with the tag line "Bad Girls Gone Good". It conjured high expectations for NBC, with an experimental filming approach featuring musical vignettes, breaking the fourth wall, all while parodying the entire spy-adventure TV show genre. The project was already purchased for syndication but lasted only two seasons due to sliding ratings. She appreciated a larger scope of viewership and fanbase afforded by the show, however; and there she began long lasting relationships with many local and national charities, including the 'Showbiz Kids Foundation'. In the wake of the tragic tsunami of 2004, Williams lent her voice alongside an all star lineup of singers and musicians including Brian McKnight, Mýa and Papa Roach to record "Forever in Our Hearts", led by musical group Godhead founder Jason Miller, with proceeds raised to help the victims of the disaster. That summer she competed in the Fox Summer Music Jam, and beat a dozen other female celebrities in the beauty/talent contest for a $20,000 donation to the charity of her choice. She chose the Los Angeles Mission and still works closely with the organization for the local homeless to this day. Williams then starred as stepmother to Romeo Miller in the series Romeo! on Nickelodeon, also starring and produced by Master P. She played Angeline Miller for the last two of the show's three-season run. Williams began to produce music herself and singing the National Anthem for several sporting events, including her hometown Los Angeles Lakers basketball game. She then booked a pilot, "Filthy Gorgeous" about the subworld of high-class prostitutes, starring alongside actress and spokesmodel Isabella Rossellini. The pilot was not picked up although the single filmed episode aired on Showtime Networks. She then made a cameo appearance, giving Anna Faris an "enlightening motorcycle ride" in the comedy "Smiley Face". After guest-starring on both CSI Miami and "CSI New York", nearly back to back, she gave birth to her first child, Talan, with husband Brevin Blach.

Williams then took a break from the business, and while retreating temporarily with family in Fort Collins, Colorado, she decided to try out for American Idol "on a dare" and made it all the way through to the top 25 contestants of season 7. Her outstanding rendition of "At Last" by Etta James during the try-outs threw off many fans and viewers alike, whom had not learned of her recent name change from marriage or her relocation. Some web postings suggested Williams was made to be a "plant" in the competition, given she already had a career and singing credits to her name. She recounted the time: "It was so much fun getting to be myself, not as the actor or celebrity, but as just another face in a sea of hopefuls, just wanting to sing." Her voluntary obscurity wouldn't last long. She then returned to film making, starring in the Paramount Pictures psychological thriller, Circle of Eight and then a recurring role on the CW television show Vampire Diaries, playing "Lucy", cousin to the long line of Bennett Witches on the show. In 2011, Natashia gave birth to her second child, Braden, and continues to work as a model and actor. In 2012, Natashia wrote a book based on her life and career as a fashion model: The Clever Little Book on Modeling is set for release on Amazon.com and Kindle in the spring of 2013.