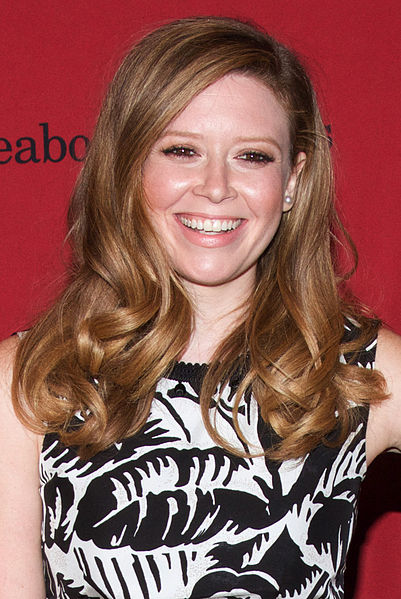 Natasha Bianca Lyonne Braunstein[1] (born April 4, 1979),[2] known professionally as Natasha Lyonne, is an American actress. She is best known for her role as Nicky Nichols on the Netflix series Orange Is the New Black (2013-present), for which she received an Emmy Award nomination in 2014, and for her role as Jessica in the American Pie film series (1999-2012).

Lyonne was born in New York City, the daughter of Ivette Buchinger[1] and Aaron Braunstein, a boxing promoter, race car driver, and radio host,[3] who was distantly related to cartoonist Al Jaffee.[1]

Lyonne's parents were both from Orthodox Jewish families, and she herself was raised Orthodox.[4][5][6] Her mother was born in Paris, France,[7] to Hungarian Jewish parents who were Holocaust survivors.[8][9][10][11][12] Lyonne has darkly joked that her family consists of "my father's side, Flatbush, and my mother's side, Auschwitz."[1] Her grandmother Ella[13] came from a large family, but only she and her two sisters and two brothers survived, which Lyonne credits to their blond hair and blue eyes.[1] Lyonne's grandfather, Morris Buchinger, operated a watch company in Los Angeles. During the war, he hid in Budapest as a non-Jew working in a leather factory.[1]

Lyonne spent the first eight years of her life living in Great Neck, New York.[8][14] She and her parents then moved to Israel, where Lyonne spent a year and a half. During her stay in Israel, Lyonne participated in the production of the Israeli children's film April Fool, which began her interest in being an actress.[4][15] Her parents divorced, and Lyonne and her older brother Adam returned to America with their mother.[8] After moving back to New York City, Lyonne attended The Rabbi Joseph H. Lookstein Upper School of Ramaz, a private Jewish school,[16] where Lyonne said she was a scholarship kid who took honors Talmud classes and read Aramaic. She was expelled for selling marijuana at school. Lyonne grew up on the Upper East Side, where she felt she was an outcast.[1] Her mother then moved their family to Miami, where Lyonne attended Miami Country Day School.[17][18] She never graduated high school; before her senior year, she left to attend a film program at NYU's Tisch School of the Arts. Her high school graduation depended on completing her first year at Tisch, but she left the program because she could not pay the tuition.[19]

She attended New York University for a short time, studying film and philosophy.[14]

Lyonne was estranged from her father, who lived on the Upper West Side until his death in October 2014[citation needed] and in 2013 was a Republican candidate for City Council for the sixth District of Manhattan.[3][20] Lyonne has said she is not close with her mother and has essentially lived independently of her family since age 16.[4]

As a young child, Lyonne was signed by the Ford Modeling Agency.[21] At the age of six, she was cast as Opal on Pee-wee's Playhouse, followed by film appearances in Heartburn, A Man Called Sarge, and Dennis the Menace. On working as a very young child actor, Lyonne said: "I didn’t have the best parents. I don’t think they are bad people. Even if they were ready to have children, it is kind of a wacky idea to put your child in business at six years old."[7]

Lyonne at a screening of The Immaculate Conception of Little Dizzle

At 16 years of age, Lyonne was cast in the Woody Allen-directed Everyone Says I Love You (1996). This led to appearances in a variety of films over the next 10 years, including starring roles in the independent features Slums of Beverly Hills (1998), for which she received two Teen Choice Award nominations,[22] and But I'm a Cheerleader (1999). During this time, she appeared as Jessica in the highly successful teen comedy American Pie (1999), reprising the role in three of its sequels. Lyonne's other films during this period included Detroit Rock City, Freeway II: Confessions of a Trickbaby (both 1999), Scary Movie 2, The Grey Zone, Kate & Leopold (all 2001), Party Monster (2003), and Blade: Trinity (2004).

Lyonne's subsequent film appearances include All About Evil (2010), 4:44 Last Day on Earth (2011), Girl Most Likely, Loitering with Intent, Sleeping with Other People, Hello My Name Is Doris, Addicted to Fresno, #Horror, Yoga Hosers, Antibirth, The Intervention, and Handsome: A Netflix Mystery Movie.

She was part of the original cast of the award-winning Love, Loss, and What I Wore, a play written by Nora Ephron and Delia Ephron, based on the book by Ilene Beckerman.[24]

In 2010, Lyonne received positive reviews for her performance in Kim Rosenstock's comedy, Tigers Be Still, at the Roundabout Theatre Company: "a thorough delight in the flat-out funniest role, the grief-crazed Grace, so deeply immersed in self-pity that she has cast aside any attempts at decorum".[25][26]

In 2011, Lyonne starred opposite Ethan Hawke and Ann Dowd in New Group's production of Tommy Nohilly's Blood From a Stone.[27][28] The following year, she participated in New Group's benefit performance of Women Behind Bars.[29]

On working in the theater: "There's something about theater that squashes the self-critical voices because you have to be in the moment. I'm glad that I didn't do this before I was ready, before I was capable of showing up every day. That is not a skill set I had before".[28]

Lyonne has made guest appearances on the series Weeds, New Girl, Will & Grace, and Law & Order: Special Victims Unit.

In late 2012, Lyonne was reported to be developing a TV series for Fox about a young girl, who, fresh out of rehab and committed to starting a new life as a sober, responsible adult, is forced to move in with her conservative brother and young family.[30] However, the project failed to come to fruition.

Since 2013, she has appeared as Nicky Nichols on the critically acclaimed Netflix series Orange Is the New Black. The role is Lyonne's first television job as a series regular.[31] She received a nomination for the Primetime Emmy Award for Outstanding Guest Actress in a Comedy Series in 2014,[32] and has twice been awarded the Screen Actors Guild Award for Outstanding Performance by an Ensemble in a Comedy Series, along with her co-stars.

When she was 18 years old, Lyonne used the paycheck from her work on Everyone Says I Love You to buy a small apartment near Gramercy Park.[8]

During the early 2000s, Lyonne experienced legal problems and was arrested for driving under the influence of alcohol,[35] and for incidents involving her neighbors.[36] In 2005, she was evicted by her landlord, actor Michael Rapaport, following complaints by other tenants about her behavior.[37]

In 2005, Lyonne was admitted to Beth Israel Medical Center in Manhattan under a pseudonym, suffering from hepatitis C, a heart infection, and a collapsed lung; she was also undergoing methadone treatment.[38] In January 2006, an arrest warrant was issued for her after she missed a court hearing relating to her prior problems. Her lawyer said an emergency had arisen, but did not give details. Later that year, Lyonne was admitted to the Caron Foundation, a drug and alcohol treatment center, and appeared in court afterwards. A judge sentenced her to conditional discharge.[4]

Lyonne underwent open heart surgery to correct damage caused by her heart infection. She recovered from the surgery, and discussed her past health problems on The Rosie Show in March 2012.[39]

She has been in a relationship with Saturday Night Live alum Fred Armisen since 2014.[40][41]

Report a problem
Write to Natasha Lyonne at FanPal • 2021