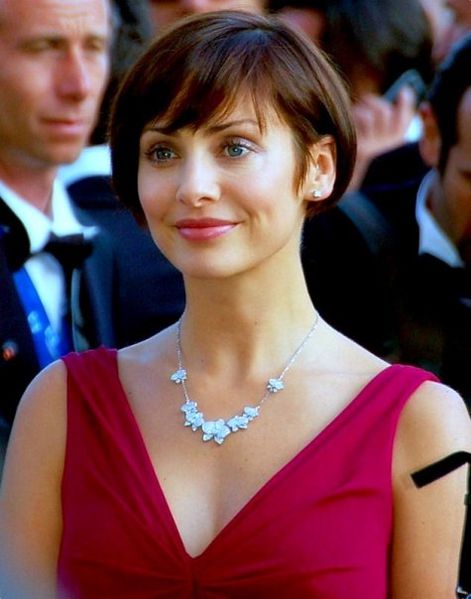 Natalie Jane Imbruglia (/ɪmˈbruːliə/ im-BROO-lee-ə, ; born 4 February 1975)[1] is an Australian singer-songwriter, model and actress, naturalised in the UK.[2] In the early 1990s, she played Beth Brennan in the Australian soap opera Neighbours. Three years after leaving the programme, she began a singing career with her successful hit cover of Ednaswap's song "Torn".[3]

In addition to her singing career, Imbruglia has appeared in several films, including 2003 film Johnny English and an Australian indie film, Closed for Winter (2009).[8][9] She has also modelled for several brands, such as L'Oreal, Gap, and Kailis.[10][11]

Since 2005, Imbruglia has been a spokesperson of Virgin Unite and campaigns to raise awareness of obstetric fistula.[12]

Imbruglia was born on 4 February 1975, in Sydney, Australia, second of four daughters of Maxene (née Anderson) and Elliot Imbruglia. Her father is of Italian descent (a Sicilian from Lipari who emigrated to Australia with his family at age 5) and her mother is of Irish and English descent.[13] Imbruglia grew up in Berkeley Vale, New South Wales and attended St Peters Catholic College, between Sydney and Newcastle. At 15, she moved to Sydney with her family[13] and studied ballet, tap and highland dancing, hoping to make a career of it.

Imbruglia appeared in Australian television commercials for Coca-Cola and the Australian snack Twisties. She left school at the age of 16, to pursue acting. She secured a role as Beth Brennan on the Australian soap opera Neighbours.[14] By the end of her second year, she left the show to move to London in 1994.[13] She met Anne Barret, who became her manager and convinced her to record a demo of four songs.[13] She signed a record deal with BMG, after a demo of "Torn" impressed RCA Records.

1997-2000: Left of the Middle and international breakthrough

Imbruglia's first international single, "Torn", was a cover of an Ednaswap song. It reached number two on the UK Singles Chart in November 1997,[15] number one on airplay around the world and number one on the Billboard Airplay chart for 14 weeks. It sold more than one million copies in the United Kingdom alone. As of 2011, 'Torn' was the most played song on Australian radio since 1990, played 300,500 times since 1998, an average of 75 a day, based on data compiled by the Australian Performing Rights Association (APRA).[16]

It was released as a radio single in the US, but not on CD. The single was on Billboard's Hot 100 Airplay chart for 14 weeks. At the time, singles not released commercially could not be on the overall Hot 100 chart (combined sales and airplay). By the time the policy changed in late 1998, "Torn" was heading down the charts, so its peak on the Hot 100 ended at 42. The single also topped the Top 40 Mainstream/CHR Pop and Adult Top 40 charts.

Rick Dees, in his Top 40 Chart show, named "Torn" as the 'number one radio single of 1990s' in the 2000 Millennium Countdown show broadcast from KIIS-FM on New Year's Eve.

Imbruglia appeared with David Armand midway through his 'interpretative dance' to sing Torn at Amnesty International's The Secret Policeman's Ball (2006).

Imbruglia's debut album Left of the Middle was released on 8 December 1997. It sold 350,000 in the UK three weeks after release and was certified platinum. It has sold 7 million copies and is the highest selling debut album by a pop/rock/alternative female artist, more than Alanis Morissette, Fiona Apple and Meredith Brooks combined in its first week according to Billboard. The second single in the UK after "Torn" was "Big Mistake", which debuted at number two. "Wishing I Was There" was less successful, reaching 19. Wishing I Was There" on UK radio peaked at 2 in summer 1998, and in the US peaked at 14 on the Top 40 Show. The final single from Left of the Middle was "Smoke", the reception more divided. It was a hit in the UK and made the top 5, while in Australia it missed the top 40. Eventually, the album became a million-seller after charting well in many countries and entering the Top 10 in the US and UK. In 1999, she recorded a cover of Never Tear Us Apart by INXS with Tom Jones which appeared on his album Reload.

She received an MTV Award for Best New Artist in 1998, and three constitutive Grammy nominations in 1999. That year, she won two Brit Awards for Best International Newcomer and Best International Female. She was ranked No. 11 on Rock of the Net's single artists of the year in 1998, and No. 76 in 2001. Imbruglia tied up her four-album deal with BMG after her compilation album, Glorious: The Singles 1997-2007.

Left of the Middle was certified platinum by RIAA within four weeks of release (3 April 1998) and was 2X platinum in November 1998.

Imbruglia's next album, White Lilies Island, in 2001, was named after where she lived beside the River Thames at Windsor. Imbruglia co-wrote every track over three years. The album's first single, "That Day", was stylistically different from her singles but did not reach the UK Top 10. In the US, "Wrong Impression" was the first single and charted in the Hot 100 Singles and adult contemporary charts. In the UK it did slightly better than That Day. "Beauty on the Fire", the final single, barely entered charts worldwide, and did not make the top 50 in Australia. The album, briefly notorious in the Sony BMG copy protection rootkit scandal, sold 1 million but did not repeat the success of Left of the Middle.

Imbruglia's third album was in November 2003. The record label refused to release it due to it being too rock and not radio-friendly. She was given songs to record with Swedish pop producers, Bloodshy & Avant, but refused. She and the record label separated at the beginning of 2004. Four months later she signed with Brightside Recordings, formed by a former Innocent Records executive, Hugh Goldsmith.

In April 2005, Imbruglia's third album Counting Down the Days had "Shiver" as its first single. "Shiver" became her longest running single in the UK since "Torn." It topped UK airplay charts for several weeks, reaching eighth in the UK. It became the most played song of 2005. Counting Down The Days became her first album to reach the top spot on the album charts.

"Sanctuary" was the second single from the album and singles sent to radio stations. The decision was later changed to the title track "Counting Down the Days", with stations asked to play the album version, because the radio mix was not finished. The single on 25 July did not have as much success in the singles chart as "Shiver," although it reignited interest in its album and received airplay in the UK. Due to the single, the album re-entered the top 40 in the UK charts.

Imbruglia made a small European tour (her first since Left of the Middle) in late October and November. Though the album never entered UK Top 40 again, several concerts, especially in London, sold out.

Imbruglia started on her fourth album in late 2005. In mid-2007 plans changed and her record company released a compilation of Imbruglia's 10 years in music. The only single from the album - "Glorious" premiered in BBC Radio 1 on the Chris Moyles Show. The Singles Collection debuted at 5 in the UK, including the single "Glorious" as well as a DVD of Imbruglia's videos. The album sold 600,000 copies.

Imbruglia in Bucharest, Romania, in 2008

Imbruglia parted with her label[18] and ended her association with Brightside Recordings. She obtained the rights to songs recorded for the album and planned to record on her own label, Malabar Records.[19] Songs on her first record were co-written with Ben Hillier, Dave McCracken, Daniel Johns, Gary Clark, Jamie Hartman, Paul Harris and Shep Solomon. Some tracks were produced by Hillier and mixed by Danton Supple, who collaborated on White Lilies Island.

According to The Sun, Imbruglia and Chris Martin of Coldplay collaborated on "a string of tracks likely to feature on her album".[20] Martin confirmed the information. In an interview he said he had asked Imbruglia to record one of the band's songs adding "we've given her the best Coldplay song of all time ... she sounds ... brilliant on it. I think she has a very unique talent and an incredibly unique voice."[21] She said she recorded two songs written by him saying "if Chris Martin calls with two songs, you don't think, you say, 'Yes'."[22] The songs were mixed by Michael Brauer Two songs - "My God" and "Apologise" - appeared on the Internet . The second was written with Jamie Hartman of Ben's Brother and will not be on her fourth album.[23] A version of "Apologise" by Ben's Brother was released instead in 2009 as the first single from their second album, Battling Giants. Tracks confirmed to be part of the album include "Fun", "Lukas", and "Want", which were mixed by Michael Brauer.[24] The music video for a pre-single track, "Wild About It", was filmed in London on 25 July 2009.[25]

The first single from Come to Life, "Want", was written by Imbruglia, Daniel Johns (credited Kat Kourtney), Gary Clark, and Chris Martin,[26] and released on 28 September 2009 had poor chart performances.[27] On 3 August 2009 the music video of "Wild About It" was released.

After Come to Life, Imbruglia moved to Los Angeles and hired acting coach Ivana Chubbuck. She appeared in three movies.[28] In April 2014 she made her stage debut in an adaptation of Alan Ayckbourn’s Things We Do For Love at the Theatre Royal, Bath.[29][30]

On 3 December 2014, Imbruglia signed with Sony Masterworks and planned to make her first album in five years, covering famous songs by a range of male artists.[31] The first single is a cover of "Instant Crush", originally by Daft Punk featuring Julian Casablancas. Male was released on 31 July 2015, her fifth studio album.[32][33] April-May 2017 she travelled Europe from East to West on the Acoustic Tour in support of the album.[34]

In May 2010, Imbruglia became a judge on the second season of the Australian version of The X Factor. She mentored the Under 25 Girls category, in which her final act Sally Chatfield was the runner up of the series. In 2011, she did not return for the third season and was replaced by Natalie Bassingthwaighte.[35]

In June that year, Imbruglia appeared on the original British version of the show, where she was a guest judge for the Birmingham auditions on its seventh series.

In 2016 Imbruglia was cast in the second season of SBS TV series First Contact.[36]

Natalie Imbruglia is the elder sister of singer-songwriter Laura Imbruglia.

Imbruglia was named the sixth most naturally beautiful woman of all time in 2004.[42] Audrey Hepburn topped the poll by fashion editors, model agents and make-up artists. She was 90th of the VH1 100 Sexiest Artists.[43]

Imbruglia has tattoos of Sanskrit/Hindi inscription "Shreya" on her neck, a Sanskrit word for auspicious or beautiful on her left foot and Sanskrit Aum on her lower back.

She said she had never had plastic surgery but that "I wouldn't rule it out because I don't know how I'll feel in the future." She said she would like to "grow old gracefully, wrinkles and all".[44]

Besides modelling for L'Oréal, Imbruglia also modelled Sass and Bide's "The Mad Ones" dress to raise money for cancer research.