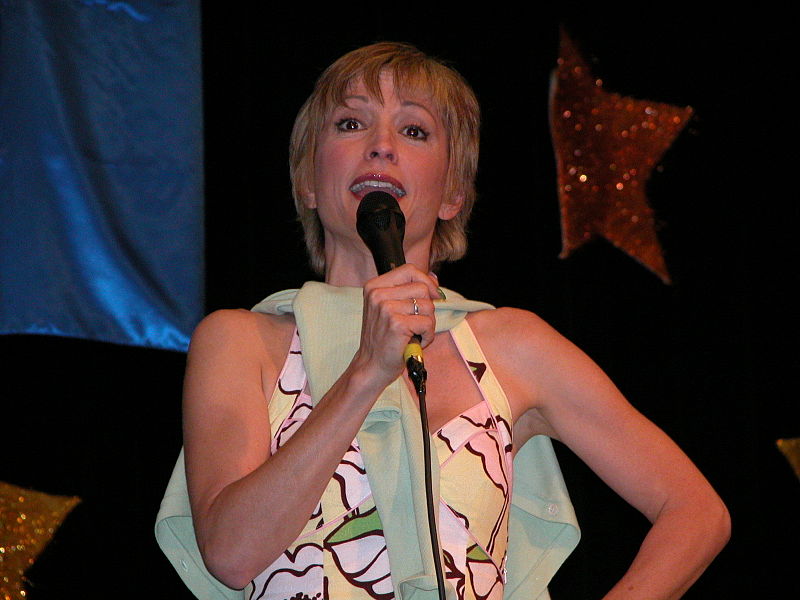 Nana Tucker was born July 26, 1957 in New York City,[2] the daughter of Nenette Charisse, a ballet teacher, and Robert Tucker, a choreographer; she is a niece of actress/dancer Cyd Charisse.[3]
Read more...

Visitor began her acting career in the 1970s on the Broadway stage in such productions as My One and Only.[4] Her film debut (billed by her birth name Nana Tucker) came in the 1977 horror film The Sentinel. On television, Visitor co-starred in the short-lived 1976 sitcom Ivan the Terrible, and from 1978 to 1982 had short-lived regular roles on three soap operas: Ryan's Hope, The Doctors and One Life to Live. She adopted the stage name "Nana Visitor" in the early 1980s.[5]

In 1987, Visitor appeared as Ellen Dolan in a failed television pilot for Will Eisner's pulp comic creation The Spirit starring Sam J. Jones as the title character and Garry Walberg as her father, Commissioner Dolan.

In 1990, Visitor co-starred with Sandra Bullock in the short-lived sitcom Working Girl, which was based on the feature film of the same name.

From 1993-1999, Visitor appeared on Star Trek: Deep Space Nine as Major (later Colonel) Kira Nerys, a former freedom fighter/terrorist from the planet Bajor, who fought against the occupation of her world by the Cardassians. After the occupation ended, she was appointed as first officer to the series' eponymous space station, built by the Cardassians and turned over to Starfleet management.

After DS9 ended, Visitor had a recurring role as villain Dr. Elizabeth Renfro on the television series Dark Angel and starred as Roxie Hart in the touring and Broadway companies of the musical Chicago.[6] Visitor was then cast as Jean Ritter on the ABC Family series Wildfire, which premiered on June 20, 2005.

In 2008, she appeared as Emily Kowalski, a dying cancer patient in "Faith", an episode of the re-imagined Battlestar Galactica's fourth season. Visitor had a small role as Pamela Voorhees in the 2009 version of Friday the 13th. She has also lent her voice in a few guest appearances on the sitcom Family Guy, such as Rita in the episode "Brian's Got a Brand New Bag" and as the voice of the Enterprise in "Extra Large Medium". In 2011, she had a small part in the Hammer Horror film The Resident playing the realtor. She appeared in Torchwood: Miracle Day episodes 7 ("Immortal Sins") and 8 ("End of the Road").[7] In 2012, she appeared as Dr. Patty Barker, a canine psychotherapist, in "An Embarrassment of Bitches", a season four episode of ABC's Castle.[8]

Visitor was married to Nick Miscusi from 1989 to 1994.[9] They have one child together.[10] Visitor began dating her Star Trek: Deep Space Nine co-star Alexander Siddig, and married him in June 1997. They divorced in April 2001.[11] They had a son together, and her pregnancy was incorporated into her character and the series storyline, beginning in the 1996 fourth season episode "Body Parts".[12][13] She gave birth to her son Django on September 16, 1996, during production of the episode "The Assignment", though her character would remain pregnant until the fifth season episode "The Begotten".[14] In early 2002, Visitor became engaged to Matthew Rimmer, company manager for the musical Chicago, and they wed in April 2003.[11]