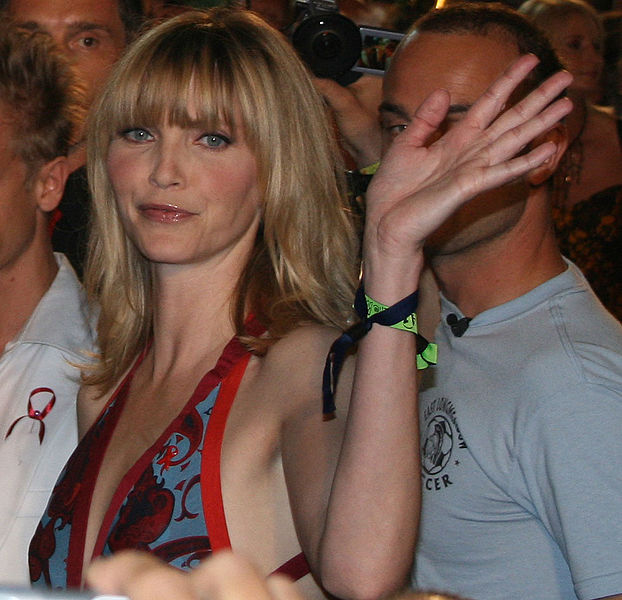 Nadja Auermann (born 19 March 1971) is a German supermodel and actress. Fashion designer Valentino once commented on her physical resemblance to Marlene Dietrich.[3] A New York Times fashion columnist, Guy Trebay, wrote of her "ice maiden visage and pole vaulter's legs".[4] She once held the record for being the model with the longest legs in the world in the Guinness Book of Records.[5][6]

In 1989, Auermann was discovered in a cafe in Berlin, which led her to sign with Karin Modeling Agency in Paris in the same year.[7] In 1991, she moved from Karin to Elite Model Management. She then had her picture taken for Vogue Paris, in addition to appearing in Benetton clothing advertisements. In September 1994, Auermann appeared on the cover of both Vogue and Harper's Bazaar, which The New York Times called "a triumph akin to winning two legs of the Triple Crown of Thoroughbred Racing".[8]

In 1997, she had her first child with Olaf Björn, a daughter called Cosima. Two years later, she married German actor Wolfram Grandezka. The couple welcomed their first son, Nicolas, the same year and divorced a few years later. Auermann gave birth to her third and fourth children with her partner in 2010 and 2013 respectively.[6]

In recent years, Auermann launched her own perfume ("Nadja Auermann") and has begun acting, having been in two German-language films: Letztes Kapitel (2005) and Dornröschens Leiser Tod (2004).

Auermann enjoys holidaying in the spa town of Heiligendamm, on Germany's Baltic coast.[10] She is a vegetarian.[11]

In an interview with the German Press, Auermann revealed that she was living with her children and partner in Dresden.[6]