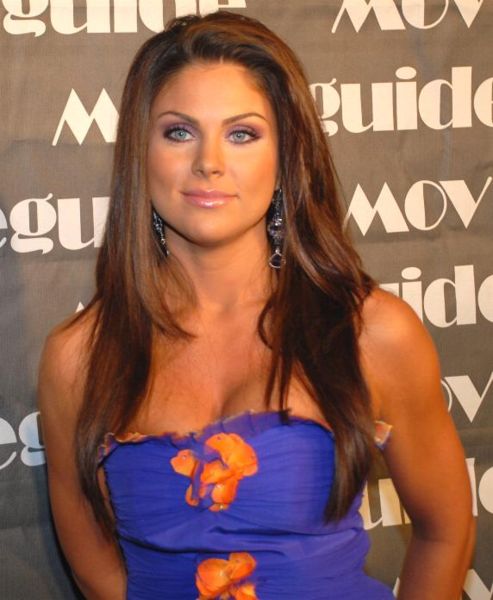 Björlin was born on August 2, 1980 in Newport, Rhode Island. She is the second eldest child of Swedish composer and conductor Ulf Björlin[1] and Fary Björlin (née Dadashi), an Iranian interior designer.[2][3][4]

Björlin is fluent in English, Swedish, and Farsi and is also schooled in French, Italian, and Russian. She has an older brother Ulf Alexander Jr. and a younger brother Jean-Paul. She also has an older half-brother Kaj, and two older half-sisters Katja and Kamilla, from her mother's first marriage.[citation needed]

Björlin's family moved to her father's native country of Sweden while she was still an infant. She has described her childhood as "wonderful" with "loving parents and siblings to lean on", although Björlin recalls being "oblivious" to racial tensions going on in Sweden. Although she never attended school there, a few of her siblings did and she remembers them talking about how they "experienced some torment" from classmates due to being half-Iranian. Being born after the Revolution of Iran, Björlin says she "grew up in a time where Iranians were looked down upon in places of the world".[5]

Björlin's family moved back and forth between the States and Sweden before she was seven years old. They moved a few times because of her father's work, living in Stockholm, Los Angeles and Palm Beach Florida. For her education, she attended the Interlochen Center for the Arts and the Boston University Tanglewood Institute, where she was honored for her excellence in theatre, voice, music and dance. Along with her brothers Ulf and Jean Paul, Björlin attended the Palm Beach County School of the Arts (now Dreyfoos School of the Arts) for her first 2 years of high school.[6] During her time there, Björlin sang with the Palm Beach Opera and in 1996, she competed in a large international vocal competition in Verona, Italy, where she was part of the choir who won the gold medal. While she was a junior in high school her family moved, this time to New York City. Björlin was able to attend the Professional Children's School, where she studied alongside other famous actors and actresses, including Julia Stiles, Gaby Hoffman, and Macaulay Culkin. In May 1999, Björlin won first place in the Metro Lyric Opera Competition, taking place in NYC. When she graduated from high school, she decided to shift her focus from singing to acting.[7]

Björlin's first major role was in April 1999 as Chloe Lane[8] on the soap opera Days of Our Lives.[1][9] In late 1999, she appeared as a go-go dancer in the music video for Ricky Martin's song Shake Your Bon-Bon.

Björlin left Days in June 2003 to concentrate on her singing career but returned later in December 2003. In September 2005, Björlin left Days of our Lives again and joined the cast of the UPN series Sex, Love & Secrets. The show was canceled by the network, but Björlin continued to make guest appearances on television series such as Jake in Progress and Out of Practice.

Björlin appeared in the 2007 independent feature film If I Had Known I Was a Genius, starring Markus Redmond, Whoopi Goldberg, Sharon Stone, and Tara Reid. The film was screened at the 2007 Sundance Film Festival.

Björlin was also cast as the female lead of the Chicago Pictures' feature film, Redline. The film starred Eddie Griffin and Nathan Phillips, and was released in theaters on April 13, 2007.

Björlin returned to Days of Our Lives as Chloe on November 29, 2007, and left the show again in September 2011 to pursue acting in films.[citation needed]

Since 2009, Björlin has starred as lesbian author Lara in the web series Venice: The Series.

In 2010, Björlin had a small role in NCIS as a suburban housewife wearing a bikini during a door-to-door canvasing by one of the NCIS investigators. That same year she guest starred on the CBS sitcom Two and a Half Men as Evelyn Harper's (Holland Taylor) lesbian lover, Jill.

In 2011, Björlin was one of the stars of the reality television series Dirty Soap[10] which gave viewers a behind-the-scenes view of Nadia's departure from Days of Our Lives, and afterward, including a bit of insight into the tenuous relationship between Nadia's live-in boyfriend and her mother who doesn't like him because she believes that he doesn't treat her well enough.

Björlin returned to her role on Days of Our Lives as Chloe for a two-episode stint on August 3, and 4, 2013, to commemorate the 50th anniversary of the daytime serial.[citation needed]

Björlin guest starred on 2 Broke Girls as the owner of a cat found by the girls in an episode aired on October 7, 2013.

Björlin dated Los Angeles radio personality Frank Kramer around 2000 or 2001; Kramer would often refer to her on his show as "Tuesday". She also dated Bruce Willis around 2001-2002. Björlin was once engaged to subprime lending tycoon Daniel Sadek, who produced her film Redline. Bjorlin had been in a relationship with actor Brandon Beemer for seven years until 2013.[11]

Björlin is good friends with her former Days of Our Lives co-star Farah Fath.[15]

Björlin's father Ulf Bjorlin died in 1993 at age 60 due to Leukemia.[citation needed] Since then, Björlin has been involved in several charities and fundraisers to help raise awareness and money for research on this type of cancer. She has even formed her own team; Nadia's Cancer Crusaders to help find a cure for this disease. On June 15, 2013, Björlin and her then-boyfriend Brandon Beemer participated in and hosted the Leukemia & Lymphoma Society's annual "Light the Night" walk at the Skirball Cultural Center in Los Angeles, California with the goal of raising $500,000 for Leukemia research and to help people fight the disease. On October 5, 2013, Björlin again participated in the "Light the Night" at Sunset Gower Studios in Hollywood.[16][17][18]

Apart from singing and acting, Björlin is also a musician and plays the flute, harp, guitar, and piano.[2] She also has a couple of pet birds, and a puppy named Tiger.[citation needed]