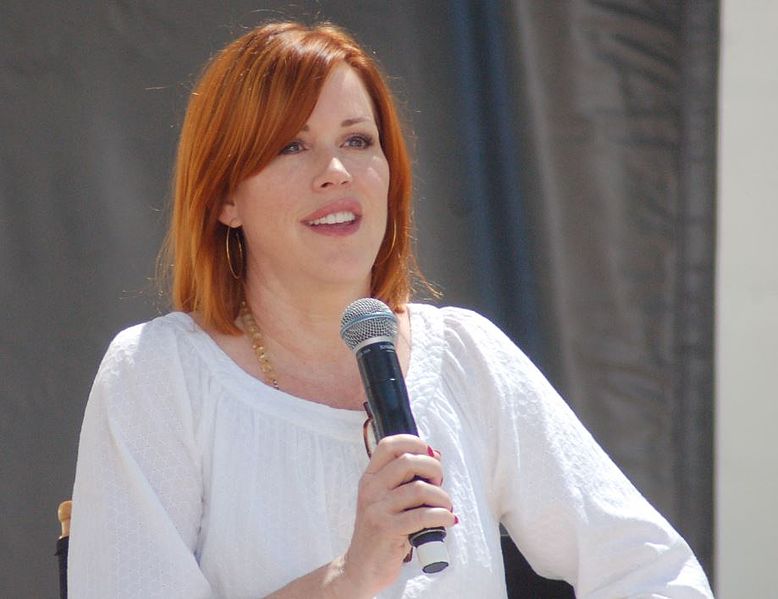 Molly Kathleen Ringwald (born February 18, 1968)[1] is an American actress, singer, and author. She was cast in her first major role as Molly in the NBC sitcom The Facts of Life (1979-80) after a casting director saw her playing an orphan in a stage production of the musical Annie. She and several other members of the original Facts of Life cast were let go when the show was reworked by the network. She subsequently made her motion picture debut in the independent film Tempest (1982), which earned her a Golden Globe nomination for New Star of the Year.

Ringwald is known for her collaborations with filmmaker John Hughes, having appeared in three of his films.

Ringwald was born in Roseville, California, a city northeast of Sacramento,[1][5] the daughter of Adele Edith (née Frembd), a housewife and chef, and Robert Scott "Bob" Ringwald, a blind jazz pianist.[6] Ringwald has two siblings, Beth and Kelly, and an older brother who died before she was born.[7] She started her acting career at age five, appearing in a stage production of Alice Through the Looking Glass as the Dormouse. The next year, she recorded "I Wanna Be Loved by You", a music album of Dixieland jazz with her father and his group, the Fulton Street Jazz Band.[8]
Read more...

In 1978, at the age of 10, Ringwald was chosen to play Kate in the West Coast production of Annie, performing in Los Angeles.[9]

In 1979, Ringwald appeared on the TV series Diff'rent Strokes and was selected to become part of a very large cast of that show's spin-off The Facts of Life. She played Molly Parker, a perky, feminist student at Eastland Girls School. At the beginning of the second season, the show underwent a major revamp and most of the cast, including Ringwald, were cut from the show. Ringwald later said that Nancy McKeon replaced her to play a new character named Jo.[10]

In 1980, Ringwald performed as a lead vocalist on two Disney albums. On the patriotic album Yankee Doodle Mickey, Ringwald sang "This Is My Country", "The Star-Spangled Banner" and "God Bless America". She later performed one track, "The First Noel", on a Disney Christmas album, "Disney's Merry Christmas Carols."

Turning toward motion pictures, she got a key supporting role in the 1982 film Tempest, directed by Paul Mazursky with top casting director Juliet Taylor,[11] and was subsequently nominated for a Golden Globe award for the role.[12]

Ringwald rose to prominence with her breakout role in Sixteen Candles (1984). She was cast as Samantha Baker, a girl whose sixteenth birthday is forgotten. Ringwald's performance gained critical acclaim; many called her acting engaging.[13] Ringwald would later say, "It is not a good idea to do remakes of great classic films" when asked if there would be a remake to Sixteen Candles.[14] Ringwald was regarded as a member of the so-called Brat Pack of 1980s teen actors[15] but has said she was not really part of that group.[16] Ringwald gained more success when she was cast in another John Hughes film, The Breakfast Club (1985), which was a commercial and critical success. Ringwald was cast as Claire Standish, a spoiled, rich, so-called sophisticate who is in detention for skipping class to go shopping. Ringwald's performance gained strong reviews.

The following year, she was cast as Andie Walsh in another successful Hughes film, Pretty In Pink (1986). Ringwald's role as Andie went on to become one of her most recognizable performances. When first asked to be in Pretty in Pink, Ringwald was reluctant, but after seeing how hard it was for the producers to find a replacement for her, she decided she would portray Andie in the film. Ringwald was offered a role in another John Hughes film, Some Kind of Wonderful (1987), but turned down the role as she felt it was too similar to the other films she worked on with Hughes. After Pretty In Pink, Ringwald planned to star in more mature roles. Ringwald was later featured on the cover of the May 26, 1986 issue of Time magazine.[17]

Ringwald was set to star in another Hughes film, Oil and Vinegar, but the film was scrapped when Hughes refused to rewrite the script. The film would have been about a soon-to-be-married man and a hitchhiking girl talking about their lives during the length of a car ride.[18][19]

In 1987, she was cast as Randy Jensen in The Pick-up Artist, opposite Robert Downey, Jr. in one of his first lead roles.[20] It focused on a womanizer who meets his match when he falls for a woman in debt to the Mafia. The Pick-up Artist was met with mixed reviews while being a moderate commercial success.

The following year she starred in For Keeps, a commercial success that received mixed reviews from critics but was well received by audiences. It is considered Ringwald's final teen movie. Ringwald portrayed Darcy Elliot, the editor at her high school paper, who becomes pregnant by her long-term boyfriend Stan, portrayed by Randall Batinkoff. Her performance received positive reviews. The film was praised by some critics for showing the struggles of teen pregnancy. She was later cast in Fresh Horses. The film was met with generally negative reviews and underperformed at the box office. The film also starred Andrew McCarthy, who previously worked with Ringwald in Pretty in Pink.[21]

In the early 1990s, Ringwald reportedly turned down the female lead roles in Pretty Woman and Ghost.[22] In the mid-1990s, Ringwald, who had been educated at the Lycée Français de Los Angeles and is fluent in French, moved to Paris and starred in several French movies.[23] She returned to the United States intermittently to appear in American movies and television. In 1990, Ringwald appeared in the James Scott-directed Strike It Rich alongside Robert Lindsay and John Gielgud. That same year she starred in Betsy's Wedding as Betsy Hopper. This film gained generally mixed reviews despite being a commercial success. Ringwald later starred in Something to Live for: The Alison Gertz Story (1992).

In 1994, she was cast as Frannie Goldsmith, in the TV adaptation of Stephen King's The Stand. Ringwald's performance was generally well received. She next played the leading role in the film Malicious (1995) as Melissa Nelson, a disturbed woman who has an affair with a college star baseball player. She later starred in the ABC sitcom Townies. She also made one appearance as a blind woman on the critically acclaimed cable series Remember WENN. She starred with Lara Flynn Boyle and Teri Hatcher in the 1998 made-for-television film Since You've Been Gone. In 1999, she played the starring role of "Li'l Bit" in Paula Vogel's play How I Learned to Drive at the Mark Taper Forum in Los Angeles. In 2000, she appeared in an episode of Showtime's The Outer Limits, "Judgment Day."

In 2000, Ringwald appeared in the ensemble restaurant-themed film In the Weeds, and in 2001 she had a cameo in the commercially successful Not Another Teen Movie that earned her an MTV Movie Award nomination. In theater, she wore a "Green, Green Dress" in Jonathan Larson's Off-Broadway musical tick, tick... BOOM!,[24] and headlined as Sally Bowles in Broadway's long-running revival of Cabaret from December 18, 2001 until April 28, 2002.[25] In 2003 Ringwald appeared in Enchanted April on Broadway beginning April 8, but left after the June 15 performance due to pregnancy.[26]

In late 2004, she starred in the play Modern Orthodox on Broadway, opposite Jason Biggs and Craig Bierko.[27] In 2006 she starred in the television film The Wives He Forgot, and that fall and winter starred as Charity Hope Valentine in the national tour of the Broadway revival of the musical Sweet Charity.[28] She also played a supporting role as Molly McIntire's mother Helen in Molly: An American Girl on the Home Front.[29] Ringwald starred in the ABC Family network's series The Secret Life of the American Teenager, which debuted on July 1, 2008,[30] playing the title teenager's mother. Ringwald read the audiobook edition of the 2012 novel The Middlesteins by Jami Attenberg.

2013-present: Except Sometimes and Riverdale

In early 2013, Ringwald released Except Sometimes, a jazz record. It follows a tradition in jazz for the Ringwald family set by her father. "I grew up in a home filled with music and had an early appreciation of jazz since my dad was a jazz musician. Beginning at around age three I started singing with his band and jazz music has continued to be one of my three passions along with acting and writing. I like to say jazz music is my musical equivalent of comfort food. It's always where I go back to when I want to feel grounded," Ringwald said in a statement.[31]

In September 2014, Ringwald began writing an advice column for The Guardian, answering questions about "love, family, or life in general".[34] In 2016, she was cast as Amy in the crime-drama film King Cobra. Ringwald currently has a recurring role as Mary Andrews on The CW television series Riverdale.

Ringwald was married to Valéry Lameignère, a French writer, in Bordeaux, France, on July 28, 1999; they divorced in 2002.[35] She married Panio Gianopoulos, a Greek-American writer and book editor, in 2007. They have a daughter, Mathilda Ereni Gianopoulos (born 2003), and twins, Adele and Roman (born 2009). Her pregnancy was written into the storyline of The Secret Life of the American Teenager.[36]

Ringwald has stated that she was very aware of her public image during her teen years and that she tried to be a good role model for her fans. When asked about For Keeps (1988), Ringwald said, "I didn't want to give the wrong message to teenagers. I sort of felt a certain responsibility - I mean, I was a very, very famous teenager and I thought a lot of teenagers were looking up to me and emulating me, and I really didn't want to make a movie that said in any way that having a baby at that age was going to be easy."[37]