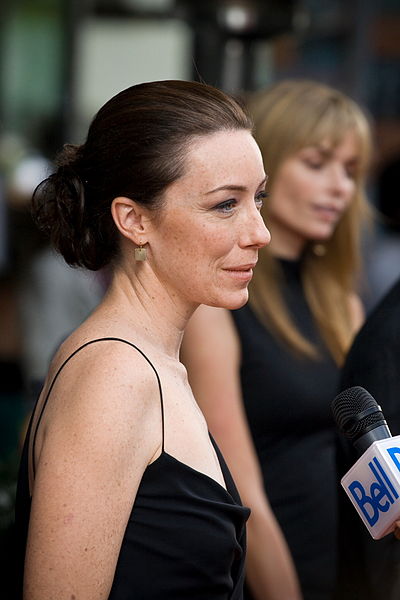 Molly Parker (born June 30, 1972) is a Canadian actress. She is best known for her roles in independent films, and for her roles in television as House Majority Whip Jacqueline Sharp on the Netflix original series House of Cards, for which she earned an Emmy nomination, and as Alma Garret on the HBO series Deadwood. She won a Genie Award in 1997 as Best Actress in a Leading Role for Kissed, was nominated for an Independent Spirit Award as best female lead in 2001 for her role in The Center of the World, and has twice been nominated for a Genie Award as best supporting actress (she won in 2002 for Last Wedding).

Parker was born in Maple Ridge, British Columbia (near Vancouver), and spent her childhood on a farm in Pitt Meadows.[1] She attended ballet classes from ages 3 to 17 but began acting in local productions at age 14. Her uncle's agent represented her early in her career, when she had parts in various Canadian television roles before studying with Vancouver's Gastown Actors' Studio.[2]
Read more...

Parker portrayed Alice Ramsey in "The Wrath of Kali" (1995), a fourth-season episode of Highlander: The Series. Her breakthrough role[citation needed] was as the daughter of a lesbian military officer in the television movie Serving in Silence (1995). She also appeared in the 1995 Lifetime television movie Ebbie playing the niece (and sister) of Susan Lucci's Scrooge character. She then won a Gemini Award nomination for her performance in the television movie Paris or Somewhere[citation needed] and later, the Genie Award for best actress for playing a necrophiliac in Lynne Stopkewich's film Kissed (1996).

Parker is known for taking on controversial roles, such as her performance in Kissed, her role as a sympathetic lap dancer and paid escort in The Center of the World (2001), and a rabbi in Six Feet Under. From 2004-06 she starred in HBO's Deadwood, reprising her role in the series' upcoming film continuation.

In 2012, Parker joined the cast of the television series The Firm, based on John Grisham's eponymous 1991 novel and its 1993 film adaptation; she portrayed Abby McDeere, wife of Mitch McDeere (portrayed by Josh Lucas).[3] She also made several appearances on the sixth season of the Showtime series Dexter.

In 2014, she appeared as Congresswoman Jacqueline Sharp in the second season of the Netflix series House of Cards. Parker continued in the role in seasons 3 and 4.

One of her most recent projects involves a role alongside Jamie Dornan, Sarah Gadon, and Aaron Paul in Miramax's supernatural thriller The 9th Life of Louis Drax (2016), which started principal photography in October 2014.[4] Also in 2016, Parker co-starred in the Amazon Studios legal series Goliath.

She co-starred in Josephine Decker’s 2018 feature film, Madeline’s Madeline.[5] She appears as Maureen Robinson in Lost in Space, the Netflix remake of the 1965 TV series.[6][7]

Parker is divorced from director, writer, and producer Matt Bissonnette.[8] They have a son.[9]

Report a problem
Write to Molly Parker at FanPal • 2020