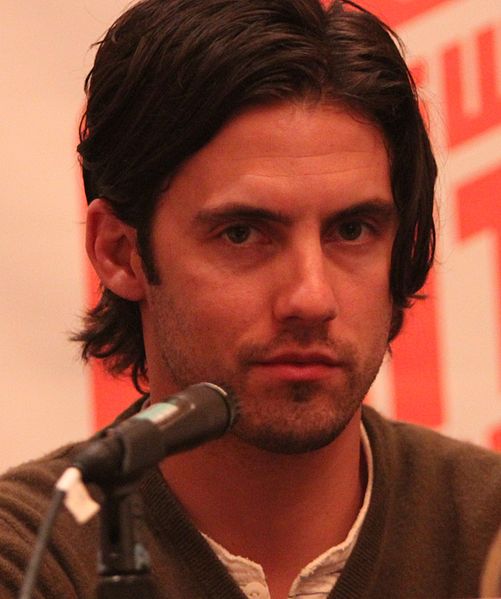 Milo Anthony Ventimiglia (/vɛntɪˈmiːljə/; born July 8, 1977) is an American actor. After a series of roles in television series and parts in independent films, he gained international recognition for his roles as Jess Mariano on the television series Gilmore Girls from 2002 to 2006, and as Peter Petrelli on the NBC series Heroes from 2006 to 2010. He currently stars as Jack Pearson on the NBC drama This Is Us.

Ventimiglia made his debut as party guest #1 on The Fresh Prince of Bel-Air (1995), eventually being cast in the short-lived Fox series Opposite Sex in 2000. His later roles include Richard Thorne on The WB's The Bedford Diaries, Jake Provesserio on Boston Public, a recurring role as Meg Pryor's love interest on NBC's American Dreams, and Rocky Balboa's son (Rocky Jr.) in the sixth installment of the Rocky series, Rocky Balboa (2006). He starred as Peter Petrelli on NBC's Heroes from 2006 to 2010, for which he received nominations for Teen Choice, Saturn and People's Choice Awards. He also had roles in the horror films Pathology (2008) and Kiss of the Damned (2013).

Ventimiglia later appeared in television as Ian Mitchell on the Crackle original series Chosen as well as Sean Bennigan on The Whispers in 2015. He reprised his role as Jess Mariano on Netflix's reunion miniseries, Gilmore Girls: A Year in the Life (2016), and currently stars as Jack Pearson on NBC's This Is Us (2016-present). For his role as Jack Pearson, Ventimiglia has received two nominations for the Primetime Emmy Award for Outstanding Lead Actor in a Drama Series. As part of the This Is Us cast, he went on to win a Screen Actors Guild Award for Outstanding Performance by an Ensemble in a Drama Series in January 2018.

Ventimiglia was born July 8, 1977[1] in Anaheim, California, the youngest child of Carol (née Wilson) and Peter Ventimiglia,[2] a Vietnam War veteran.[3] He has two older sisters, Leslie and Laurel.[1][4] His father is of Italian-Sicilian descent and his mother is of English and Scottish ancestry.[5] Ventimiglia was born with a self-described "crooked mouth" that is the result of damaged nerves on the left side, which cause that side to remain immobile, much like actor Sylvester Stallone, with whom he worked in Rocky Balboa.[2]

Ventimiglia attended El Modena High School in Orange, California, where he wrestled, acted in drama productions and held the office of president in student government. He graduated in 1995. At eighteen years of age, Ventimiglia studied at the American Conservatory Theater for their summer program.[6] He attended the University of California, Los Angeles as a theatre major.[7]

At eighteen, Ventimiglia began pursuing an acting career. His first starring role was as a gay teenager in Must Be the Music, a short film released as part of Strand Releasing's Boys Life 2.[8] After, he enrolled at UCLA before landing a role on The Fresh Prince of Bel Air. He has guest starred on such television series as CSI: Crime Scene Investigation, Sabrina, the Teenage Witch, Law and Order: Special Victims Unit and Boston Public. He had the part of the main character, Jed Perry, in the short-lived Fox TV series, Opposite Sex, which originally aired in 2000.[9]

Ventimiglia at the season three premiere of Heroes, 2008.

From 2002 to 2004, Ventimiglia played brooding teen Jess Mariano on Gilmore Girls; he was introduced in the second season as a main cast member. He signed on for a spin-off of Gilmore Girls called Windward Circle which was to be focused on the relationship between Jess and his estranged father (played by Rob Estes), but the proposed series never made it to air.[10] Afterward he dropped down to a guest star/recurring cast member, and he came back for four episodes in season four and two episodes in season six. In the third and final season of American Dreams, Ventimiglia played Chris Pierce, the rebellious boyfriend of Meg Pryor (Brittany Snow);[11] Pierce and his single mother, Shelly (Daphne Zuniga), a Playboy bunny, move into the house next to the Pryors. In 2005, he starred in the mid-season replacement series The Bedford Diaries. The producers had only Ventimiglia in mind but the show lasted only eight episodes and was one of several shows not picked up by the newly formed network The CW.

In between television work, Ventimiglia had supporting roles in the horror films Cursed (2005), directed by Wes Craven, and Stay Alive (2006), as well as starring roles in the short-film Intelligence and the full-length feature Dirty Deeds (2005). The same year, he was cast as Robert "Rocky Jr." Balboa, the son of Rocky Balboa, in the sixth Rocky installment Rocky Balboa which was released in December 2006.[12]

He starred as Peter Petrelli in the NBC program Heroes, a show about "ordinary" people discovering they have superpowers, and portrayed the character until the series' conclusion in 2010. Ventimiglia also produced and developed a mini web-series called It's a Mall World as part of a marketing campaign for American Eagle Outfitters in 2007.[13] In mid-2007 he starred as the love interest of pop/R&B singer Fergie in the music video for "Big Girls Don't Cry". In 2008, he starred as a medical student in the horror film Pathology. The movie co-starred Charmed actress Alyssa Milano and was directed by Marc Schölermann for MGM.[14]

In 2005, Divide Pictures created the DSC, or Divide Social Club, an online and global social network for like-minded people[15] co-founded by Ventimiglia with his best friends Russ Cundiff and Dino DeMilio, a radio producer for The Tom Leykis Show. Ventimiglia, Cundiff, and Divide Pictures partnered with Top Cow to produce the comic series REST which will be a monthly limited series. The comic is about John Barrett, a white-collar New Yorker whose life changes when he becomes addicted to a drug that prevents him from falling asleep. Divide also has a comic book called Berserker written by Rick Loverd.[16]

Film and television; This Is Us

After working with writers Mark Neveldine and Brian Taylor on Pathology, Ventimiglia appeared in the pair's next film, Gamer.[17] Ventimiglia also starred in the Xavier Gens apocalypse thriller film, The Divide.[18]

Ventimiglia was the voice of Wolverine in the English dub of the Marvel Anime: Wolverine anime series and reprised his role in an episode of the Marvel Anime: Iron Man and an episode of Marvel Anime: Blade. He did not return to voice Wolverine in Marvel Anime: X-Men, due to that series portraying an older Wolverine, instead Wolverine was voiced by Steven Blum.[19] He played Ned Stax, a former marine, in Frank Darabont's short-lived neo-noir crime drama Mob City for TNT.[20] He also reprised his role as Jess Mariano in Gilmore Girls: A Year in the Life in November 2016. After this, he reportedly told USA Today that, "I hear rumors that they're bringing back everything that I've ever been a part of... I think it's exciting. At times, though, I think it's too much. There are more stories to tell with a lot of these characters, but at the same time some of these characters for some of us actors are more than a decade in the past. It was exciting going back to Gilmore Girls for the four Netflix movies, but I'm satisfied with it(.) I think the stories were told. I think it was great for the audience and fans to get just one small taste of that world again. But, at the same time, I think people should not get so greedy."[21]

Beginning in the fall of 2016, Ventimiglia starred opposite Mandy Moore in the critically acclaimed[22] NBC period drama series This Is Us playing Jack Pearson, the patriarch of a middle-class family in late 1980s early 1990s America.[23] Ventimiglia stars in the upcoming suspense thriller Devil’s Gate, alongside Amanda Schull.[24] For his role as Jack Pearson, Ventimiglia received his first Emmy nomination in the category Outstanding Lead Actor in a Drama Series.[25]

Ventimiglia has said in interviews that both he and his sisters were raised as lacto-vegetarians by his parents, and that he has maintained the diet as an adult.[29] He was named People for the Ethical Treatment of Animals' Sexiest Vegetarian in 2009.[30][31] He also does not smoke cigarettes or drink alcohol.[30] He is a fan of The Clash.[32]

Ventimiglia took a United Service Organization tour from July 6 to 12, 2008 in support of American troops in Kuwait, Iraq and Afghanistan.[33]