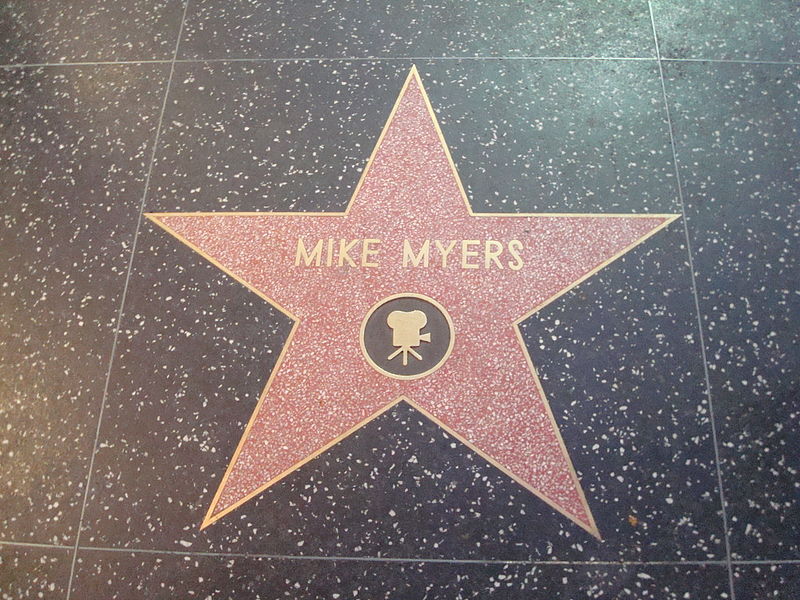 Michael John Myers OC (born May 25, 1963) is a Canadian-American actor, comedian, screenwriter, and film producer.[1] He is known for his run as a performer on Saturday Night Live from 1989 to 1995, and for playing the title roles in the Wayne's World, Austin Powers, and Shrek films. He made his directorial debut with the documentary Supermensch: The Legend of Shep Gordon (2013) and had a small role in Quentin Tarantino's Inglourious Basterds (2009).

Both of his parents were from Liverpool, United Kingdom, and he has two older brothers, Paul, an indie rock singer-songwriter, broadcaster, and author, and Peter, who worked for Sears Canada.[4]

The family is of English, Scottish, and Irish ancestry. Myers was raised Protestant.[5] He reportedly holds Canadian, U.S., and British citizenship.[1]

After graduating from high school, Myers was accepted into the Second City Canadian touring company. He later moved to the United Kingdom, where in 1985 he was one of the founding members of The Comedy Store Players, an improvisational group based at The Comedy Store in London.

The next year, he starred in the British children's TV program Wide Awake Club, parodying the show's normal exuberance with his own "Sound Asleep Club", in partnership with Neil Mullarkey.

He returned to Toronto and Second City in 1986 as a cast member in the Second City's Toronto main stage show, Second City Theatre.[7] In 1988, he moved from Second City in Toronto to Chicago. In Chicago, he trained, performed, and taught at the Improv Olympic.

Myers made many appearances, including as Wayne Campbell, on Toronto's Citytv in the early 1980s, on the alternative video show City Limits hosted by Christopher Ward. Myers also appeared as Wayne Campbell in the music video for Ward's Canadian hit "Boys and Girls".

The Wayne Campbell character was featured extensively in the 1986 summer series It's Only Rock & Roll, produced by Toronto's Insight Production Company for CBC Television. Wayne appeared both in studio and in a series of location sketches directed and edited by Allan Novak. Myers wrote another sketch, "Kurt and Dieter", co-starring with Second City's Dana Andersen and also directed by Novak, which would later turn into the popular "Sprockets" sketch on Saturday Night Live.

Myers made his film debut when he and Dana Carvey adapted their Wayne's World SNL sketches into the feature Wayne's World (1992). It was among the most successful movies of the year and was followed in 1993 by Wayne's World 2; Myers starred in So I Married an Axe Murderer the same year. He took a two-year hiatus from performing after the end of his time as an SNL regular.

Myers returned to acting with the film Austin Powers: International Man of Mystery (1997), followed by the sequels Austin Powers: The Spy Who Shagged Me (1999) and Austin Powers in Goldmember (2002). Myers played the title role (Austin Powers) and the villain (Dr. Evil), as well as other characters, in all three films.

One of Myers' rare non-comedic roles came in the film 54 (1998), in which he portrayed Steve Rubell, proprietor of New York City's famous 1970s discotheque Studio 54. The film was not critically or commercially successful, though Myers received some positive notice.[8][9] He later parodied the club as "Studio 69" in Goldmember.

In June 2000, Myers was sued by Universal Pictures for US$3.8 million for backing out of a contract to play Dieter, the SNL character, in a feature film. Myers said he refused to honor the US$20 million contract because he did not want to cheat moviegoers with an unacceptable script—one that he himself had written. Myers countersued, and a settlement was reached after several months where Myers agreed to make another film with Universal. That film was The Cat in the Hat, which was released in November 2003 and starred Myers as the title character.[10][11][12]

In 2001, Myers provided the voice of Shrek in the DreamWorks animated film of the same name, having taken over the role after original planned voice actor Chris Farley died in December 1997. He reprised this role in Shrek 4-D (a theme park ride) in 2003, Shrek 2 (2004), Shrek the Third (2007), and the Christmas special Shrek the Halls (2007).

Myers received the MTV Generation Award in June 2007, making him the second Canadian to win the award (following Jim Carrey in 2006).[13]

In 2008, Myers co-wrote, co-produced, and starred in The Love Guru. In 2009, he played the part of British general Ed Fenech, in Quentin Tarantino's Inglourious Basterds. In 2010 Myers returned for the latest film in the Shrek series, Shrek Forever After.

In a 2005 poll to find The Comedian's Comedian, he was voted among the top 50 comedy acts ever by fellow comedians and comedy insiders.[17]

Myers is a member of the band Ming Tea along with The Bangles' guitarist and vocalist Susanna Hoffs and musician Matthew Sweet. They performed the songs "BBC" and "Daddy Wasn't There" from the Austin Powers movies.[18]

Myers' 2013 directorial debut, Supermensch: The Legend of Shep Gordon, was selected to be screened in the Gala Presentation section at the 2013 Toronto International Film Festival.[20] In 2017, Myers began hosting a reprised version of The Gong Show in heavy makeup as a fictional British host known as Tommy Maitland.[21]

Myers began dating actress and comedy writer Robin Ruzan in the late 1980s after meeting at a hockey game in Chicago, during which Myers caught a puck and used the incident as an icebreaker to strike up a conversation with Ruzan. The couple married on May 22, 1993, and Myers later referred to Ruzan as "his muse".[22][23] The couple filed for divorce in December 2005.[24]

During a CBS interview in 2007, he noted that he normally takes three years between films. He spends one year "living his life" and then writes various screenplays, develops characters, practices them in front of live audiences, and then selects one of the screenplays to film.[citation needed]

Myers has played for Hollywood United F.C., a celebrity soccer team.[32] He played in the 2010 Soccer Aid for UNICEF UK football match, England vs. R.O.W (Rest of the World) and scored his penalty during a sudden death shootout after the game ended 2-2 (June 6, 2010). The Rest of the World team beat England for the first time since the tournament started. Myers is a fan of Liverpool F.C.[33]

In 2014, Myers starred in a commercial with his brother Peter for Sears Canada, using "humorous banter to spread the message that, despite rumours, Sears wasn't shutting down". Peter at the time was senior director of planning at Sears head office in Toronto, and he was laid off in 2017 after Sears Canada filed for bankruptcy.[4]

In 2016 Myers published a book, Canada, about the country's history and popular culture.[7]

Myers is also a member of the Canadian charity Artists Against Racism.[34]

Myers' star on the Hollywood Walk of Fame

For contributions to the motion picture industry, Mike Myers was honoured with a star on the Hollywood Walk of Fame at 7042 Hollywood Boulevard.[36]

On June 30, 2017, he was named an Officer of the Order of Canada by Governor General David Johnston for "his extensive and acclaimed body of comedic work as an actor, writer and producer."[38]