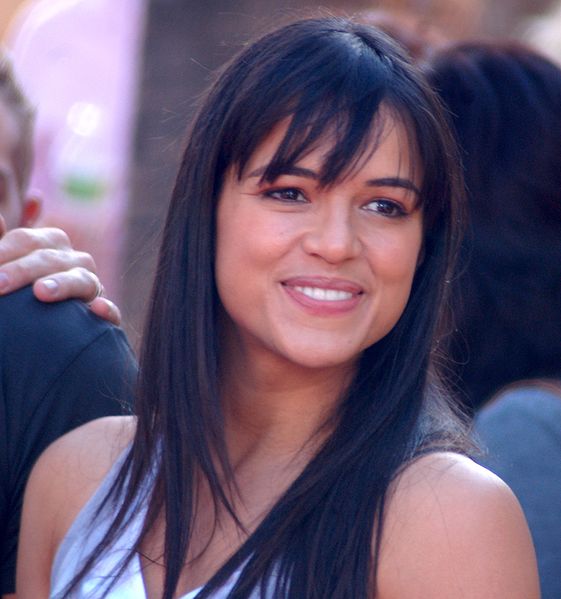 Mayte Michelle Rodriguez[1] (born July 12, 1978)[2][3] is an American actress. Her breakout role was as a troubled boxer in the independent film Girlfight (2000), which was met with critical acclaim and earned her several awards, including the Independent Spirit Award[4] and Gotham Award for Best Debut Performance.[5] The following year, she starred as Letty Ortiz in the blockbuster film The Fast and the Furious (2001), a role she has reprised in five additional films in the Fast & Furious franchise. During her career, Rodriguez has played in a number of successful action films, including Resident Evil, S.W.A.T., and Avatar.

Rodriguez also branched into television, playing Ana Lucia Cortez in the second season of the television series Lost. She has also had numerous voice work appearances in video games such as Call of Duty and Halo, and lent her voice for the 3D animated film Turbo and the television series IGPX.[6] With her films grossing over $5 billion (U.S.) collectively, a 2013 Entertainment Weekly article described Rodriguez as "arguably the most iconic actress in the action genre, as well as one of the most visible Latinas in Hollywood".[7]

Rodriguez was born in San Antonio, Texas.[8][3] Her mother, Carmen Milady Rodriguez (née Pared Espinal),[a] is Dominican, and her father, Rafael Rodriguez, was a Puerto Rican, who served in the U.S. Army.[9][3][10] Rodriguez moved to the Dominican Republic with her mother when she was eight years old and lived there until age 11. Later, she moved to Puerto Rico until the age of 17, and finally settled in Jersey City, New Jersey. She dropped out of high school, but later earned her GED.[11] In total, she was expelled from five schools.[12] She briefly attended business school before quitting to pursue a career in acting, with the ultimate goal of becoming a screenwriter and director.[13]

Rodriguez has 10 siblings and half-siblings. She was partly raised by her devoutly religious maternal grandmother, and was brought up as a Jehovah's Witness (her mother's religion), although she has since abandoned the faith.[14][15] A DNA test of Rodriguez, performed by the television program Finding Your Roots, found that her ancestry is 72.4% European, 21.3% African, and 6.3% Native American.[16] She also stated on the show that there was some racial conflict between her families, since her Puerto Rican father had a light complexion and her Dominican mother had a dark complexion.

Having run across an ad for an open casting call and attending her first audition, Rodriguez beat 350 other applicants to win her first role in the low-budget 2000 independent film Girlfight. With her performance as Diana Guzman, a troubled teen who decides to channel her aggression by training to become a boxer,[17] Rodriguez accumulated several awards and nominations for the role in independent circles, including major acting accolades from the National Board of Review, Deauville Film Festival,[18] Independent Spirit Awards,[4] Gotham Awards,[5] Las Vegas Film Critics Sierra Awards, and many others. The film itself took home a top prize at the Sundance[19] and won Award of the Youth at the Cannes Film Festival.

Rodriguez has had notable roles in other successful movies, including Letty in The Fast and the Furious (2001) and Rain Ocampo in Resident Evil (2002). She also appeared in Blue Crush and S.W.A.T..[20] In 2004, Rodriguez lent her voice to the video game Halo 2, playing a Marine.[21] She also provided the voice of Liz Ricarro in the Cartoon Network series IGPX.[6] From 2005 to 2006, she played tough cop Ana Lucia Cortez[22] on the television series Lost during the show's second season (the character's first appearance was a flashback during the first season's finale, "Exodus: Part 1"), and returned for a cameo in the second episode of the show's fifth season, "The Lie", in 2009. She returned again in the penultimate episode of the series, "What They Died For", in 2010. In 2006, Rodriguez was featured in her own episode of G4's show Icons.[23]

In 2008, Rodriguez appeared in the political drama Battle in Seattle opposite Charlize Theron and Woody Harrelson.[24] In 2009, she appeared in Fast & Furious, the fourth installment of The Fast and the Furious film series.[25][26] Later that year, Rodriguez starred in James Cameron's high-budget sci-fi adventure epic Avatar, which became the highest-grossing film in history and Rodriguez's most successful film to date. In 2009, Rodriguez also starred in Trópico de Sangre, an independent film based on the Dominican Republic's historic Mirabal sisters.[27][28]

From left to right, Rodriguez, Jonathan Liebesman and Aaron Eckhart at the 2010 San Diego Comic-Con International

In 2010, Rodriguez appeared in Robert Rodriguez's Machete.[29] In 2011, she appeared with Aaron Eckhart in the science fiction film Battle: Los Angeles which grossed over US$200 million in the worldwide box office. In 2012, she returned to play the good clone and bad clone of Rain Ocampo in Resident Evil: Retribution. In 2013, she reprised her roles as Letty in Fast & Furious 6 and Luz / Shé in the Robert Rodriguez sequel Machete Kills. She also voiced a character in DreamWorks Animation's Turbo.[30]

In 2015, she appeared in Furious 7 which grossed over $1.5 billion worldwide.[31] In 2016 she starred in The Assignment alongside Sigourney Weaver. In 2017, she lent her voice to Smurfs: The Lost Village. She also starred in The Fate of the Furious, which broke records for the largest global box office opening of all-time.[32] She'll next be reunited with director James Cameron for Alita: Battle Angel and star opposite Viola Davis in Widows from award-winning director Steve McQueen.[33][34]

As of 2013, Rodriguez stated she was working on several projects including a family adventure film, a drug drama, and a female-oriented period piece.[35]

In early 2000, Rodriguez broke off an engagement to a Muslim boyfriend, citing opposition to religious requests he made of her.[39] She has since reportedly dated actors Vin Diesel,[40] Olivier Martinez[41] and Zac Efron, and model Cara Delevingne.[42]

In 2013, Entertainment Weekly quoted her saying: "I've gone both ways. I do as I please. I am too curious to sit here and not try when I can. Men are intriguing. So are chicks."[7]

As she explained to Latina magazine: "I'm getting older. Eventually it's going to wrinkle up and I'm not going to be able to use it. I wanted to be honest about who I am and see what happens."[43]

The following year, she said in an interview that she hoped her actions would help others in a similar situation: "Maybe by me opening my big fat mouth like I usually do and stepping up and owning who I am, maybe it might inspire somebody else to do the same."[44] She described herself as bisexual in another interview later that month: "Bi, yeah, I fall under the B category of LGBT". Regarding the lack of unconventional female roles available in films, she said: "What's wrong with being bi? I mean, we're getting flak everywhere we go."[45]

In March 2002, Rodriguez was arrested for assault after getting into a fight with her roommate. The charges were later dropped, after the roommate declined to press the allegations in court.[46]

In November 2003, Rodriguez went to court to face eight misdemeanor charges based on two driving incidents, including a hit and run and driving under the influence (DUI).[47] In June 2004, Rodriguez pleaded no contest in Los Angeles to three of the charges: hit and run, drunken driving, and driving with a suspended license.[48] She went to jail for 48 hours, performed community service at the morgues of two New York hospitals, completed a three-month alcohol program, and was placed on probation for three years.[49]

In 2005, while filming Lost in Hawaii, Rodriguez was pulled over by Honolulu police multiple times for speeding violations, and on December 1 was arrested for DUI.[50][51] In April 2006, she pleaded guilty to one charge of driving under the influence, and chose to pay a US$500 fine and spend five days in jail.[48]

She cited her high doses of allergy-relieving steroids as part of the reason for her erratic behavior.[52] Because the incident was a violation of her Los Angeles probation, she was sentenced to 60 days in jail, a 30-day alcohol rehabilitation program, and another 30 days of community service, including work for Mothers Against Drunk Driving.[53] Because of overcrowding, she was released from jail on the same day she entered.

In September 2007, Rodriguez allegedly violated her probation by neither completing her community service nor following an alcohol education program. Her lawyer claimed it was a clerical error.[54] On October 10, 2007, following a hearing, she was sentenced to 180 days' jail time after agreeing to admit to violating her probation. She was expected to spend the full 180-day term in jail but was released 18 days later due to overcrowding.[55] In January 2009, Rodriguez completed her community service.[56]