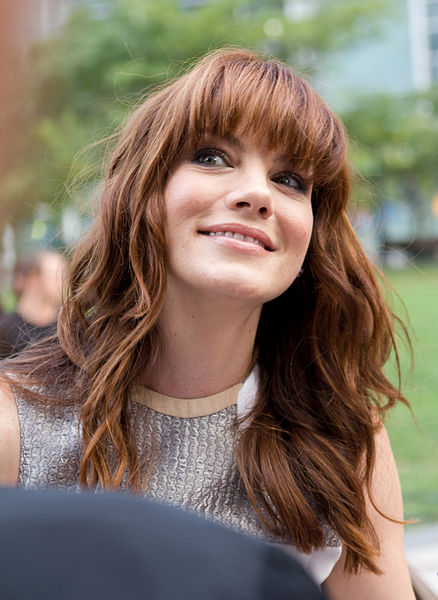 On television, Monaghan starred as Maggie Hart in the first season of the anthology crime drama series True Detective (2014), for which she received a nomination for the Golden Globe Award for Best Supporting Actress. She also starred as Sarah Lane in the drama series The Path (2016-18).

Monaghan was born in Winthrop, Iowa, the daughter of Sharon (née Hammel),[2] who ran a day care center in the family's home for forty years,[3] and Robert Monaghan, a factory worker.[4][5] She has two older brothers, Bob and John.[6] Monaghan has Irish and German ancestry, and was raised Catholic.[7][8][9]

She graduated from East Buchanan High School in 1994,[5] where she was class president and acted in several plays.[10] After graduation, she moved to Chicago to study journalism at Columbia College Chicago and began to model.[11] She modeled in Milan, Singapore, Tokyo and Hong Kong, as well as in the United States. With one semester remaining to complete her journalism degree in 1999, she left for New York to pursue an acting career, where she appeared as a model in several magazines and catalogs before making her acting debut.[12]

Monaghan's first two credited television appearances, in a supporting role, were as "Caroline Busse" in episodes of Young Americans, which aired in 2000.[13] She also performed on Law & Order: Special Victims Unit in "Consent", an episode that was broadcast on January 19, 2001; and she made her "big screen" debut that same year in the film Perfume, playing the part of "Henrietta".[14][15] Her next film, again in a supporting role, was in 2002 in Unfaithful, starring Richard Gere and Diane Lane.[16]

Monaghan got a big-break role in 2002 when she co-starred in the television series Boston Public playing the role of Kimberly Woods. After guest-starring for a season, she returned to film, appearing in It Runs in the Family in 2003, Winter Solstice and The Bourne Supremacy both in 2004, and starring with Robert Downey Jr. and Val Kilmer in Kiss Kiss Bang Bang in 2005. She also appears in Constantine in 2005, but her role in that film was essentially cut, with her scenes viewable on the DVD under "deleted scenes."

The following are awards for which Monaghan was nominated, or won.[25]