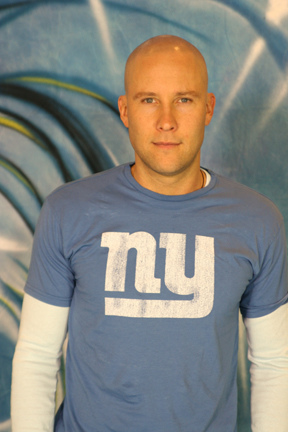 Michael Owen Rosenbaum (born July 11, 1972) is an American actor, producer, and comedian. He is known for his performance in Sorority Boys and for portraying Lex Luthor on the Superman television series Smallville, a role that TV Guide included in their 2013 list of The 60 Nastiest Villains of All Time.[1]

Rosenbaum is also known for portraying Dutch Nilbog on FOX's Breaking In, and voiceover work in animation, such as his role of Wally West / The Flash in the DC animated universe. Between 2015 and 2016, he played the lead role in the TV Land comedy series Impastor.

Rosenbaum was born in Oceanside, New York and raised in Newburgh, Indiana.[2] His mother, Julie (née Eckstein), is a writer who published the book "Journey of a Lifetime," and has acted in many plays. His father, Mark Rosenbaum, used to work in pharmaceuticals.[3] He is one of six children with two brothers, Eric and Adam, and a sister, Laurie. After his parents' divorce, his mother remarried sports reporter Gordon Engelhardt, and his father remarried Alexis Peregrino, a starting performer, with whom he had two daughters, Rosenbaum's half-sisters Ava and Lia. His uncle is pet behaviorist Warren Eckstein.[4] Rosenbaum is Jewish, and says he was "closer to religion" in New York than in Indiana.[5]

He graduated from Castle High School in Indiana and from Western Kentucky University in Bowling Green, Kentucky, where he was a member of Sigma Alpha Epsilon fraternity, with a degree in theatre arts. Immediately after, he moved to New York City to pursue an acting career.[citation needed]

Once in New York, Vincent Letizia, an MTV Networks intern spotted his 8 x 10 black-and-white photo in a batch of other casting submissions for a pilot called "Talk Girl". The pilot was never green-lighted, but Rosenbaum stood out as a newly discovered talent. A new MTV pilot was conceived specifically for Rosenbaum with the working title of The Michael Rosenbaum Project. The project later became known as "The Temp" and covered Rosenbaum in a reality television setting as a temp, who would walk into a different job each day. The pilot featured Rosenbaum as a Cat filling in on Broadway's "Cats" musical, and as a zoo keeper filling in at the zoo, sweeping animal manure and the like. The pilot never took off with MTV Executives.

In 2001, Rosenbaum received a Saturn Award for his portrayal of Lex Luthor on Smallville. Continuing in the superhero genre, he played Wally West (a.k.a. The Flash) in the DC Comics animated series Justice League, Static Shock, and Justice League Unlimited as well as portraying a younger version of Wally West as Kid Flash in Teen Titans. In the third season Justice League Unlimited episode "Great Brain Robbery", Rosenbaum reprised his role as Lex Luthor when his character was trapped in Clancy Brown's Lex Luthor's body. In February 2008, Rosenbaum confirmed that he would be leaving Smallville after the seventh season of the show. After many months of speculation and him first turning down the contract to return, it was announced on February 11, 2011 that Rosenbaum would return to Smallville for the two-hour series finale, which aired on May 13, 2011,[6] with Rosenbaum reprising his role as Lex Luthor.[7]

Rosenbaum has a few notable vocal impressions in his repertoire, including Christopher Walken, Keanu Reeves, and Kevin Spacey. The makers of the DCAU have used these impressions in their work, having Rosenbaum do his Walken voice for Ghoul in Batman Beyond: Return of the Joker and his Spacey voice for Deadshot; Spacey coincidentally portrayed Lex Luthor in the film Superman Returns, and Walken played Max Shreck in Batman Returns. He filmed the original SyFy comedy series Saved By Zeroes; yet was never picked up.[8][9] He recurred in Fox's original sitcom Breaking In; the show gets cancelled initially after the first season but got a second chance, and Rosenbaum was promoted to series regular. Yet the series was cancelled again after a few episodes of the second season.[10][11]

In 2014, Rosenbaum made his feature film directorial and writing debut with the comedy Back in the Day, where he stars as an actor who returns to his hometown in Indiana for a class reunion. The movie was filmed in Newburgh and Evansville, Indiana.[12][13]

Prior to the production of Back in the Day, Rosenbaum planned to direct another comedy film, titled Sorry is For Sissies. The film had a cast including Jon Heder, Colin Hanks and Jennifer Love Hewitt, however, at least half of the film's budget was lost, therefore the film was scrapped.[14]

On June 17, 2014, Rosenbaum was cast as the lead in the TV Land original sitcom Impastor. The plot has been summarised as a "low-life who hides out in a small town by conning the residents into thinking he is their newly hired gay pastor".[15]

In 2017, Rosenbaum served as narrator for the reality television show Hunted which pitted investigators against teams of ordinary citizens trying to evade capture as fugitives.[16]

Rosenbaum at the Jules Verne Adventures Film Festival in 2007

Report a problem
Write to Michael Rosenbaum at FanPal • 2021