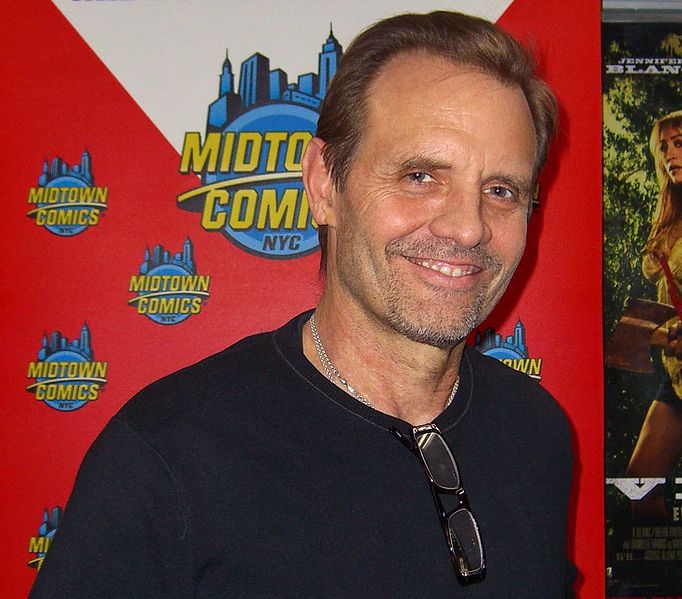 Biehn was born in Anniston, Alabama, the second of three children of Marcia (née Connell) and Don Biehn, a lawyer.[1][2] He is partially of German descent.[3] When he was young, he moved with his family to Lincoln, Nebraska, and then to Lake Havasu City, Arizona, where he was a member of the high school drama club before graduating.[2] He attended the drama program at the University of Arizona,[1] where he was a member of the Sigma Nu Fraternity before moving to Hollywood.[4]
Read more...

Biehn got his start in movies with a bit part in the film version of Grease in 1978. He appears in two scenes, in one which John Travolta's character, Danny, hits Biehn's uncredited character in the stomach while playing basketball. In 1981, he acted out the title role of Douglas Breen, a stalker, in the 1981 film version of Bob Randall's novel The Fan; at the time the film was shot, he was in his mid-20s, whereas the actress chosen as Breen's victim Sally Ross, Lauren Bacall, was more than 30 years his senior. After a few more films, Biehn played Sgt. Kyle Reese, a soldier sent back in time by John Connor to save his mother, Sarah Connor, in the 1984 film The Terminator. He starred in two other films directed by James Cameron: Aliens (as Corporal Hicks) and The Abyss (as Lieutenant Hiram Coffey), and had a small role in Terminator 2: Judgment Day, briefly reprising role as Reese in a scene cut from the final film but restored for the Director's Cut version. He was considered to portray the film's antagonist, the T-1000, but the role ultimately went to Robert Patrick.

In an early draft of Alien 3 written by William Gibson, Biehn's character Hicks (who had survived the events of Aliens) was to become the protagonist, replacing Ellen Ripley (Sigourney Weaver).[5] However, Walter Hill and David Giler penned the final script, which had Hicks killed off in the opening scene. Biehn, upon learning of his character's demise, demanded and received almost as much money for the use of his likeness in one scene as he had been paid for his role in Aliens.[6] Biehn reprised the role of Hicks by voicing the character in the video game Aliens: Colonial Marines. Biehn played the role of Johnny Ringo in Tombstone with the showdown scene with Val Kilmer as Doc Holiday.

In the 2000s, Biehn took acting roles ranging from big budget films such as The Art of War and Clockstoppers, to video games like Command & Conquer: Tiberian Sun, and independent movies, such as Havoc. He also starred in three TV series including the CBS drama The Magnificent Seven (1998-2000), the Tribune Entertainment syndicated TV series Adventure Inc. (2002-2003), and the NBC TV series Hawaii (2004). All three shows were subsequently cancelled because of low ratings. Biehn was considered for a role in James Cameron's science fiction epic film Avatar (2009), but Cameron felt his appearance in the film coupled with that of Sigourney Weaver's would remind people too much of Aliens.[7]

Biehn and his then-girlfriend, actress Jennifer Blanc, in 2012, promoting The Victim, which they co-produced, and which Biehn starred in and directed

Report a problem
Write to Michael Biehn at FanPal • 2021