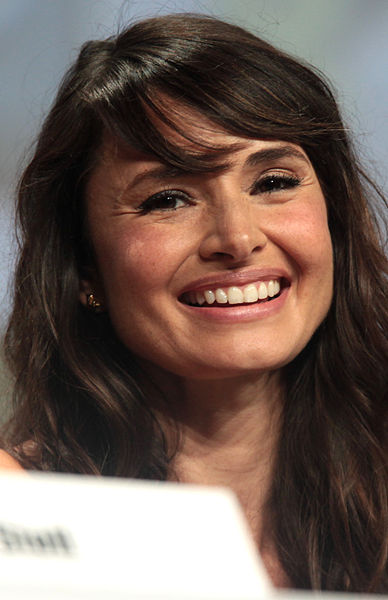 Mía Maestro (born June 19, 1978) is an Argentine actress and singer-songwriter. She is known for her role as Nora Martinez in The Strain, Nadia Santos in the television drama Alias, as Christina Kahlo in Frida, and as Carmen in The Twilight Saga.

Maestro was born in Buenos Aires, Argentina in 1978.[1] She made her screen debut in Carlos Saura’s Tango, which received Golden Globe and Academy Award nominations for Best Foreign Film. Initially trained in Argentina, Maestro traveled to Berlin to develop a vocal repertoire of the works of Kurt Weill and Hanns Eisler. Her first proper acting turn was in the play The Summer Trilogy by Carlo Goldoni, and by 1998, she secured the coveted role of Lulu in Frank Wedekind’s Pandora’s Box at the San Martin Theater in her hometown of Buenos Aires. For this she garnered an "Ace" Award for Best New Artist of the Year.

In 2004, she joined the cast of ABC’s critically acclaimed series Alias for two seasons. In the same year, Maestro also appeared in the Argentine film La Niña Santa (aka The Holy Girl), directed by Lucrecia Martel, as well as the Focus Features film The Motorcycle Diaries, (Golden Globe nominee in 2005 for Best Foreign Film) based on the journals of Che Guevara, leader of the Cuban Revolution. The film was directed by Walter Salles (Central Station), and stars Gael García Bernal and Rodrigo de la Serna. Maestro has starred as a victim of a kidnapping in Venezuela in Jonathan Jakubowicz’s thriller Secuestro Express, released by Miramax. In December 2005, she starred in Prince's music video for "Te Amo Corazón", which was directed by her friend Salma Hayek.[2]

In 2006, she co-starred in Wolfgang Petersen's film Poseidon, a remake of the 1972 film of the same name. She played Elena Gonzalaz, a stowaway girl going to meet her sick brother in the hospital with friend and waiter Valentine.

Maestro starred in the off-Broadway musical play, My Life as a Fairytale, inspired by the life and works of author Hans Christian Andersen and singing the music of Stephin Merritt from The Magnetic Fields. She also starred in Cosí, based on the opera Così fan tutte by Mozart, the comedy Meant to Be, and the American indie film Mr. Tambourine Man based on an Oliver Sacks story.

Maestro guest-starred in White Collar as Maya, a restaurant owner with whom Neal Caffrey (Matt Bomer) has a fling while on the run.

She played Dr. Nora Martinez in the vampire horror series The Strain, created by Guillermo del Toro. She also guest starred in the NBC television series Hannibal in 2015, playing the role of Allegra Pazzi, the wife of an Italian inspector.[5] In 2017, she returned to theater and played the role of Diana Salazar in Ferdinand von Schirach's Terror. The play was produced in multiple countries, an adapted version of the play was gotten its United States premiere in a production by Miami New Drama at Miami Beach’s Colony Theatre.

As a singer-songwriter, Maestro has been performing in Los Angeles, New York City, and Buenos Aires, and is in preparation to start recording her EP followed by an album. In 2010, she performed in Iceland where she opened for Emiliana Torrini during several shows at the Háskólabíó theater in Reykjavík. She has collaborated with the UK band Faithless singing on the song 'Love is My Condition' on their album The Dance, released in May 2010.

She won an ACE Award for her performance in the stage production of Pandora's Box.[1]