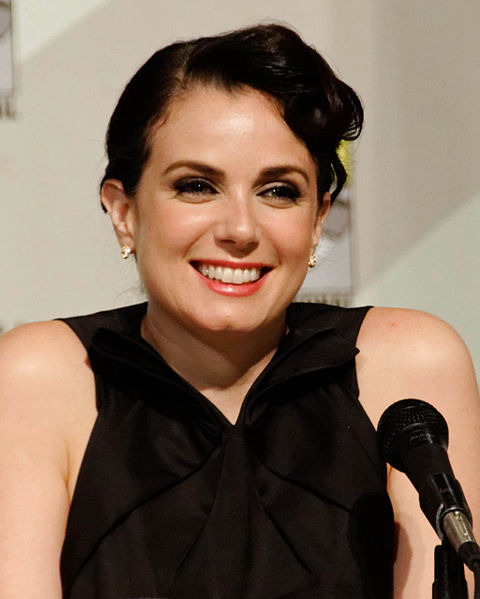 Kirshner was born in Toronto, Ontario, the daughter of Etti, a teacher, and Sheldon Kirshner, a journalist who wrote for The Canadian Jewish News.[3][4] Kirshner is a granddaughter of Holocaust survivors;[5] her father was born in a displaced persons camp in Germany in 1946, and met Kirshner's mother, a Bulgarian Jewish refugee, after they escaped to Israel.[5] Kirshner's paternal grandparents were Jews from Poland.[6][7] Kirshner had a middle class upbringing[8] and attended Forest Hill Collegiate Institute but later graduated from the Jarvis Collegiate Institute. Kirshner studied Russian literature and 20th-century movie industry at McGill University in Montreal. Her younger sister, Lauren Kirshner, a writer, was involved in the I Live Here project.[9]
Read more...

Kirshner also appeared in the first three episodes of 24 as the assassin Mandy in 2001. She would later reprise the role for the second season's finale and in the latter half of the show's fourth season.[citation needed] Also in 2001, Kirshner played Catherine Wyler, The Cruelest Girl in School, in Not Another Teen Movie. The character is primarily a spoof of Kathryn Merteuil (played by Sarah Michelle Gellar) in Cruel Intentions, and was partially based on Mackenzie Siler (played by Anna Paquin) from She's All That. In Marilyn Manson's music video for "Tainted Love", which was featured on the movie's soundtrack, she made a cameo appearance as her character Catherine Wyler.

In 2004, Kirshner was cast as author Jenny Schecter, a main character in the drama series The L Word. She remained with the show for all of the show's six seasons through 2009.[11]

In 2006, she starred in Brian De Palma's The Black Dahlia in which she plays the young aspiring actress Elizabeth Short, whose mutilation and murder in 1947 remains unsolved. While the film itself was critically panned, many reviews singled out her performance for acclaim.[12][13][14][15] Stephanie Zacharek of Salon.com, in a largely negative review, notes that the eponymous character was "played wonderfully by Mia Kirshner..."[12] Mick LaSalle wrote that Kirshner "makes a real impression of the Dahlia as a sad, lonely dreamer, a pathetic figure."[13] J. R. Jones described her performance as "haunting" and that the film's fictional screen tests "deliver the emotional darkness so lacking in the rest of the movie."[14] In 2010, Kirshner co-starred in the film 30 Days of Night: Dark Days which began filming in the fall of 2009.[16] In 2010, she was cast as Isobel Flemming, a guest role on The Vampire Diaries.[11]

In 2011, she voiced the title character in Bear 71, a National Film Board of Canada web documentary that premiered at the Sundance Film Festival.[17][18]

On April 20, 2012, it was announced that Kirshner would join the new Syfy series Defiance.[19]

On October 9, 2013, it was mentioned on the Showcase blog that Kirshner would be one of several guest stars in season four of the television series Lost Girl.[20]

In October 2008, after seven years in production,[21] Kirshner published the book I Live Here,[22] which she co-produced with ex-Adbusters staffers Paul Shoebridge and Michael Simons,[23] as well as writer James MacKinnon. In the book, four different groups of women and children refugees from places such as Chechnya, Juárez, Burma and Malawi tell their life stories. The book features original material from well-known comic and graphic artists including Joe Sacco and Phoebe Gloeckner. It was published in the U.S. by Random House/Pantheon. It was supported logistically by Amnesty International, which will receive proceeds from the book. After the release of the book, the Center for International Studies at MIT invited Kirshner to run a 4-week course on I Live Here in January 2009.[24]

Kirshner was ranked #43 on the Maxim Hot 100 Women of 2002.[25] She and Beverly Polcyn were nominated for Best Kiss at the 2002 MTV Movie Awards for Not Another Teen Movie.[26] In 2011 it was announced that Kirshner would be the face of Monica Rich Kosann's jewelry collection.

Kirshner in September 2009, during interview