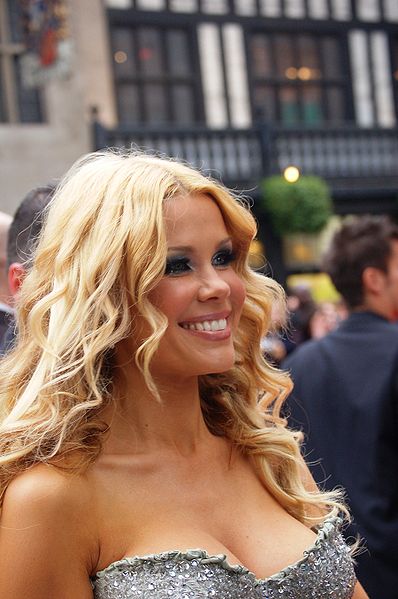 Melinda Jane Messenger (born 23 February 1971) is an English television presenter and former glamour model and Page 3 girl. She presented the magazine programme Live from Studio Five and was formerly the co-presenter of the reality show Cowboy Builders.

Messenger was born in Swindon, Wiltshire, the middle child between two brothers, Brian and Warren. Her parents, Terry and Avis, divorced when she was five years old.[1] After attending different schools, one of which was Dorcan Technology College, she spent six months working as a flight attendant for Britannia Airways. She then joined a local marketing company, rising to become customer services manager, overseeing a staff count of fifty employees.[citation needed]
Read more...

Deciding she wanted to become a model,[2] Messenger was advised by her agent at the Jason Paul Modelling Agency to enhance her breasts, which she enlarged to a 34DD cup.[3] She then took a job modelling for a Gloucester based double glazing company, dressed only in knickers and a bra.[4] After being put up as part of an advertising campaign with the slogan "Class Behind Glass", the posters quickly began disappearing from bus stops, having been taken by locals. After a complaint at the lack of clothes on Messenger, the Advertising Standards Authority banned the campaign, claiming they were not sufficiently "classy".[2]

After local newspapers picked up on the story, the Daily Star ran the story on 28 January 1997 as a photo-shoot of Messenger,[4] under the headline, "Move Over Eva Herzigova".[2] Soon after Messenger shot to fame, her mother Avis publicly denounced her for her career choice. The two became estranged, only reconciling in 2000 after the birth of Messenger's first son.[1] Later in 1997 she won Rear of the Year.

Signed by modelling agent Yvonne Paul, who had earlier steered Samantha Fox to fame in the 1980s,[3] Messenger's career began to take off. Posing for artistes including Vivienne Westwood, she then appeared on The Sun newspaper's Page Three, and they later hailed her as the "Girl of the Thrillenium!".[1] Her work for the newspaper entailed visiting the Spanish costas, as well as visits to English seaside resorts, an assignment known as "Mel's Big Bus Tour".[2] She continued working for The Sun until readers voted to ban models with breast implants.

Messenger appeared in a cameo role in 1999's Virtual Sexuality as Superbra Girl, and costarred in the 2000 cult film The Mumbo Jumbo in the role of Princess Vanilla. She worked on Channel 4 cult show Eurotrash and became a popular pantomime actress, taking on roles such as Cinderella (2004-2005) and Aladdin (with Bobby Davro and John Rhys-Davies; Woking - 2005-2006).

Motherhood and becoming a presenter

Following the birth of her first child Morgan on 7 April 2000, which was by emergency caesarian section after she collapsed with pre-eclampsia,[5] Messenger then concentrated on developing her career as a television presenter.

Messenger released the "Back Into Shape Workout" DVD after the birth of her first child. It was a six-week fitness programme designed to get mothers back into shape after the birth of their baby. She appeared on "Noel Edmonds - Gotcha!" in which she was one of the subjects to receive the treatment from Noel and his team.

Messenger had her own issue of ‘At Home With…” magazine called 'At Home With Melinda Messenger", which was aimed at parents. She joined with chef Antony Worrall Thompson in May 2008 for the recipe book “The Sweet Life”, in which she contributed some recipes.

From 1998 to 2001, Messenger became assistant in Fort Boyard on Five which ran for four series on the channel. She joined ex-Eastender Leslie Grantham and Catweazle star Geoffrey Bayldon in the game show which tested contestants' physical agility and brainpower on the identically named sea fortress in France.[3]

In 2002, she appeared on Celebrity Big Brother where she was described as a "blonde Vulcan" by fellow contestant Sue Perkins, who questioned her apparent lack of range of emotions.[4] She has since presented many TV programmes, including Loose Lips (with Richard Arnold), Baby Baby, Can We Still Be Friends, Beat The Dealer and Beat the Crusher.

She and her family appeared on All Star Family Fortunes in 2006.

In 2008, Messenger has presented a host of programmes including for the BBC's To Buy or Not to Buy, ITV's Bingo Night Live,[7] and A Garden For Eden for ITV Westcountry.

She did a voiceover for a viewer competition for ITV's Golden Balls between 2008-2009.

Messenger's show Cowboy Builders started on Five on 8 January 2009, co-presented with Dominic Littlewood.[8] Alongside this, Melinda was a contestant in the fourth series of Dancing on Ice, which began on 11 January 2009. This was confirmed on 5 January 2009, on This Morning. She was voted out in Week 7 after losing a surprise skate-off against Jessica Taylor. She had survived three previous skate-offs.

In 2009, Messenger, along with ex-footballer Ian Wright and The Apprentice runner-up Kate Walsh began presenting a new show on Five called Live from Studio Five. The show was first was broadcast on 14 September 2009 and ran continuously until it was cancelled in February 2011. In November 2009, she appeared on the BBC charity telethon Children in Need, where she acted as the assistant to illusion act the Twins in their Clearly Impossible sawing in half illusion.

It was announced on 29 January 2010 that Messenger was leaving her role on Live from Studio Five, to focus on other projects.[9] Her last show was on 26 February 2010 and she was replaced by a series of guest hosts. Messenger later revealed that she had quit the show due to differences with Wright.[10]

In January 2014, Messenger became a contestant on the first series of The Jump, but withdrew on 29 January following a concussion.

Having dated since they met at his local Swansea nightclub,[12] Messenger married Welshman Wayne Roberts in Bali, Indonesia, on 26 November 1998.[3] The couple have three children: Morgan Kelly (born 7 April 2000), Flynn Jefferson (born 2002) and Evie Brooke (born December 2003). Though Messenger expressed a desire for a large family, as she suffered from post-natal depression after the birth of her second and third child, she decided not to have any more children. In 2003, Messenger won Quality Street "Celebrity Mum of the Year".[13] Roberts runs an electronics company based in Swindon, of which Messenger is a director.[1]

In 2005, Messenger became concerned for the education of her children, and although Messenger and Roberts had just completed renovation of their Wanborough-based 25-room former rectory, Messenger insisted that they move closer to a Steiner-Waldorf school in Reading, Berkshire.[1] This brought tensions into the couple's relationship, and, as a result, they separated on 15 April 2008,[4] later re-uniting that same month to discuss their split for a photo-spread in Hello![14] In November 2012, it was announced that Messenger had split from Roberts once again.

From November 2014, she was in a relationship with Warren Smith, who was her coach on The Jump.[15] The couple bought a six-bedroom house together in Berkshire, before separating in November 2017.

On 22 January 2009, Messenger was made an Ambassador to Barnardo's by its president, Camilla, Duchess of Cornwall.