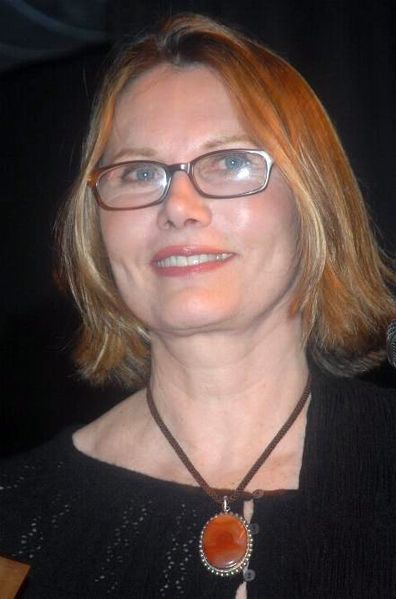 Maud Solveig Christina Adams (née Wikström born 12 February 1945), is a Swedish actress, known for her roles as two different Bond girls, first in The Man with the Golden Gun (1974) and then as the eponymous character in Octopussy (1983), as well as making a brief uncredited appearance in A View to a Kill (1985).

Adams was born Maud Solveig Christina Wikström in Luleå, Sweden, the daughter of Thyra, a government tax inspector, and Gustav Wikström, a comptroller.[1] She had once wanted to work as an interpreter as she is fluent in five languages.[2] She was discovered in 1963 in a shop by a photographer who asked to take her picture, a picture he submitted to the Miss Sweden contest arranged by the magazine Allers; from there her modeling career took off.
Read more...

Adams moved to Paris and later to New York City to work for Eileen Ford. At this time she was one of the highest paid and most exposed models in the world.[citation needed] Her acting career started when she was asked to appear in the 1970 movie The Boys in the Band, in which she played a photo-shoot model in the opening credits. In the 1970s, she guest-starred in such American TV series as Hawaii Five-O and Kojak.

Adams was catapulted to international fame as the doomed mistress of the villain in The Man with the Golden Gun with Roger Moore and Christopher Lee, where her performance was reviewed as "tough but haunted".[3] In short order, she appeared in Norman Jewison's futuristic Rollerball, several European films, and in the steamy obsession thriller Tattoo with Bruce Dern. She was so well regarded by James Bond film series producer Albert Broccoli that she was asked to return as the title character in Octopussy in 1983, this time as the lead—an exotic and mysterious smuggler, also opposite Roger Moore. Adams had Swedish co-stars on her three Bond films, Britt Ekland as Mary Goodnight in The Man with the Golden Gun, in Octopussy both Kristina Wayborn as Magda and Mary Stävin as an Octopussy girl, she was also an extra in A View to a Kill (1985) and there played with Mary Stävin as agent Kimberley Jones and Dolph Lundgren as Venz.[4] While portraying a Bond girl has not always indicated continued success as an actress, Adams comments, "Looking back on it, how can you not really enjoy the fact that you were a Bond Girl? It's pop culture and to be part of that is very nice."[5]

Adams parlayed her performance to a US television series Emerald Point NAS in 1983 and 1984, but was unable to sustain her high profile, falling back on second rate material such as Jane and the Lost City in 1987. In September of that year she also appeared in Playboy in an issue on the Bond Girls.

She hosted the Swedish TV show Kafé Luleå in 1994 and played a guest role in the Swedish soap opera Vita lögner in 1998.

She guest-starred on That '70s Show in 2000, appearing as a bridesmaid to Tanya Roberts, along with Kristina Wayborn (her Octopussy co-star) and Barbara Carrera; all four share the title of Bond girl. Adams has remained close to the Bond producers, often attending Bond premieres and other events associated with the series.[citation needed]

She also was the president of a cosmetics company called Scandinavian Biocosmetics.[6]

Adams's first marriage, from 1966-1975 to photographer Roy Adams, ended in divorce. She married her current husband, private mediator and retired judge, Charles Rubin,[7] in 1999. She does not have any children.