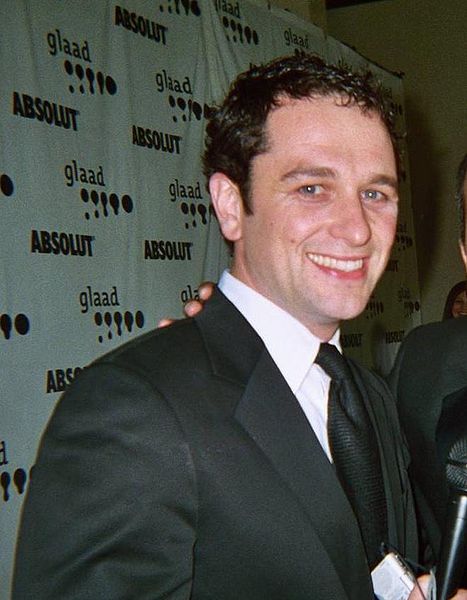 Matthew Rhys Evans (born 8 November 1974),[1] known professionally as Matthew Rhys (/riːs/), is a Welsh actor. He is known for his Emmy Award-winning role as Philip Jennings on the FX drama series The Americans. He also starred as Kevin Walker on the ABC television drama Brothers & Sisters, and as Dylan Thomas in The Edge of Love.

Rhys was born in Cardiff, Wales, the son of Glyn, a headmaster, and Helen Evans, a teacher.[1] He grew up in Cardiff and attended Welsh-medium schools, Ysgol Gynradd Gymraeg Melin Gruffydd (in Whitchurch, Cardiff) and Ysgol Gyfun Gymraeg Glantaf (in Llandaff North, Cardiff). In 1993, he was awarded the Patricia Rothermere Scholarship.[2]

At age 17, after playing Elvis Presley in a school musical, he applied to and was accepted at the Royal Academy of Dramatic Art (RADA) in London.[3] His older sister Rachel, now a BBC broadcast journalist, also attended.

During Rhys time at RADA, Rhys appeared in the BBC police series Back-Up as well as in House of America. He returned to Cardiff to act in his own language in the Welsh film Bydd yn Wrol (Be Brave),[4] for which he won Best Actor at the Bafta Cymru (Welsh BAFTAs).

In January 1998, Rhys went to New Zealand to star in Greenstone, a colonial costume drama for television. He then landed a role in Titus, Julie Taymor's adaptation of Titus Andronicus, starring Anthony Hopkins and Jessica Lange. Next he played Ray in Peter Hewitt's film comedy, Whatever Happened to Harold Smith? After returning to Wales, he did two consecutive films with Jonathan Pryce: The Testimony of Taliesin Jones, a film about a dysfunctional single-parent family in which he played the elder son, and Sara Sugarman's comedy Very Annie Mary, in which he played the role of Nob. Rhys would later reunite with Very Annie Mary star Rachel Griffiths on Brothers & Sisters.[5]

In 2000, Rhys played the lead role in Metropolis, a drama series for Granada TV about the lives of six twenty-somethings living in London.[3] Next he starred in Peaches, the film of the play written and directed by Nick Grosso.[6][7] Rhys starred as Benjamin in the 2000 world premiere of the stage adaptation of The Graduate, alongside Kathleen Turner at The Gielgud Theatre in London's West End.[8]

Rhys travelled to Ireland to star in the 18th century swashbuckling adventure, The Abduction Club.[9] He played the lead role of Darren Daniels in Tabloid, and then returned to New Zealand to shoot the epic drama Lost World for the BBC. His other film credits include the independent horror film Deathwatch in Prague and Fakers, a comic crime caper.

In 2003, he played Justin Price, the murderer in the final episode of the long-running television series Columbo.[10]

He appeared opposite Brittany Murphy in the independent feature Love and Other Disasters, in Virgin Territory opposite Hayden Christensen, Tim Roth and Mischa Barton, and playing poet Dylan Thomas in the love quadrangle biographical film The Edge of Love.[11]

He moved to Santa Monica after being cast in ABC's show Brothers & Sisters, as lawyer Kevin Walker. The show had a five-season run, coming to an end in 2011.[8]

In January 2012, Rhys appeared in a BBC Two two-part drama adaptation of Charles Dickens' last novel, The Mystery of Edwin Drood, left unfinished at his death in 1870.[12] The Public Broadcasting Service (PBS) aired it in the United States as one feature-length episode on 15 April 2012.

In 2012 Rhys was scheduled to reprise Sir Alec Guinness' 1959 double role of John Barratt/Jacques DeGué in a new adaptation of The Scapegoat.[13] That same year, Rhys was cast as "Jimmy" in the Roundabout Theatre Company's Off-Broadway revival of John Osborne's play, Look Back in Anger, at the Laura Pels Theatre in the Harold and Miriam Steinberg Center for Theatre. The production played a limited engagement through 8 April 2012.[14]

He starred opposite Keri Russell in the FX series The Americans, a 1980s Cold War spy drama about Russian KGB sleeper agents (Rhys and Russell, who portray married KGB agents with two children, among other agents and handlers). Rhys and Russell are real-life partners off-screen as well. The sixth season airing in 2018 was the final season of The Americans.[15] The show debuted in January 2013.[16]

Rhys was housemates for nearly 10 years with fellow Welshman and actor Ioan Gruffudd,[17] and served as best man at Gruffudd's wedding.[18] Both are patrons of Trust PA, a UK spinal injuries charity.[19]

On 15 July 2008, Rhys was honoured by Aberystwyth University as a Fellow.[20] On 8 August 2008, he was honoured at the Welsh National Eisteddfod by being accepted as a member to the druidic order of the Gorsedd of the Bards,[21] for his contributions to the Welsh language and Wales. His bardic name in the Gorsedd is Matthew Tâf. In August 2009, Rhys took to the stage with the National Youth Orchestra of Wales as part of the National Eisteddfod.[22]