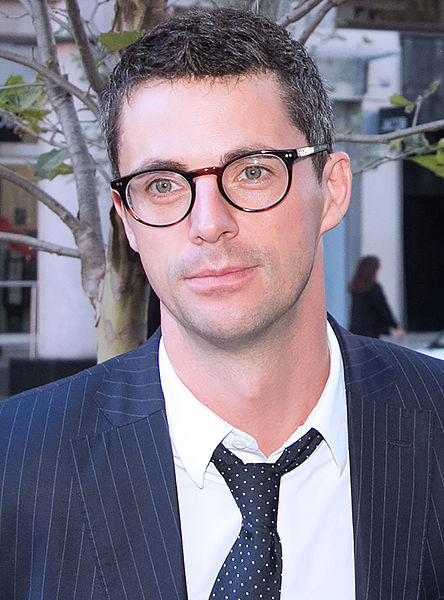 Matthew William Goode (born 3 April 1978) is an English actor. He made his screen debut in 2002 with ABC's TV film feature Confessions of an Ugly Stepsister. His breakthrough role was in romantic comedy Chasing Liberty (2004), for which he received a nomination at Teen Choice Awards. He then appeared in supporting roles in Woody Allen's Match Point (2005), the German-British romantic comedy Imagine Me and You (2006), the period drama Copying Beethoven (2006). He gained praise for his performance as Charles Ryder in Julian Jarrold's adaptation of Evelyn Waugh's Brideshead Revisited (2008) and as Ozymandias in the American neo-noir-superhero film Watchmen (2009), based on DC Comics' limited series of the same name. He then starred in romantic comedy Leap Year (2010) and Australian drama Burning Man (2011), the latter earning him a nomination for Best Actor at the Film Critics Circle of Australia Awards.

Other notable film roles include The Lookout (2007), A Single Man (2009), Cemetery Junction (2010), Stoker (2013), Belle (2013), The Imitation Game (2014) and Self/less (2015). As well as appearing in films, Goode has appeared in numerous television shows. His most notable television roles include Henry Talbot in the final season of historical period drama Downton Abbey and Finley "Finn" Polmar in the CBS legal drama The Good Wife. He also had a lead role in the critically acclaimed British mini-serial Dancing on the Edge, as music journalist Stanley Mitchell, for which he earned a nomination for Best Actor in a Miniseries or a Television Film at the Satellite Awards. In 2017, Goode portrayed Antony Armstrong-Jones, 1st Earl of Snowdon in the Netflix biographical drama series The Crown, for which he received a Primetime Emmy Award nomination.[2] He portrays the vampire Matthew Clairmont in the fantasy-horror series A Discovery of Witches.

Goode was born in Exeter, Devon. His father, Anthony, was a geologist and his mother, Jennifer, is a nurse and amateur theatre director. Goode is the youngest of five children with a brother, two half-brothers, and a half-sister, television presenter Sally Meen, from his mother's previous marriage. He grew up in the village of Clyst St. Mary, near Exeter.[3] Goode was educated at Exeter School, an independent school in Exeter, Devon,[4] followed by the University of Birmingham and London's Webber Douglas Academy of Dramatic Art.
Read more...

Goode played Peter Lynley, the brother of Inspector Lynley in the BBC production Inspector Lynley Mysteries: A Suitable Vengeance and co-starred in the TV film Confessions of an Ugly Stepsister, based on the Gregory Maguire novel of the same name and William Shakespeare's play The Tempest. In 2004, Goode made his American film debut opposite Mandy Moore in the romantic comedy Chasing Liberty.

Goode co-starred in Woody Allen's thriller Match Point, opposite Jonathan Rhys Meyers and Scarlett Johansson, Ol Parker's romantic comedy Imagine Me & You, opposite Piper Perabo and Lena Headey, the TV film My Family and Other Animals, opposite Imelda Staunton, the biographical-musical drama Copying Beethoven, opposite Ed Harris and Diane Kruger and Scott Frank's crime drama The Lookout opposite Joseph Gordon-Levitt. He had a whimsical take on Brooke Burgess in the BBC miniseries He Knew He Was Right based upon Anthony Trollope's novel of the same name.

Goode with Stoker cast and crew at Sundance Film Festival.

In 2013, Goode played the lead in the BBC Two drama Dancing on the Edge, as magazine columnist Stanley Mitchell. That same year, he co-starred opposite Mia Wasikowska and Nicole Kidman in the psychological thriller film Stoker.

Also in 2013, Goode co-starred as George Wickham opposite Matthew Rhys in the three-part BBC murder mystery miniseries Death Comes to Pemberley, based on P. D. James' novel of the same name, and a spin-off of the 1995 drama miniseries Pride and Prejudice to commemorate the 200th anniversary of the publication of Jane Austen's novel of the same name.[6]

In March 2014, Goode joined the cast of the CBS legal drama The Good Wife during the fifth season replacing Josh Charles, who played Will Gardner,[7][8] as Finley "Finn" Polmar, a state prosecutor. He made his debut in the fifteenth episode titled "Dramatics, Your Honor" in which Will was killed off.[9][10][11] That same year, he appeared in the historical thriller The Imitation Game as Hugh Alexander, a British Second World War cryptanalyst and chess champion.[12]

In 2014, Goode co-starred in the ITV drama Downton Abbey's Season 5 Christmas special titled "A Moorland Holiday" as Henry Talbot.[13] He returned to Downton Abbey in October 2015 beginning in the fourth episode of the sixth season. Goode was also scheduled for a brief appearance in the upcoming Downtown Abbey film which began production in late August 2018.[14]

He began working on WGN's production of Roadside Picnic series based on the Strugatsky novel in autumn 2016, but the pilot was cancelled.[16]

In 2017, Goode began production on a television adaptation of Deborah Harkness's bestselling All Souls trilogy for Sky One in the United Kingdom. The show, titled A Discovery of Witches, takes its title from the series' first book. He plays the lead role of Professor Matthew Clairmont, a molecular biologist at Oxford, and a vampire. The show was first broadcast in the UK on September 14, 2018.