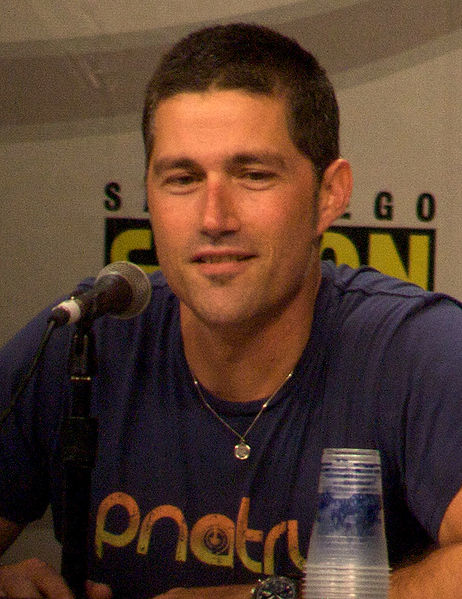 Matthew Chandler Fox (born July 14, 1966) is an American actor. He is known for his roles as Charlie Salinger on Party of Five and Jack Shephard on the supernatural drama television series Lost.

Fox was born in Abington, Pennsylvania, the son of Loretta B. (née Eagono) and Francis G. Fox. One of his paternal great-great-great-grandfathers was Union General George Meade. His father was from a "very blue-blood" Pennsylvania family of mostly English descent, while his mother was of half Italian and half British and Irish ancestry. When Fox was a year old, he moved to Wyoming with his parents and siblings, Francis, Jr. (b. 1961) and Bayard (b. 1969). They settled in Crowheart, on the Wind River Indian Reservation. His mother was a teacher, and his father, who had been a consultant for an oil company, raised longhorn cattle and horses, and grew barley for Coors beer. When Fox was young, his parents worked as caretakers of the remote "Bitterroot Ranch" outside Dubois, Wyoming.

Fox graduated from high school in Wyoming and attended Deerfield Academy for a post-graduate year. Following Deerfield, Fox attended Columbia University, where he majored in Economics, played on the football team, and became a brother of the Phi Gamma Delta fraternity. Fox interviewed for a job to sell stocks at Prudential-Bache.

At the age of 25, Fox made his debut on an episode of Wings. That same year, he also starred on a short-lived dramatic series, Freshman Dorm. Still not a familiar face on the small screen, he continued to be cast in supporting roles, including the role of Charlie in the CBS Schoolbreak Special series, If I Die Before I Wake before he made his big screen debut in My Boyfriend's Back (1993).

In 1994, Fox was cast in a starring role as Charlie Salinger, the eldest of five siblings who lose both parents in a car accident on the 1990s teen drama Party of Five, co-starring with Scott Wolf, Neve Campbell, Jennifer Love Hewitt, and Lacey Chabert. In 1996, People Magazine named Fox one of the 50 Most Beautiful People in the World. After Party of Five was cancelled following its sixth season, Fox starred in another TV series, Haunted, in 2002.

From September 2004 until May 2010, Fox played the role of the dedicated yet troubled surgeon, Dr. Jack Shephard, on Lost. He initially auditioned for the role of James "Sawyer" Ford. However, co-creator J. J. Abrams thought he would be better for the role of Jack, a role originally slated to be for the pilot episode only. Fox was nominated for a Golden Globe, won the 2005 Satellite Award, and shared the 2006 Screen Actors Guild Award for Outstanding Performance by an Ensemble in a Drama Series, for his role in Lost.

On December 2, 2006, he hosted Saturday Night Live with musical guests Tenacious D. In 2006, Fox co-starred with Matthew McConaughey in the sports drama, We Are Marshall. He also played a bit part in the action film Smokin' Aces and starred in the 2008 thriller, Vantage Point. In May 2008, Fox starred as Racer X in the movie Speed Racer.

Fox has repeatedly stated that he is "done with television" after Lost.

In 2011, he starred in the stage play In a Forest, Dark and Deep with Olivia Williams in London's West End.

Fox appears in Alex Cross (2012), as Michael "The Butcher" Sullivan/"Picasso". Fox developed an extremely muscular physique for the role and shed most of his body fat.

He appeared in the 2013 film World War Z alongside Brad Pitt.

He starred in the film Extinction released in July 2015, directed by Miguel Ángel Vivas, in adaptation of the Juan de Dios Garduño's bestseller book Y pese a todo.

Fox met his wife, Margherita Ronchi, at university, and they married shortly after in 1992. They have two children, a daughter named Kyle and a son named Byron.

Fox is a keen photographer. A bonus disc released with The Complete First Series of Lost includes features "The Art of Matthew Fox", showing pictures he took of the cast and crew while on set.

On August 28, 2011, Fox was reported to have punched a female bus driver in the chest and pelvic area after he attempted to board a party bus reserved for a private bachelor party outside of Christie's Cabaret in Cleveland, Ohio. On September 16, 2011, a spokeswoman for the city of Cleveland announced that prosecutors had decided not to charge Fox. A civil suit related to the alleged incident has been filed. In October 2012, Fox appeared on The Ellen Show and dismissed all accusations as false, stating he could not refute them at the time due to the ongoing legal case.

On May 6, 2012, Fox was arrested for driving under the influence in Oregon. He was taken into custody and released that same day. On June 1, 2012, Fox's lawyer entered a plea of no contest to one count of DUI in Deschutes County Circuit Court and stated that they will move forward with a diversion program to avoid criminal charges.

Report a problem
Write to Matthew Fox at FanPal • 2022