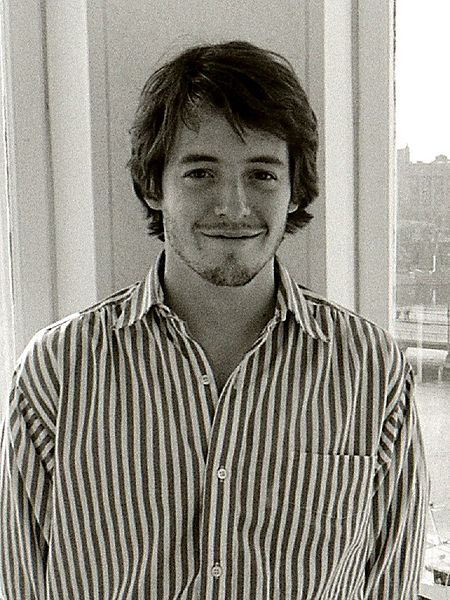 Matthew Broderick (born March 21, 1962) is an American actor and singer. His roles include the title character in Ferris Bueller's Day Off (1986), the adult voice of Simba in Disney's The Lion King trilogy (1994-2004), David Lightman in the Cold War thriller WarGames (1983), and Leo Bloom in the Broadway production of The Producers (2005).

In 2006, for his contributions to the film industry, Matthew Broderick was inducted into the Hollywood Walk of Fame with a motion pictures star located at 6801 Hollywood Boulevard.[2] Eleven years later, Broderick earned induction into the American Theater Hall of Fame.[3]

Broderick was born in Manhattan, New York, the son of Patricia (née Biow), a playwright, actress, and painter, and James Broderick, an actor[4] and a World War II veteran.[5] His mother was Jewish, but not religious (a descendant of Jewish immigrants from Germany and Poland).[6][7][8][9][10][11] His father was a Catholic of Irish, and some English, descent.[12][13][14] Broderick attended grade school at City and Country School (a progressive K-8 school in Manhattan) and high school at Walden School (a defunct private school in Manhattan with a strong drama program).[15]
Read more...

Broderick in Sweden during his promotion of Ferris Bueller's Day Off

Broderick's first major acting role came in an HB Studio workshop production of playwright Horton Foote's On Valentine's Day, playing opposite his father, who was a friend of Foote's. This was followed by a supporting role as Harvey Fierstein's gay adopted son, David, in the Off-Broadway production of Fierstein's Torch Song Trilogy; then, a good review by The New York Times theater critic Mel Gussow brought him to the attention of Broadway. Broderick commented on the effects of that review in a 2004 60 Minutes II interview:

"Before I knew it, I was like this guy in a hot play. And suddenly, all these doors opened. And it's only because Mel Gussow happened to come by right before it closed and happened to like it. It's just amazing. All these things have to line up that are out of your control."

He followed that with the role of Eugene Morris Jerome in the Neil Simon Eugene Trilogy including the plays, Brighton Beach Memoirs and Biloxi Blues. His first film role was also written by Neil Simon. Broderick debuted in Max Dugan Returns (1983). His first big hit film was WarGames, a summer hit in 1983,[16] in which he played the main role of David Lightman, a Seattle teen hacker. This was followed by the role of Philippe Gaston in Ladyhawke, in 1985.[15][17]

Broderick then won the role of the charming, clever slacker in the 1986 film Ferris Bueller's Day Off. At the age of 23, Broderick played a high school student who, with his girlfriend and best friend, plays hooky and explores Chicago. The film is a 1980s comedy favorite, and is one of Broderick's best known roles (particularly with teenage audiences). Also in 1987, he played Air Force research assistant Jimmy Garrett in Project X. In 1988, Broderick played Harvey Fierstein's gay lover, Alan, in the screen adaptation of Torch Song Trilogy. In the 1989 film Glory, he received favorable reviews for his portrayal of the American Civil War officer Robert Gould Shaw, whom Broderick incidentally physically resembled at the time.

In the 1990s, Broderick was the voice of the adult Simba, in Disney's successful animated film The Lion King, and also voiced Tack the Cobbler in Miramax's controversial version of The Thief and the Cobbler, which had originally been intended as a silent role. He won recognition for two dark comedy roles. The first was that of a bachelor in The Cable Guy with Jim Carrey. The second was that of a high school teacher in Alexander Payne's Election with Reese Witherspoon.

Broderick returned to Broadway as a musical star in the 1990s, winning a Tony Award for his performance in How to Succeed in Business Without Really Trying and was nominated for another Tony for his role in the Mel Brooks 2001 stage version of The Producers. In the latter production, he played Leopold "Leo" Bloom, an accountant who co-produces a musical designed to fail, but which turns out to be successful. Broderick reprised the role in the 2005 film adaptation of the same name.

Broderick was reunited with his co-star from The Lion King and The Producers, Nathan Lane, in The Odd Couple, which opened on Broadway in October 2005. He appeared on Broadway as a college professor in The Philanthropist, running April 10 through June 28, 2009.[18] He returned to the Broadway stage in Spring 2012, to star in the musical Nice Work If You Can Get It, directed and choreographed by Kathleen Marshall.[19]

Broderick met actress Sarah Jessica Parker through her brother. The couple married on May 19, 1997,[20] in a civil ceremony in a historic deconsecrated synagogue on the Lower East Side. Although Broderick considers himself culturally Jewish,[21][22] the ceremony was performed by his sister, Janet Broderick Kraft, an Episcopal priest.[23]

Parker and Broderick have a son, James Wilkie Broderick, born October, 2002. In April 2009, it was confirmed that Broderick and Parker were expecting twin girls through surrogacy.[24] Broderick and Parker's surrogate delivered their twin daughters, Marion Loretta Elwell and Tabitha Hodge, in June 2009.[25][26] Broderick is a New York Mets fan, while Parker supports the New York Yankees, and their son the Boston Red Sox.[27]

Although the couple lives in Manhattan, Broderick and Parker spend a considerable amount of time at their holiday home near Kilcar, a village in County Donegal, Ireland, where Broderick spent his summers as a child.[28] They also have a house in The Hamptons.[29]

In March 2010, Broderick was featured in the NBC program Who Do You Think You Are?. Broderick stated that his participation in the ancestry research program emotionally reconnected him with the role he played in Glory 22 years earlier, as he discovered a paternal great-great-grandfather, Robert Martindale, who actually was a Union soldier. A veteran of the Battle of Gettysburg, Martindale, who belonged to the 20th Connecticut, was killed in the aftermath of the Battle of Atlanta and was eventually interred in an unnamed grave at the Marietta National Cemetery. Having identified the grave with the help of historian Brad Quinlin, Broderick's research enabled him to give his ancestor his name back. In the same program, Broderick discovered that his paternal grandfather, James Joseph Broderick II, whom he had never known, had been a highly decorated combat medic in World War I, having earned his distinctions during the Meuse-Argonne Offensive.[5]

On August 5, 1987, while driving a rented BMW in Enniskillen, Northern Ireland, Broderick crossed into the wrong lane and collided head-on with a Volvo driven by Anna Gallagher, 30, accompanied by her mother, Margaret Doherty, 63, killing both instantly. He was vacationing with Jennifer Grey, whom he began dating in semi-secrecy during the filming of Ferris Bueller's Day Off, the crash publicly revealing their relationship. He had a fractured leg and ribs, a concussion, and a collapsed lung. She received minor injuries, including whiplash.

The victims' son and brother, Martin Doherty, called the verdict "a travesty of justice". He later forgave Broderick, amid plans to meet with him in 2003, to gain a sense of closure. In February 2012, when Broderick was featured in a multi-million-dollar Honda commercial aired during the Super Bowl, Doherty said the meeting had not taken place and that Broderick "wasn't the greatest choice of drivers, knowing his past."[34]