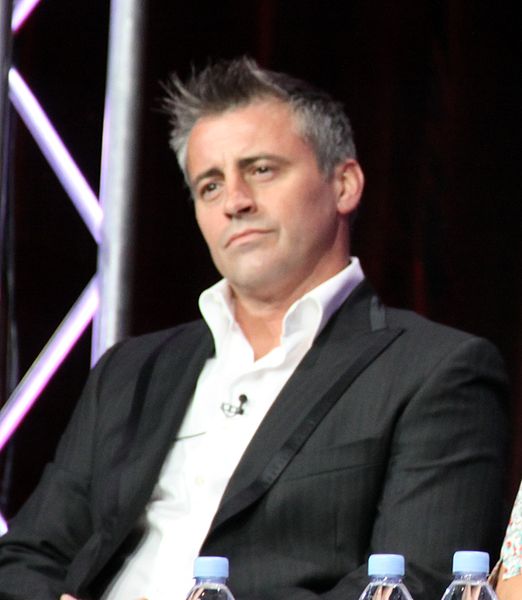 Matthew Steven LeBlanc (/ləˈblɒŋk/; born July 25, 1967)[2] is an American actor, comedian and television host. He received international recognition for his portrayal of dim-witted womaniser Joey Tribbiani on the NBC sitcom Friends, which ran from 1994 to 2004. For his work on Friends, LeBlanc received three Emmy Award nominations. LeBlanc has also starred as a fictionalized version of himself in the BBC/Showtime comedy series Episodes (2011-2017), for which he won a Golden Globe Award and received four additional Emmy Award nominations. From 2016 to 2018, LeBlanc hosted the BBC series Top Gear. He plays Adam Burns in the CBS sitcom Man with a Plan since 2016.

LeBlanc was born in Newton, Massachusetts. His mother, Patricia (née Di Cillo), was an office manager, and his father, Paul LeBlanc, was a mechanic.[2][3][4] His father is of French-Canadian descent and his mother is of Italian ancestry.[5] He attended Newton North High School, and graduated in 1985, alongside comedian Louis C.K.[6][7]

At the age of 17 LeBlanc moved to New York to pursue a career in modelling.[7]

LeBlanc first appeared in a 1987 Heinz Tomato Ketchup commercial. In 1988, he starred in the television drama TV 101 for one season. In 1991, he had a recurring role on the hit Fox sitcom Married... with Children. He played Vinnie Verducci, the son of one of the friends of the protagonist, Al Bundy and the boyfriend of Al's daughter, Kelly. He went on to star in two short-lived spin-offs of Married... with Children, Top of the Heap in 1991 and Vinnie and Bobby in 1992.

He appeared in two of Jon Bon Jovi's music videos: "Miracle", from the Young Guns II soundtrack in 1990, and "Say It Isn't So" in 2000.[8] He also appeared in Alanis Morissette's single "Walk Away" in 1991, in the last seconds of Tom Petty and the Heartbreakers "Into the Great Wide Open" in which he is seen getting a tattoo, and in Bob Seger's "Night Moves" in 1994.[9]

LeBlanc found success in the role of Joey Tribbiani on Friends, and went on to play this character for 12 years — 10 seasons of Friends and two seasons of Joey. Friends was wildly successful, and LeBlanc, along with his co-stars, gained wide recognition among viewers. This ensemble situation comedy became a major hit for NBC, airing on Thursday nights for ten years.[10]

LeBlanc at the 69th Annual Golden Globes Awards, with Meryl Streep, on January 15, 2012.

Following the cancellation of Joey, LeBlanc announced that he would be taking a one-year hiatus from acting on TV, which later turned into five years. His next role would be as a fictionalized version of himself on Episodes.[11]

In 2011, LeBlanc began appearing as a fictional version of himself in Episodes, a BBC/Showtime television series about a British television series that is remade for an American audience.[12][13] The series is written by Friends co-creator David Crane and his partner Jeffrey Klarik.[14] LeBlanc won the 2012 Golden Globe for Best Actor in a TV Series Comedy for his performance, and was nominated for an additional four Primetime Emmy Awards.[15] The final season of Episodes, its fifth, began filming in 2016 and premiered in 2017.[16]

In February 2012, LeBlanc appeared in the second episode of the eighteenth series of Top Gear, where he set the fastest time of 1:42.1 in the Kia Cee'd, narrowly beating previous holder Rowan Atkinson by 0.1 seconds.[9] He also appeared in the fourth episode of the nineteenth season, to race the New Kia Cee'd, and beat his previous time. In February 2016, the BBC announced LeBlanc was to be one of the new presenters of Top Gear.[17] In September 2016, LeBlanc signed a new two-year deal to continue hosting Top Gear.[18] It was confirmed on 31 May 2018 that LeBlanc had decided to leave Top Gear after 3 years on the show. Matt's last series will air in Autumn 2018. Matt said about leaving the show stating, "LeBlanc said that despite the show being "great fun", the "time commitment and extensive travel... takes me away from my family and friends more than I'm comfortable with." He added: "It's unfortunate, but for these reasons I will not be continuing my involvement with the show. I will forever be a Top Gear fan and I wish the team continued success. Thanks for a great drive." The twenty-sixth series will be the last with LeBlanc.[19]

LeBlanc married Melissa McKnight (b. 1964 or 65), an American model, in May 2003.[21] McKnight and LeBlanc had been introduced in 1997 by her friend Kelly Phillips, wife of actor Lou Diamond Phillips, and LeBlanc proposed to her a year later.[21] Their daughter Marina Pearl, born in 2004, began suffering seizures when she was eight months old. By the time she was two years old, however, the condition, thought to be a form of dysplasia, had mostly subsided. He was also step-father to McKnight's two children from her first marriage, Tyler (b. 1991) and Jacqueline Esposito.[21][22]

After his divorce, LeBlanc began dating actress Andrea Anders. The two met while filming the short-lived sitcom Joey. A representative for the pair confirmed the couple had split in January 2015.[24]

In March 2018, LeBlanc confirmed that he was dating Aurora Mulligan, a producer on Top Gear.[7]

Report a problem
Write to Matt LeBlanc at FanPal • 2021