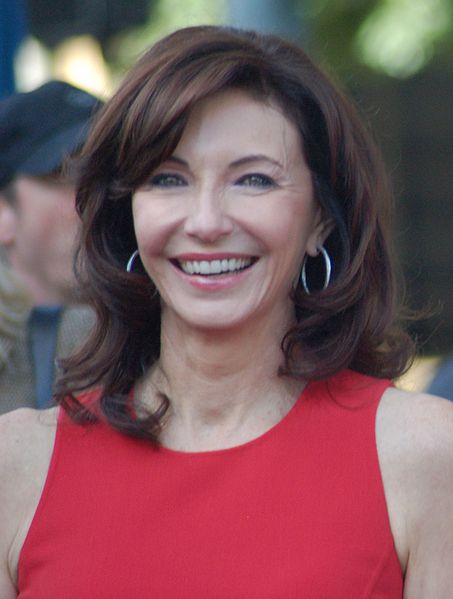 Steenburgen was born in Newport, Arkansas, to Nellie Mae (née Wall; 1923-2010),[3] a school-board secretary, and Maurice Hoffman Steenburgen (1914-1989), a freight-train conductor who worked at the Missouri Pacific Railroad.[4][5][6][7] She has a sister, Nancy (Steenburgen) Kelly, a teacher.[8] Her ancestry includes Dutch,[9] English, Scottish, and Welsh.

In 1971, she enrolled at Hendrix College to study drama.[6] She subsequently traveled to Dallas at the suggestion of her drama teacher where she successfully auditioned for New York City's Neighborhood Playhouse.[6]

Steenburgen moved to Manhattan in 1972 after being selected by the Neighborhood Playhouse to study acting. She worked as a server at The Magic Pan and for Doubleday while studying under Will Esper.[10]

Steenburgen's break came when she was discovered by Jack Nicholson in the reception room of Paramount's New York office, and was cast as the female lead in his second directorial work, the 1978 Western Goin' South.[10]

Steenburgen had a leading role in the 1979 film Time After Time as a modern woman who falls in love with author H. G. Wells, played by her future first husband, Malcolm McDowell.

In her third film, she won the Academy Award for Best Supporting Actress for the 1980 film Melvin and Howard, playing Lynda Dummar, the wife of Melvin Dummar, then a trucker and aspiring singer, who claimed to have befriended reclusive eccentric Howard Hughes. Another notable film appearance came in the well-received 1983 film Cross Creek, in which she played Marjorie Kinnan Rawlings, author of The Yearling. In 1985, she also starred in the movie One Magic Christmas as a mother and wife who falls on devastating times at Christmas only to rely on a Christmas miracle to save her family.

Other performances have been: in What's Eating Gilbert Grape (1993), as a woman who is having an affair with the title character (played by Johnny Depp); the role of Hannah Nixon in the Oliver Stone biopic, Nixon (1995); and in the Will Ferrell 2003 comedy Elf, as a woman who discovers that her husband is the father of one of Santa's elves.

She has appeared in the comedy films Step Brothers (2008), starring Will Ferrell, playing the mother of Ferrell's character; Four Christmases (2008) opposite Vince Vaughn and Reese Witherspoon; and The Proposal (2009) opposite Sandra Bullock and Ryan Reynolds.

Dirty Girl, which features Steenburgen along with Juno Temple, Milla Jovovich and William H. Macy, premiered at the Toronto International Film Festival on September 12, 2010. She also appeared in the critically acclaimed film The Help (2011), starring alongside Emma Stone, Viola Davis and Bryce Dallas Howard, and had a featured role as a lounge singer, who is the romantic interest in a love triangle, in the 2013 comedy Last Vegas.

She had a small part in the 2015 film A Walk in the Woods as Jeannie. In 2018, Steenburgen starred opposite Jane Fonda, Diane Keaton, and Candice Bergen in the romantic comedy film Book Club.

In television, Steenburgen appeared as Kate Montgomery in Ink (1996) with her husband, Ted Danson, and co-starred with Danson as Mary Gulliver in Gulliver's Travels (1996). She has a recurring role as herself with Danson in Curb Your Enthusiasm. Steenburgen co-starred as Helen Girardi, the mother of Amber Tamblyn's title character in Joan of Arcadia. In 2011, she had a recurring role as Josephine in the HBO sitcom Bored to Death with Danson again. Steenburgen starred as Anastasia Lee in the 2011 FX pilot, Outlaw Country,[11] but it was passed by the network.[12] She finally appeared on FX in the dark sitcom Wilfred from 2011 through 2013 as Catherine Newman, the title character's eccentric and mentally ill mother. Steenburgen had a recurring role on the NBC sitcom 30 Rock from 2012 to 2013 where she played Diana Jessup.

In 2014, she began a recurring role as former Dixie Mafia boss Katherine Hale in the fifth and sixth seasons of Justified.

On June 13, 2014, it was announced that Steenburgen would have a recurring role as Delia in the Netflix crime comedy-drama Orange Is the New Black in the third season.[13]

From 2015 to 2018, she starred as Gail Klosterman on the comedy series The Last Man on Earth.

After minor surgery on her arm, on April 17, 2007, which required a general anesthetic, Steenburgen developed a new passion for singing and songwriting. She began writing everything down and by 2017 had composed more than 40 songs. She has collaborated with musicians from Nashville and was also signed to Universal Music as a songwriter. In Last Vegas, Steenburgen plays a lounge singer and even performs one of her original compositions on screen.[14][15]

In 1978, Steenburgen met and began dating actor Malcolm McDowell while both were co-starring in Time After Time.[16] They married in 1980 and had two children together, daughter Lilly and son Charlie McDowell. Steenburgen and McDowell separated in 1989 and divorced in 1990.[17]

On October 7, 1995, Steenburgen married actor Ted Danson, whom she had met on the set of the film Pontiac Moon in 1993, and became the stepmother to Danson's daughters Kate and Alexis from his previous marriage, to producer Cassandra Coates.[17] Steenburgen currently resides in the Los Angeles area with her family.[18]

An alumna of Hendrix College, Steenburgen received an honorary doctorate from the institution in 1989.[19] In 2006, Steenburgen received an honorary Doctor of Humane Letters degree from Lyon College in Batesville, Arkansas.[20] In September 2005, she and Danson gave a guest lecture for students at the Clinton School of Public Service where they discussed their roles in public service as well as the foundations and causes in which they are involved.[21]

Steenburgen is a close friend of former Senator and Secretary of State Hillary Clinton, and supported Clinton's 2008 Presidential campaign along with Danson.[22] She also spoke at the 2016 Democratic National Convention.

Steenburgen is also an active humanitarian who is involved with various groups ranging from human rights to environmental causes.[23]

In addition to these recognitions, Steenburgen received the 1,337th star on Hollywood Walk of Fame on December 16, 2009.