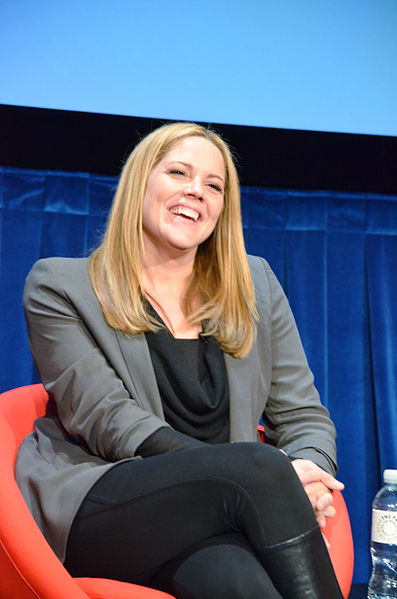 McCormack was born in Plainfield, New Jersey.[1] She is the daughter of clinical therapist Norah and car dealership and ice cream parlor owner William McCormack.[2] Her parents divorced in 1990.[3] Her sister Bridget is a justice of the Michigan Supreme Court[4] and a former professor of law at the University of Michigan Law School.[5] Her brother William is an actor[6] who has appeared in a recurring role as FBI agent Robert O'Connor on In Plain Sight.

In 1987, McCormack graduated from the Wardlaw-Hartridge School in Edison, New Jersey. In 1991, she received her BA in comparative arts, specifically painting and creative writing, from Trinity College in Hartford, Connecticut.[7]

McCormack began her acting career at age 12, performing in Gian Carlo Menotti's Christmas opera Amahl and the Night Visitors.[citation needed] She continued her stage work in musicals and finished an acting program at the William Esper Studio.[3] She has worked in New York theater productions, including The Atlantic Theater Company, Alice's 4th Floor, and Naked Angels, where she appeared in Jon Robin Baitz's A Fair Country.[citation needed]

McCormack portrayed Justine Appleton on Murder One (1995–1997)[3] and also starred in the HBO series K Street, which aired for only ten episodes.[citation needed] She starred in Howard Stern's movie Private Parts in 1997.[3] In 2004, McCormack joined the cast of The West Wing as Deputy National Security Advisor and ex-CIA officer Kate Harper. Her character soon became a recurring role and remained throughout the last three seasons until the series finale.[8]

McCormack starred in the USA Network series In Plain Sight. She portrayed Mary Shannon, a deputy United States marshal attached to the Albuquerque, New Mexico, office of the Federal Witness Security Program (WITSEC), more commonly known as the Federal Witness Protection Program. On July 28, 2010, the show was renewed for its fourth and fifth seasons, to run in 2011 and 2012.[9] The show was ended in 2011, making the fifth season its last.[10] After its end, McCormack was cast as the lead in Kari Lizer's untitled comedy pilot on ABC.[11]

McCormack was nominated for the 2008 Tony Award for Best Performance by a Featured Actress in a Play for the role of Gretchen in the 2008 Broadway revival of Boeing Boeing.[12]

In 2012, McCormack reunited with the cast of The West Wing to film a video that served both as a reminder that U.S. voters should vote for non-partisan candidates when they cast their ballots and as a video promoting McCormack's sister's ultimately successful judicial candidacy for the Michigan State Supreme Court.[13]

In July 2003, McCormack married director and producer Michael Morris.[18] Together they have three daughters, Margaret (born 2004), Rose (born 2007), and Lillian (born 2011).[19] They were briefly separated when her husband was photographed kissing singer/actress Katharine McPhee.

McCormack is the godmother of In Plain Sight co-star Fred Weller's daughter.[20]