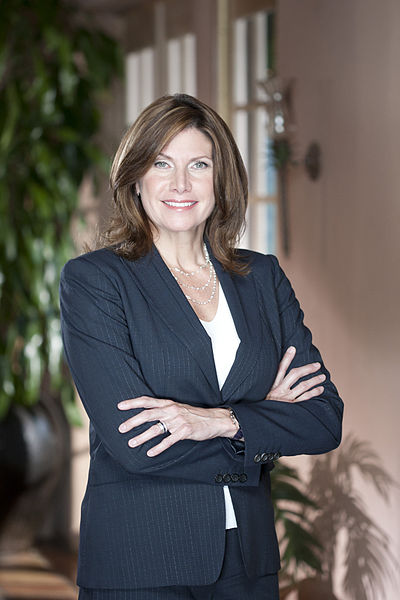 Mary Bono (née Whitaker and formerly Mary Bono Mack, born October 24, 1961) is a former U.S. Representative for California's 45th congressional district, and previously the 44th, serving from 1998 to 2013. She was first elected to Congress to replace her late husband, Sonny Bono, who had died months before. She is a member of the Republican Party. Bono's district was based in Palm Springs and included most of central and eastern Riverside County. She sat on the Energy and Commerce Committee, and was Chairwoman for the Subcommittee on Commerce, Manufacturing and Trade.

Bono was defeated in her bid for reelection in 2012 by Dr. Raul Ruiz. She was, at the time, the sole female Republican in California's congressional delegation, and until Congresswoman Mimi Walters was elected in November 2014, no other female Republican was part of the delegation.

On March 19, 2013, Bono announced she was joining Washington, D.C.-based federal affairs firm Faegre Baker Daniels Consulting as senior vice president.[1] Now a principal, she focuses her government advocacy and consulting practice there on legislative, regulatory and policy matters related to the entertainment, media and information technology sectors. She also is a nationally recognized advocate for drug abuse prevention and treatment.

In the wake of the Michigan State University sex abuse scandal and the Deborah Daniels report as a result, Bono was named on October 12, 2018 as the interim president and chief executive officer of USA Gymnastics.[2] She resigned four days later, following criticism over her marking out the Nike logo on her sneakers and their support for Colin Kaepernick.[3]

She graduated from the University of Southern California in 1984[6] with a bachelor of arts in art history. She was an accomplished gymnast in her youth.[7]

In 1986, she married actor/singer Sonny Bono and moved to Palm Springs where the two operated a restaurant they owned.[6] Sonny Bono served as Mayor of Palm Springs from 1988 to 1992 before being elected to Congress in 1994.[8] Sonny Bono died in a skiing accident on January 5, 1998.

In 1998, before she was elected to the Congress, she strongly supported the Copyright Term Extension Act.

Subsequently, she won the Republican nomination for the special election to succeed him in what was then the 44th District. She then won in the special election held on April 7, 1998. She won a full term later that same year, in November 1998. She was re-elected six more times from this district, which was renumbered as the 45th after the 2000 census. Before 2012, her only close race was in 2010, when former Palm Springs mayor Steve Pougnet held her to 52 percent of the vote.

After the 2010 census, however, her district was renumbered as the 36th District and made somewhat more Democratic. In a significant upset, Democratic challenger Raul Ruiz, a physician, defeated her with 53 percent of the vote to Bono Mack's 47.1 percent.[9]

As a principal at Faegre Baker Daniels Consulting, Bono advises clients on telecommunications, energy, health care, land management and water policy sectors, as well as strategic communications. She works with telecommunications companies to "develop thoughtful policies that grow the Internet economy and maximize broadband networks throughout the U.S."[10] In June 2013, a group of leading telecommunications firms announced formation of the 21st Century Privacy Coalition, which focuses on updating U.S. privacy and data security laws. Mary Bono and Jon Leibowitz, former Federal Trade Commission chairman, were named co-chairs of the coalition.[11]

In 2018 she was interim CEO of USA Gymnastics for 3 days.

Mary Bono served in Congress for 15 years, where she worked on legislation and issues related to intellectual property, energy, health, telecommunications, privacy and more. Her legislative work includes a bill that calls for country-of-origin labeling for fresh fruits and vegetables, as well as several energy-saving bills to reward companies for utilizing clean burning fuel technologies and increase the energy-efficiency of federal buildings. In 2000, Bono helped pass legislation that established the Santa Rosa and San Jacinto Mountains National Monument in the Palm Springs region. The House of Representatives passed her Securely Protect Yourself Against Cyber Trespass (SPY ACT), which would protect an individual's personal information on the Web. Bono secured federal recognition of Frank Sinatra Day, which was to be every subsequent May 13. Also, Bono has sponsored legislation that provides funding for obesity studies and improved nutrition programs nationwide, autism research, and Federal funding under the Ryan White HIV/AIDS Act.[13] In 2011, her bill, H.R. 2715, was signed into law with bipartisan support to amend and improve the Consumer Product Safety Improvement Act of 2008.[14] The daughter of a veteran, Bono also played a key role in creation of much-needed VA clinics in Blythe and Palm Desert, California.[15]

National Journal gave Bono a 60% composite conservative score and a 40% compositive liberal score based on her 2012 voting record.[16] Bono followed the Republican Party line 89% of the time, according to Congressional Quarterly.[citation needed] In 2004, she received an 84% approval rating from the Christian Coalition of America, but this fell to 33% in 2008.[17] In 1999, she voted in favor of the Largent Amendment to ban adoption by same-sex couples in Washington, D.C.[citation needed] Bono has, however, voted twice against the Federal Marriage Amendment which would have banned same-sex marriage. She is pro-choice and NARAL Pro-Choice America gave her a 100% rating in 2012.[16] In June 2009, she voted for the American Clean Energy and Security Act, which would have implemented a national cap and trade system for greenhouse gas emissions.[18] In December 2010, she was one of fifteen Republican House members to vote in favor of repealing the United States military's "Don't Ask, Don't Tell" ban on openly homosexual service members.[19][20] In 2013, after losing reelection, Bono was a signatory to an amicus curiae brief submitted to the Supreme Court in support of same-sex marriage during the Hollingsworth v. Perry case.[21]

In 1998, Bono was added to the House Judiciary Committee by the Republican leadership in anticipation of the consideration of impeachment proceedings against President Clinton, thus becoming the only Republican woman on the committee.[22] Bono voted along party lines on all four motions for impeachment in both the committee and on the House floor,[23][24] despite other moderate Republican House members voting against Articles II, III, and IV.[24]

She has received numerous awards from such organizations as Americans for Tax Reform, National Federation of Independent Businesses, the National Association of Manufacturers, and the SunLine Transit Agency for her support of alternative fuel technologies.[13] She signed the Taxpayer Protection Pledge.[25]

Bono was chairwoman of the House Energy Subcommittee on Commerce, Manufacturing and Trade. This committee debates legislation related to intellectual property, telecommunications, energy and healthcare. She was the first Republican woman to chair this subcommittee. She was co-chair of the Congressional Caucus on Prescription Drug Abuse.[26] In 2012, she formed and chaired the House Women's Policy Committee, which included 24 female Republican lawmakers from 17 states.[27]

We all know and respect Mary Bono for her commitment to drug abuse prevention, treatment and recovery. Specifically, Mary drew national attention to prescription drug abuse and made it a major focus before it was ever named an epidemic. She served as co-chairman of a congressional caucus on prescription drug abuse and the Youth Drug Prevention Caucus. Now Mary represents a wide array of interests as senior vice president for Faegre Baker Daniels Consulting, but, she's also staying very active on the drug issue as a board member of CADCA.[28]

In addition to serving on CADCA's board, Bono is the honorary chairman of Mothers Against Prescription Drug Abuse[29] and the honorary chair of Rally2Recovery.[30] She has spoken and presented awards at numerous events in support of prevention and recovery, including the Association of Recovery Schools Conference, America Honors Recovery, Recovery for Life Gala and the Annual Drug-Free Kids Campaign Awards Dinner.[31]

Bono serves on the Tribute Committee of the Navy SEAL Foundation, which focuses on honoring SEALs and supporting their families.[32]

In August 2013, Bono was a panelist at the National Journal's Women 2020 event and discussed her experiences as a woman in Congress and work that still needs to be done regarding gender equality.[33]

She has been the subject of numerous profiles for a wide array of publications and television shows, including People, Capital Style, Elle, Entertainment Tonight, Esquire, George, Good Housekeeping, Hello!, Ladies' Home Journal, and PBS. Bono's national profile increased significantly in 1998 when she sat on the House Judiciary panel to consider impeachment articles against Bill Clinton.[34]

She was named one of the "Most Fascinating Women of 1998" by Ladies' Home Journal magazine in conjunction with CBS Television. She was also selected by the former George magazine as one of the 20 most fascinating women in politics. In 2008, she was named the "Seventh Hottest Politician in the World" by Maxim.

In 1986, she married actor/singer Sonny Bono and moved to Palm Springs where the two operated a restaurant they owned. Sonny Bono served as Mayor of Palm Springs from 1988 to 1992 before being elected to Congress in 1994. During her marriage to Sonny Bono, Mary took courses in Scientology but never took to the religion. After Bono's death in 1998, she began dating Brian Prout, drummer of the country music band Diamond Rio.[35] The two became engaged in 2001 but did not marry.[36][37]

In 2001, she married Wyoming businessman Glenn Baxley about 18 months after they met in Mexico. They filed for divorce in 2005.[38] On December 15, 2007, Bono married Congressman Connie Mack IV (R-FL) in Asheville, North Carolina.[39] In May 2013, the couple announced they had separated on amicable terms and divorced later that month.[40]

Mary Bono has a son born in 1988, and a daughter born in 1991, from her marriage to Sonny Bono. In addition to her family, Bono has interests in music and outdoor activities such as hiking and camping. In the April 2008 edition of Golf for Women magazine, she was listed as "one of the 50 most powerful women who play golf."[41]

After attending a lecture by mountaineer-turned-humanitarian Greg Mortenson, Bono worked with him to aid his efforts to build schools for girls in the mountainous regions of Pakistan. Bono is quoted in Mortenson's book Three Cups of Tea as saying "I've learned more from Greg Mortenson about the causes of terrorism than during all our briefings on Capitol Hill."[42]