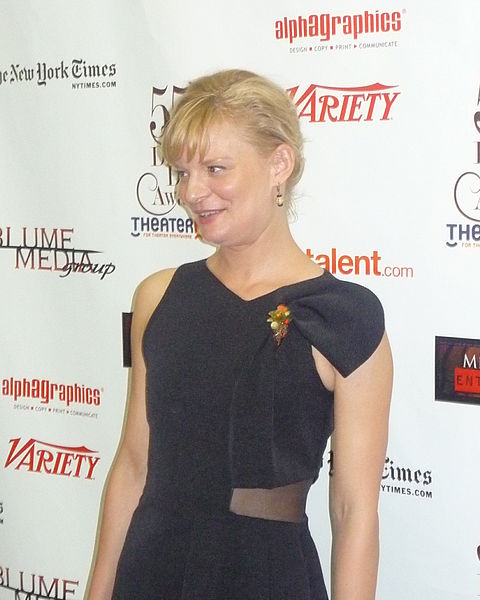 She is recognized on Broadway for her roles in The Coast of Utopia (2006-2007), Top Girls (2007-2008), Pal Joey (2008-2009) and Shining City (2006-2007). She has performed in theatre productions of The Playboy of the Western World, A Midsummer Night's Dream, The Glass Menagerie, The Sisters Rosensweig, and Uncle Vanya. She returned to Broadway in the fall of 2014 in a revival of A Delicate Balance co-starring Glenn Close and John Lithgow.[1]

Plimpton most recently starred in The Real O'Neals, an ABC sitcom that aired from March 2016 to March 2017.[2][3][4] In 2009 Plimpton portrayed a helpless mom being robbed by two criminals in the music video "Bully" by Three Days Grace.

Plimpton was born in New York City. She is the daughter of actors Keith Carradine and Shelley Plimpton. Her parents met while performing in the original Broadway run of Hair.[6] Her paternal grandfather was actor John Carradine.[7][8]

She is an eighth cousin, once removed of writer and editor George Plimpton,[9][10][11][12] and, despite the different spelling, cartoonist Bill Plympton.[13] She attended the Professional Children's School in Manhattan.[14] Her first stage appearance was when her mother brought her on stage in costume for the curtain call of the short-lived Broadway play The Leaf People then another play in The Ass and the Heart.[15]

Plimpton began her career as a model, securing an early 1980s campaign for Calvin Klein, making an impression as a sophisticated but tomboyish little girl.[16] She made her feature film debut in 1981, when at the age of eleven, she had a small role in the film Rollover.[17] In 1984, she appeared in the Deep South drama The River Rat opposite Tommy Lee Jones, as his "hoydenish daughter".[18] Her breakthrough performance was as Stef Steinbrenner in the 1985 film The Goonies.[16][19][20] She also appeared that year on the sitcom Family Ties.

This began Plimpton being cast in the role of a rebellious tomboy,[16] beginning with her performance as the Reverend Spellgood (Andre Gregory)'s daughter in the 1986 film The Mosquito Coast, starring Harrison Ford.[16] The critically praised but commercially unsuccessful 1987 film Shy People (co-starred with Barbara Hershey and Jill Clayburgh)[21] was followed by a performance in the 1988 ensemble comedy Stars and Bars.[20][22] This was released shortly before Running on Empty, an Academy Award-nominated film starring River Phoenix,[23] for which she was nominated for a Young Artist Award.

In her late teenage years, Plimpton was also active in theater, performing in regional theater in Seattle, Washington, where her mother was living at the time.[24] She also began a career making small independent film appearances with supporting roles in big-budget films. She appeared in the 1988 Woody Allen film Another Woman.[25] She co-starred with Jami Gertz as a cancer patient in the German film Zwei Frauen (1990) (released in America as Silence Like Glass).[26] The film was nominated for Outstanding Feature Film at the German Film Awards.[27] Plimpton shaved her head to play a cancer patient in Zwei Frauen.[28]

She played the role of the independent teenage daughter of Dianne Wiest in Parenthood. Plimpton appeared with Joaquin Phoenix (then credited as Leaf Phoenix), who portrayed her brother.[29] Parenthood grossed over $126 million[30] and received two Oscar nominations,[31] one of her most successful movie appearances since The Goonies.

Plimpton appeared in the Robert De Niro 1990 film Stanley & Iris in a supporting role.[32] She also appeared in the 1991 TV movie A Woman At War as the lead, "Helene Moskiewicz", alongside Eric Stoltz.[33]

Plimpton played the starring role of "Samantha" in the film Samantha (1992).[34] She appeared as an activist in the independent film Inside Monkey Zetterland released in 1993.[35]

She had a featured role in the film Josh and S.A.M. (1993) as a runaway who takes care of the two boys.[39][40] She played the lead in The Beans of Egypt, Maine of the Carolyn Chute novel The Beans of Egypt, Maine.[41] Plimpton also appeared as herself in the independent film by Eric Schaeffer My Life's in Turnaround (1993), a movie about filmmakers trying to make a movie.[42] She appeared as a close friend of radical feminist Valerie Solanas in the film I Shot Andy Warhol (1996).[43]

In 1997, the Showtime Network cast Plimpton as the female lead in the television film, The Defenders: Payback. Two more episodes (The Defenders: Choice of Evils and The Defenders: Taking the First) were aired in 1998.[44] This show was a retooling of the classic television show by the same name, and the characters were descendants of Lawrence Preston, a role reprised by actor E.G. Marshall. Plimpton played the granddaughter, "M.J. Preston".[45] [46] The intent was to spin the program off as a series, but Marshall died in 1998. The decision was made to not continue production due to Marshall's death.[47]

Plimpton became involved with The Steppenwolf Theatre Company in Chicago, appearing in Hedda Gabler (2001) among others.[48]

In 1998 she appeared in the John Waters film Pecker. The film received mixed reviews. For example, the SF Gate reviewer wrote that "...Waters' patented brand of off-color fun is watered down." but wrote that Plimpton's work was "solid".[49] The 1999 film 200 Cigarettes received generally negative reviews, but the AllMovie reviewer wrote of Plimpton: "...woefully underappreciated Martha Plimpton gets laughs as a bundle of neuroses who grows more and more stressed out as people fail to appear for her party..."[50]

In 1999, Plimpton had a recurring role in the sixth season of the NBC medical drama ER as "Meg Corwyn".[44]

In 2001, she co-starred with Jacqueline Bisset in The Sleepy Time Gal.[51] In 2002, she appeared in the documentary Searching for Debra Winger and was nominated for a Primetime Emmy Award[52] for her guest appearance on the television drama Law & Order: Special Victims Unit. Plimpton was the voice of Miss Crumbles in the 2004 animated film Hair High by Bill Plympton.[53] In 2004, she guest-starred on an episode of 7th Heaven.[44] She wrote the episode of the show entitled "Red Socks", which aired in 2005.[54] She had a recurring role on the NBC show Surface (2005-06).[55]

From October 2006 to May 2007, she was in the stage play The Coast of Utopia, a trilogy of plays by Tom Stoppard at Lincoln Center.[56] She won a Drama Desk Award and was nominated for a Tony award, Featured Actress in a Play.[56] From August to September 2007 Plimpton appeared in A Midsummer Night's Dream in the Public Theater Shakespeare in the Park production as "Helena".[57]

She co-founded a production company, Everything is Horrible, which has produced short films for the Internet.

Plimpton received her second nomination for a Tony Award in 2008, Best Performance by a Featured Actress In a Play, for her work in Top Girls at the Biltmore Theater.[58] In November 2008, she earned a positive review from Ben Brantley in The New York Times for her role as Gladys Bumps in the Roundabout Theatre Company production of Pal Joey on Broadway. "...the ever-daring Ms. Plimpton exudes a been-there, frowzy sensuality that summons a host of hard-bitten dames from 1930s movie melodramas. Leading the nightclub act 'That Terrific Rainbow,' she has the period style down pat and a more than passable voice."[59] She received her third consecutive Tony nomination, for Best Featured Actress in a Musical.

Plimpton appeared in the 2008 Entertainment Weekly photo issue spread as one of "The Hardest Working Actors In Showbiz". She appears in the spread with Lance Reddick, Celia Weston, John Slattery, Bobby Cannavale, James Rebhorn, Lynn Cohen, Matt Servitto and Bob Balaban. Plimpton said in the write-up, "I went to jury duty the other day, and somebody said, 'You always play drug addicts!' I've played a few on TV, and I imagine because the shows get replayed, it seems like more. But yeah, people tend to see me as this pregnant teenage heroin addict."[60]

In November 2009, Plimpton signed on for the Fox sitcom Raising Hope. The show premiered on September 21, 2010, receiving strong reviews for Plimpton and the pilot. The New York Times called Raising Hope "the most promising" of "the best new fall shows,"[61] and said "Plimpton isn't the only reason 'Raising Hope' could be the best new sitcom of the season, but she is the main reason."[62] Plimpton was nominated for the Primetime Emmy Award for Outstanding Lead Actress in a Comedy Series for her portrayal as Virginia Chance in Raising Hope.

From 2009 to 2013 she had a recurring role on the CBS legal drama The Good Wife.[44] She played attorney Patti Nyholm who appeared through four seasons. Her performance earned her a Primetime Emmy Award for Outstanding Guest Actress in a Drama Series in 2012.

On December 15, 2010, Chicago's Steppenwolf Theatre announced that Plimpton would be the guest of honor at their second-annual "Salute to Women in the Arts".[64]

In 2010, she starred in Ed Gass-Donnelly's independent crime thriller Small Town Murder Songs, and was given a trophy for best actress by the Whistler Film Festival.[65]

In 2014, Plimpton returned to Broadway as Julia, the daughter of Glenn Close and John Lithgow in a revival of Edward Albee's A Delicate Balance. The limited engagement ran 18 weeks at the Golden Theatre and co-stars Lindsay Duncan, Bob Balaban and Clare Higgins.[1]

Plimpton is an abortion rights campaigner who has lobbied Congress on behalf of Planned Parenthood and is on the board of directors of "A Is For..."; according to the organization's website, Plimpton has been politically active in abortion rights since her teenage years and speaks at campuses and rallies.[66]

In 2014, Plimpton wrote a lengthy article decrying both U.S. Supreme Court decisions in Burwell v. Hobby Lobby and McCullen v. Coakley and revealing in part that she herself has had an abortion more than once.[67] She wrote that her purpose was "A) to contribute to the dismantling of an oppressive, artificial and unfair shaming of women who seek abortion care, B) make clear just how normal, common, and healthy a decision it is for the women who make it, and C) to encourage women who are part of this one third to be unashamed and come out of the abortion closet."[67] In September 2017, Plimpton created controversy when she again said she had multiple abortions, and said one she received at Planned Parenthood in Seattle was her "best one."[68]

She has also advocated for LGBT rights causes. In a Twitter post, she stated that transgender rights and abortion rights are linked.[69]

In 2008, Plimpton performed a duet with singer Lucy Wainwright Roche on Roche's EP 8 More, singing the Bruce Springsteen song Hungry Heart. The two had performed the song in 2008 at Joe's Pub and later in 2008 at the Zipper Factory.[70]

In 2010, she sang another Springsteen song, Thunder Road, on the public radio program Studio 360 with Kurt Andersen, accompanied by whistler Eric Gilliland.[71] She has appeared multiple times as a guest on public radio's The Leonard Lopate Show, and performed in a roast of Lopate celebrating the 25th anniversary of his radio program.[72]

Plimpton is on the board of directors of The Players,[73] a New York City social club founded in 1888 by actor Edwin Booth. In 2009, she was profiled by The New York Times for their " A Night Out With..." series, in which Plimpton hosted an evening of poker at The Players.[74]

In January 2010, she performed a one-woman show, Martha Plimpton Sings? for the Lincoln Center's American Songbook program.[75] This show explored her experiences growing up in 1970s New York City. Her performance, well received by critics, included songs "Jolly Coppers on Parade", "Woman Is the Nigger of the World", and The Smiths's "Ask" tied together with humorous monologues.[76]

River Phoenix and Plimpton on the red carpet at the 61st Academy Awards, 1989

The Public Theater's Shakespeare in the Park

In film, Plimpton was nominated for three Young Artist Awards: Exceptional Performance by a Young Actress for Goonies, [101] Best Young Female Superstar in Motion Pictures for The Mosquito Coast,[102] and Best Young Actress in a Motion Picture for Running on Empty (1987-1988).[103] She was nominated for an Independent Spirit Award in 1987 in the Best Supporting Female category for her performance in Shy People.[104]

Report a problem
Write to Martha Plimpton at FanPal • 2020