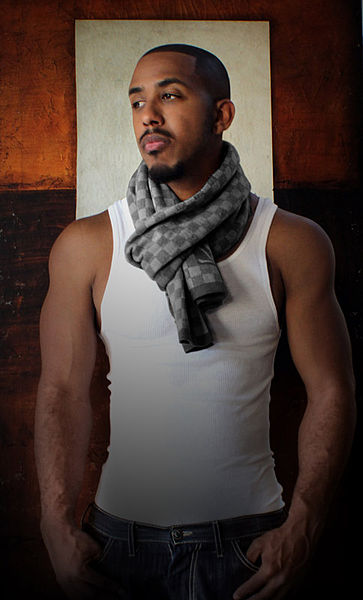 Marques Barrett Houston (born May 14, 1981) is an American R&B singer, songwriter, and actor. A member of the R&B singing group Immature/IMx from 1990 until 2001, he went solo in 2003. As an actor, he is best known for his role as Roger Evans in the television comedy Sister, Sister.

Marques Barrett Houston was born on August 4, 1981, in Los Angeles, California, to Michael and Carolyn Houston. He is also the older cousin of B2K's J-Boog. Houston began acting at an early age.[1]
Read more...

In 1992, Houston became a founding member of the R&B group Immature (also known as IMx). The members of the group includes Jerome "Romeo" Jones and Don "Half Pint" Santos (later replaced by Kelton "LDB" Kessee), along with Chris Stokes, who is acting for his job as their manager. At this period, Houston went by the nickname "Batman". In 1999, the group underwent a name change, however, it continued on to release two albums under the name IMx such as Introducing IMx (1999) and IMx (2001). The group also branched out into acting and appeared such shows as A Different World, Sister, Sister. Later they recorded some soundtracks to the film House Party 4: Down to the Last Minute, before disbanding in 2002.

Houston released his third solo album, Veteran, on March 20, 2007. The album featured the singles "Like This" (featuring Yung Joc), "Favorite Girl", "Circle" and "Wonderful". In the United States, Veteran debuted (and peaked) at number 5 on the Billboard 200[6][7] and debuted at number 1 on Billboard's Top R&B/Hip-Hop Albums,[6][8] marking this release as Houston's first number-one solo album.

Houston released his fourth solo album, Mr. Houston on September 29, 2009. It featured the singles, "I Love Her" and "Sunset". Videos for the album tracks "Body" and "Date" were released[by whom?] online in 2008. "How I Do" and "Case of You" received video premieres in 2009, followed by a video for "Tonight" in 2010. On September 14, 2010, Houston released his fifth studio album, Mattress Music, which contained the singles "Kickin' & Screamin' and "Pullin' on Her Hair". A video for a third, "Ghetto Angel" premiered in 2011. Houston announced on 106 & Park that IMx planned to record another group album together for 2011.

In October 2012, Marques Houston announced a new studio album, Famous slated for release August 27,[9] and released "Speechless" as a promotional preview via free digital download. The first single off the album was "Give Your Love a Try" featuring Problem made available on iTunes.

Following the release of his previous album, Houston reunited with IMx and did some touring in addition to releasing a new single "Let Me Find Out" in late 2014.[10]

The next year, he released a new solo single "Need You" from the soundtrack of his film Will to Love.

In 2016, Houston released a new single "Complete Me" to digital/streaming outlets.[11] He premiered the music video for the song in September.[12] It was slated to be the first single off his new album White Party set for release later that year.[13]

In 2017, he recorded a trio of new songs for the film 'Til Death Do Us Part for which he wrote the screenplay for. His song "Together" was released as a single from the soundtrack.

Houston continues to work with former bandmate Jerome "Romeo" Jones (as of 2004[update] who was known as Young Rome). Houston made guest appearances on Jones' album Food for Thought (2004) on songs titled "Sexapade" and "What Cha Doin' Tonight", while Jones made a guest appearance on Houston's album Naked on the song titled "All Because of You". The two also collaborated on "For Your Love", a song from an unreleased album by Young Rome. Houston made guest appearances on fellow TUG Entertainment artist Mila J's single "Good Lookin' Out" and Yung Joc's single "1st Time"; he made appearances in both music videos. Houston featured on 50 Cent's remix to the hit single "Candy Shop", which also featured was the group Dame Four.

Houston made his acting debut in the animated comedy film Bébé's Kids (1992) in which he was the voice of Khalil, the leader and oldest child of the titular "Bébé's Kids". Houston later appeared in House Party 3 (1994), where he played a fictional version of himself along with fellow Immature bandmates Jerome "Romeo" Jones and Don "Half Pint" Santos. In the film, they portrayed Kid's trouble-making younger cousins who aspire to become musicians. Houston's breakthrough role came when he won the part of Roger Evans in the television comedy show Sister, Sister, playing the next-door neighbor of identical twin sisters Tia Landry and Tamera Campbell (Tia and Tamera Mowry). Marques played the role for five of the show's six seasons. The show wrote his character out of the script during the fifth season, but he made a guest appearance in the series finale. In 1997, he had a brief cameo in the movie "Good Burger", a spin-off from a sketch on the Nickelodeon show "All That" starring Kenan Thompson and Kel Mitchell. He played Jake, Kenan's friend. Houston and his IMx (formerly Immature) band members made an appearance in Destiny's Child music video for the single "No, No, No Part 1" off their 1998 album The Writing's on the Wall. In 1999, shortly after Houston's run on the Sister, Sister show ended, Marques had a brief cameo in Destiny's Child's video rendition of The Writing's on the Wall single Jumpin', Jumpin' directed by Joseph Kahn.[14]

He also played the character Elgin Barrett Eugene Smith III in the 2004 film You Got Served. Following You Got Served, in both live-action and voiceover, he portrayed Dumb Donald in the film adaptation of Fat Albert, based on Bill Cosby's popular cartoon series Fat Albert and the Cosby Kids. From 2005 to 2006, Houston starred in his own television series, Cuts as Kevin Barnes, which was a spin-off of One on One. Despite good ratings, the show only lasted two seasons due to UPN merging with The WB to become The CW which caused Cuts along with many other UPN shows to get cancelled. In 2007 Houston starred in the horror film Somebody Help Me. He then starred in the sequel, Somebody Help Me 2 in 2010. In 2012 Houston starred in a kids hip hop dance battle film, Battlefield America. He portrayed Sean Lewis, an ad executive who serves as a dance teacher after receiving a sentence of community service; however, he does not dance in the film.He Also Stars In A Weekend With The Family with Karrueche Tran.

Houston previously dated singer Jamila "Mila J" Chilombo[15][16] and My Wife and Kids actress Jennifer Freeman[17] with whom he had starred with in the 2004 hit film You Got Served. Rumors surfaced in 2007 that Freeman and Houston had gotten engaged, but they eventually broke up a few years later.

He was in a relationship with Marlena Campbell since 2008.[18] Omarion confirmed their relationship publicly in March 2010 on celebrating their two-year anniversary on his Twitter page.[19] However, they quietly broke up in late 2017.

Report a problem
Write to Marques Houston at FanPal • 2021