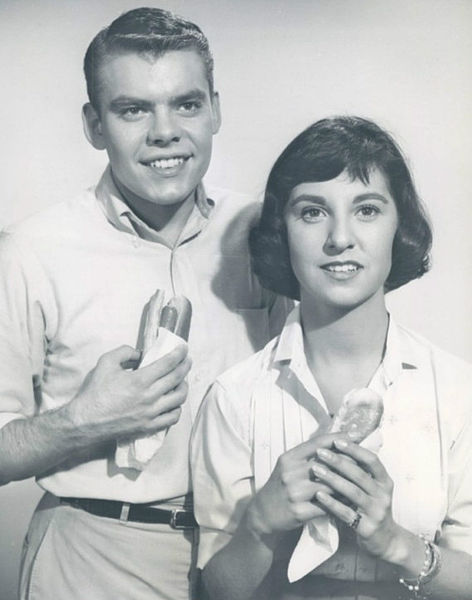 Margaret Julia "Marlo" Thomas (born November 21, 1937) is an American actress, producer, author, and social activist known for starring on the sitcom That Girl (1966-1971) and her award-winning children's franchise Free to Be... You and Me. She has received four Emmys, a Golden Globe, and the George Foster Peabody Award for her work in television, and she has been inducted into the Broadcasting and Cable Hall of Fame. She has also received a Grammy award for her children’s album Marlo Thomas and Friends: Thanks & Giving All Year Long. In 2014, she was awarded the Presidential Medal of Freedom by President Barack Obama at a White House ceremony, the highest honor that a civilian can receive.[2]

Thomas serves as National Outreach Director for St. Jude Children's Research Hospital, which was founded by her father Danny Thomas in 1962. She created the Thanks & Giving campaign in 2004 to support the hospital.

Marlo Thomas was born on November 21, 1937, in Detroit, Michigan, the eldest child of comedian Danny Thomas[3] (1912 - 1991) and his wife, the former Rose Marie Cassaniti (1914 - 2000). She has a sister, Terre, and a brother, Tony Thomas, who is a television and film producer. Her father was a Roman Catholic Lebanese American and her mother was Sicilian American.[4] Her godmother was Loretta Young.[5]

Thomas was raised in Beverly Hills, California. Her parents called her Margo as a child, though she soon became known as Marlo, she told The New York Times, because of her childhood mispronunciation of the nickname. She attended Marymount High School in Los Angeles. Thomas graduated from the University of Southern California with a teaching degree: "I wanted a piece of paper that said I was qualified to do something in the world," she said. She also was a member of the sorority Kappa Alpha Theta.[6]

Thomas appeared in many television programs including Bonanza, McHale's Navy, Ben Casey, Arrest and Trial, The Joey Bishop Show, The Many Loves of Dobie Gillis, 77 Sunset Strip, and The Donna Reed Show, among others. Her big break came in 1965 when she was cast by Mike Nichols in the London production of Neil Simon’s Barefoot in the Park, co-starring Daniel Massey, Kurt Kasznar, and Mildred Natwick. In 1986, she was once again cast by Nichols on Broadway in Andrew Bergman’s Social Security, co-starring Ron Silver and Olympia Dukakis.

Thomas and her father, Danny, were cast as Laurie and Ed Dubro in the gripping 1961 episode, "Honor Bright", on CBS's Dick Powell's Zane Grey Theatre. In the story line, Dubro, a former convict, opposes his daughter's plans to marry a neighbor, Vince Harwell (Ed Nelson). When Harwell's current wife suddenly arrives at the church to stop the wedding. Laurie flees and is crushed to death by a team of horses racing through town. Dubro plots a unique way to punish Harwell, but it costs him his own life in the process.[7]

Thomas (center) with co-star Ted Bessell (left) and guest star Mary Frann (right), in a 1968 photo from That Girl

Thomas starred in an ABC pilot called Two's Company in 1965. Although it did not sell, it caught the attention of an ABC programming executive. He met with Thomas, and expressed interest in casting her in her own series. With their encouragement, Thomas came up with her own idea for a show about a young woman who leaves home, moves to New York City, and struggles to become an actress. The network was initially hesitant, fearing audiences would find a series centering on a single female uninteresting or unrealistic.

The concept eventually evolved into the sitcom entitled That Girl, in which Thomas played Ann Marie, a beautiful, up-and-coming actress with a writer boyfriend, played by Ted Bessell. The series told the daily struggles of Ann holding different temporary jobs while pursuing her dream of a career on Broadway. That Girl was one of the first television shows to focus on a working, single girl who did not live with her parents, and it paved the way for many shows to come. Thomas was only the second woman to produce her own series, following Lucille Ball. That Girl aired from 1966 to 1971, producing 136 episodes, and was a solid performer in the Nielsen ratings.

In 1971, Thomas chose to end the series after five years. Both ABC and the show's sponsor, Clairol, wanted the series finale to be a wedding between the two central characters, but Thomas rebuffed them, saying that she felt it was the wrong message to send to her female audience, because it would give the impression that the only happy ending is marriage. That Girl has since become popular in syndication.

After That Girl, eager to expand her horizons, Thomas attended the Actors Studio,[8] where she studied with Lee Strasberg until his death in 1982, and subsequently with Strasberg's disciple Sandra Seacat. When she won her Best Dramatic Actress Emmy in 1986 for the TV movie Nobody’s Child, she thanked both individuals.

In 1973, Thomas joined Gloria Steinem, Patricia Carbine, and Letty Cottin Pogrebin as the founders of the Ms. Foundation for Women, the first women’s fund in the US. The organization was created to deliver funding and other resources to organizations that were presenting liberal women’s voices in communities nationwide.

In 1976, Thomas made a guest appearance on the NBC situation comedy The Practice as a stubborn patient of her father Danny Thomas's character Dr. Jules Bedford, and the chemistry of father and daughter acting together made for touching hospital-room scenes.

Thomas's Broadway theatre credits include Thieves (1974), Social Security (1986), and The Shadow Box (1994), and in 2011, she starred as Doreen in Elaine May's comedy George Is Dead in Relatively Speaking during a set of three one-act plays (The New York Times called Thomas' performance "sublime").[10] The other two plays were written by Woody Allen and Ethan Coen.

Off-Broadway, Thomas has appeared in The Guys, The Exonerated (in which she also appeared in Chicago and Boston, co-starring with Brian Dennehy), The Vagina Monologues and Love, Loss, and What I Wore. Also off-Broadway, she appeared opposite Greg Mullavey in the 2015 New York debut of Joe DiPietro's play Clever Little Lies at the Westside Theatre.[11] Regional theatre productions include: Who’s Afraid of Virginia Woolf? at the Hartford Stage; Woman In Mind at the Berkshire Theatre Festival; Paper Doll, with F. Murray Abraham at the Pittsburgh Public Theatre; and The Effect of Gamma Rays on Man-in-the-Moon Marigolds at the Cleveland Playhouse. In 1993, she toured in the national company of Six Degrees of Separation. In the spring of 2008, she starred in Arthur Laurents's last play, New Year's Eve with Keith Carradine, at the George Street Playhouse.

Thomas has published seven best-selling books (three of them #1 best-sellers): Free to Be... You and Me; Free to Be... A Family; The Right Words at the Right Time; The Right Words at the Right Time, Volume 2: Your Turn; Marlo Thomas and Friends: Thanks & Giving All Year Long (the CD version of which won the 2006 Grammy Award for Best Spoken Word Album for Children); her 2009 memoir, Growing Up Laughing; and It Ain't Over...Till It's Over: Reinventing Your Life and Realizing Yours Dreams Anytime, At Any Age.

Thomas serves as the National Outreach Director for St. Jude Children's Research Hospital in Memphis, Tennessee, which was founded by her father, Danny Thomas. She donated all royalties from her 2004 book and CD Marlo Thomas and Friends: Thanks & Giving All Year Long (also produced with Christopher Cerf) and her two Right Words at the Right Time books to the hospital.

Thomas is the recipient of four Emmy Awards, a Golden Globe Award, a Grammy Award, a Jefferson Award, and the Peabody Award.

In 1979, the Supersisters trading card set was produced and distributed; one of the cards featured Thomas's name and picture.[12]

In 1996, she was awarded the Women in Film Lucy Award in recognition of her excellence and innovation in her creative works that have enhanced the perception of women through the medium of television.[13]

On November 20, 2014, the Marlo Thomas Center for Global Education and Collaboration was opened as part of St. Jude's Children's Research Hospital.[14] Hillary Clinton presided over the ribbon-cutting ceremony.

On November 24, 2014, President Barack Obama awarded Thomas the Presidential Medal of Freedom, the highest honor an American civilian can receive, at a White House ceremony.[15]

Thomas was in a long relationship with playwright Herb Gardner.[3]

Later, when she appeared in 1977 as a guest on Donahue,[16] the television talk show, she and its host Phil Donahue "fell in love at first sight."[citation needed] They were married on May 21, 1980.[17] Thomas has five stepchildren as a result of that marriage.